100 years ago this Sunday the guns fell silent as the first world war came to an end, a huge number of people lost their lives in order for this country to remain free and not ruled by a foreign nation hell bent on domination of Europe. The Royal British Legion raise awareness and funds to look after the defenders of our nation, and I for one am proud to wear a poppy.

Thirty years ago I won my first Poppy match (on Chequers straight) and I would have loved to have won it again today. The rain we've had in the last couple of days was unfortunately just a tad too much and pushed the river up and coloured, I took a look Saturday afternoon at the Crane and it was going through quite a bit. It meant one thing to me, bream on the feeder and a draw up at Newbridge would be required to win. I got to the draw at Frys in plenty of time, but was disappointed to be told I couldn't order a breakfast (they couldn't cope) and instead had to have a bacon roll (well a roll with one tiny piece of bacon in it). It was as ever great to see so many anglers fishing, and some people who I don't see very often, Mike Shellard, Terry Ellis, Mike Spencer, John Amatto, Mike Pierce, Nigel Bateman, Harry Muir, I could go on and on and on!  After the two minute silence the draw began and I was quite close to the front, I prayed to pull out an early number to be up Newbridge, but alas peg 88 was looking at me. I'd seen the peg yesterday and knew it was just below the boys hole where the Commercial House was won last week with 29lb of skimmers. Of course this gave me a lot of hope but the river last week was low and clear and I hoped the skimmers were still there.

A nice short walk just over the cattle grid, and past Craig Fletcher on the end peg, then John Smith, and then me, three Gasheads in a row lol! Jan Mazyck was above me. This peg is deep, and tends to go deeper as you go downstream, the flow was quite fast in close but about two thirds over the flow slows right up. 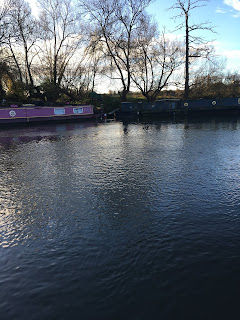 As the guy last week had caught on the pole I wanted to set that up, but when I put a flat float up (8g it just wasn't right and the depth of the peg plus the flow warranted a much bigger float which I don't have. I decided to put the pole away and leave the fast boily water alone. That meant it was just going to be a groundbait feeder today, I set up a 30g job with the usual 14 PR355 to 0.165 exceed. Job done. I had plenty of groundbait mixed up and I made up 8 balls containing, dead pinkie, casters and chopped worm. When the match started I had organisers Colin Ellaway and Paul Benson behind me, so I hoped my 8 balls would land very close as I launched them out to the slow water, all bar one ball landed decent I thought. I wasn't expecting a barrage of bites, but thought I would start with the standard 3 red maggots on the hook and see what happened. Second cast and a roach about 3oz was swung in. Sadly I never had another bite on any baits until the hour mark when I had another small roach.

I went for a quick walk, Jan hadn't had a bite but John and Craig were getting a few roach in their steady swims. I went back and tried three fluro maggots, I had a 6oz eel on this bait and so decided to stick with it, a couple of casts later another bite and a hybrid of about 6oz. The next two casts produced two more hybrids of the same size or a bit smaller. Then no more bites at all. I'd had phone calls from Glenn Bailey at Newbridge who was struggling, and Shane Caswell who was behind the pumphouse at Newbridge and struggling to wet a line because of the boats in front of him. It sounded like the match was fishing hard.

I plugged away on the feeder, keeping lots of caster and worm going in, and trying various hook baits. I never had a bite on a lobworm, but I started to get the odd bite from roach on a dendrabena with two maggots. Three hours in and I had only missed one bite, and had 1 eel, 5 roach and 3 hybrids, hardly flying. I wasn't feeling the peg was going anywhere, I was hardly getting a bite and it seemed the fish were not there / not feeding. Below me John and Craig had now had a few skimmers on the feeder and were well in front of me.

The sun was in my face and I had to move the rod and turn my head and hat at silly angles to be able to see my quivertip. However, about 90 minutes to go I had a seriously good bite which I could not miss seeing, but when I picked up the rod everything was solid. I could not feel a fish on and in the end I pulled for a break and the hooklength snapped. I guess I either missed the bite or it was a liner. Still it cheered me up a bit. Not long after Darren Gillman came up for a walk and he could see I was struggling, he told me that he had caught a 3lb+ chub of this peg last year.

Another strange indication and then nothing again. Darren walked on not having seen me catch but a few minutes later at 2:10pm with 50 minutes left I had another better bite and when I struck I knew it was a bream. It did go a bit when it got into the flow but I always had it under control and soon had it in the net. I wasn't massive, but at 3 1/2lb was more than welcome. Two casts later and for a few seconds I thought it was another bream, but alas an eel again. Thirty minutes to go and I'm still on worm and two maggots and another bite, bang this fish feels really heavy,could be a big bream (but there aren't many big ones down here) but as I played it I thought chub, and indeed it was. It looked like 3lb+ and must have been Darren's chub, lol. I never had another fish in the last 30 minutes.

With those two fish I now thought I had 9lb, with John and Craig only admitting to 5lb I thought I had the section won. Craig weighed in 6lb 5oz, and he lost a bream at the end, John weighed in 8lb 6oz of skimmers, looked like the fish which had been caught the week before. My turn and the needle swung round to 10lb 5oz, with Jan and the angler above him struggling I won the five peg section. In fact as it turned out I was the top weight of the twenty pegs up the Crane. Thanks for the picture Mr Gillman. 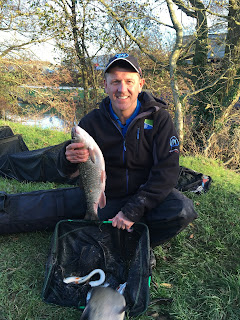 Didn't take long to get back to the results and get a pint and a roll. The rumour mill began and it seemed Dave Lewis had 5 bream and was likely to be top rod. Before the results though we had to get the raffle done, and once again Ray Bazeley had done well to get a great many prizes, many donated by local tackle shops. I managed to bag a couple of prizes so was happy enough, not so Glenn Bailey as both my winning tickets were next to his numbers, oops!

After the section money was paid out the main results were announced and here are the winners:-

11lb 14oz was last in the frame, and the top 8 were all at Newbridge. Think I was between 10th and 12th overall. Shame those skimmers had moved on, a few of those would have been handy.

It sounds like the match has raised over £1500 for the Poppy Appeal which is great news!

Congratulations to the framers, and especially the top three who are pictured below looking happy as they should be, well done lads. I'm fishing an open next week on Newbridge, with no rain forecast hopefully it could be a reasonable match. 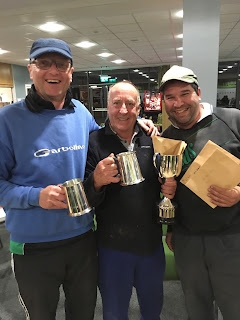