Two for the price of one

After a busy week and still not feeling that well after a few weeks of what seems an endless sore throat and feeling rough some days, I was happy to have a bit of a lie in Friday. I planned a pleasure fishing trip to The Bristol Avon at Saltford, on the free stretch above the Jolly Sailor. It's an area which seems to hold a lot of roach, and if the conditions are right bream, and I'm told some odd decent barbel. The bonus is you can park behind your peg. I had plenty of gbait, 1 1/2 pint caster, 2 pints of hemp and some maggots. The plan was ball it at 13m, and I did throw in 6 balls there and had bites straight away from roach but pike were a menace! I had enough, I threw another 6 balls in at about 6m and fished a 6m whip so I could avoid pike I hoped. Well it was a bite a chuck here all day, and by feeding little balls of gbait packed with hemp and caster regularly I caught roach on caster and just had a few bleak problems now and then. I had team mate Jack Jones watch me for a bit, not sure he was impressed by my ineptitude (whip fishing is not something I do a lot of ) but he did see me catch plenty and he saw pike chasing roach further out in the river. Terry Ellis also joined me and fished bread on a crowquill, he had 54 roach on it and so a good day for him. I ended up with a stack of fish, we tried to weigh them in with my landing net, but there were so many we couldn't let the net settle as the fish fell out. I had somewhere between 23lb and 25lb I guess. Lovely day. Picture below taken by Terry. 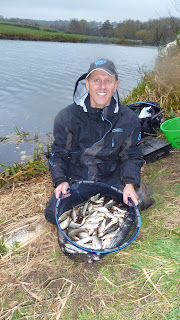 Sunday morning and fishing an open match at Newbridge, breakfast in Jarrett's cafe in Willsbridge, and I have to say it was really good, dead handy as it is very close to me! There were about 21 anglers fishing today and Kevin Dicks was sorting the draw and he had done some swim clearing too, so fair play. The river had gone clear after last weeks rain had run out, I was not sure where I wanted to draw but I did fancy a lazy day on the feeder lol. However, I drew out peg 7 in the little field and this is normally a pole peg good for roach (only spawny gits draw it with water on and catch bream on the feeder, like I did once lol). This year it has not been so good and last week in the Poppy Nigel Wyatt struggled for 3lb+ and the whole section was tough. Still different conditions this week.

There were six anglers in the little field, with Andy Curry on peg 1, peg 3 angler DNW, peg 5 was superstar Shane Caswell, peg 10 (recently cleared out by EA so we can fish it again) was another superstar Glenn Bailey, and another angler below him. My peg is only about 9 feet deep, and I'm not used to drawing such shallow pegs lately lol. Time was short and so setting up was just two pole rigs, 1g pencil float with 22 to 0.08, 2gm Silvers with 18 to 0.10. A feeder rod was set up in case bream showed and an eleven BB crowquill with 18 to 0.10. View from peg 7... 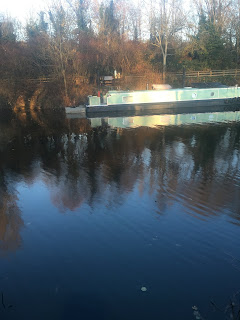 I started a couple of minutes after the official 10:15 start, I threw in 9 or 10 balls of gbait at 13m. I picked up the heavy pole rig and tried caster, no bites on this. Shane shouted down he had a pike take a fish first drop in. I went onto the light pole rig with a maggot and it was not good but I could get the odd bite from small roach. I think it was after 30 minutes that Shane came down fuming as he had already had 6 pike take fish and only had 2 roach in the net! I told Shane I had no pike trouble and then one had me, grrrr! After an hour I thought I only had a dozen fish, Glenn said he had 36 and so was kicking my ass. About 90 minutes into the match and I had given a pike some serious tooth ache and that seemed to get rid of it, I then had a decent hour catching small roach steadily. Of course the pike came back, and it was a big un, I pulled hard as I could on the heavier gear with all 13m of pole up in the air, but this pike went upstream and I felt the rig grate against a snag and then everything went solid. I had to pull the elastic back by hand and I lost the whole rig. I decided against setting another heavier rig, and would use the crowquill to try to avoid the pike. Running the light rig down the peg trying to catch I ran it a long way down the peg and a bite, I struck and it was solid, a bloody snag. I shipped back and then noticed the elastic going out, what the hell! I had a fish on, a big one too and I guessed a pike, but wasn't really sure. Whatever it was I finally lost it as swan into the margin and transferred the hook into a reed which popped up. When I took the reed off I noticed a scale on the hook, so I had foul hooked something, a bream I think.

The match continued with me getting spells of fish, it was frustrating as every time I felt like I was getting the fish lined up the pike would upset them. I continued to feed hemp and caster over the top of my gbait, and with about 75 mins to go I started to get bites right up under the loosefeed. I would cast the crowquill in, feed hemp, then caster and quite often the float was already under. The pike still managed to bite me off and go for another couple of fish, but the last hour the roach were bigger and I was winching them in and swung everything! It was hectic, and I must have had 6lb in that last hour and I caught either on caster or double red maggot. I guessed I had 12lb and thought Glenn must have more as he had caught on the pole all day and had not had a pike!

Kevin Dicks came along with the scales, he started with Andy Curry who had a great net of roach for 14lb 4oz. Shane managed over 11lb of roach despite having 19 pike strikes, more than my 12! My turn next and my fish went much more than I thought when Kev shouted 15lb 8oz. Glenn was next and I was shocked when he weighed 15lb exactly, I guess I overtook him in the last hour, only a couple of fish in it. Below Glenn the angler had 13lb, so the little field had fished really good! 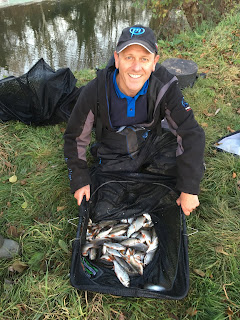 Back at the Crown pub and time for a good old chat and the results.. winner today (again) was Shaun Townsend with 21lb of roach from peg 28. Shaun also had a bonus rudd that was well over a 1lb. He did well considering he forgot his bait boxes, groundbait bowls, and still has my bungy that he "borrowed" from me last week lol. 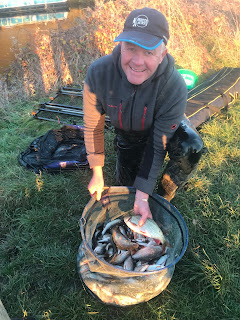 In second place was Kev Dicks with 16lb of roach from peg 16. A lot of small roach on a 8m whip.

Third place and last in the money was me, yay!

Section winners were Glenn Bailey. Kev Millard 13lb+ from peg 24, and Jeff Surmon won the last section with just 2 1/2lb! In fact after peg 33 the weights were awful with some anglers even blanking. It seems the roach have packed into the river from peg 30 up to peg 1, they may well keep on going upstream who knows. Today there was not a single bream caught, almost unheard of at Newbridge!
Posted by Tim Ford at 20:40