It is not often I fish Saturday and Sunday but this was a chance to do so and I was going to behave myself Friday night by staying away from the booze.

It was some time ago that by chance I was on Facebook and saw Todber Manor Fishery were promoting their Xmas match. Whilst I had not fished there for a long time I wanted to give it a go as it would be a big match, and in the winter you can get lucky of you draw on a shoal of carp. I met up at 7am with Martin Rayet and Joe McMahon and followed them down to Dorset where we had breakfast in the Riverside Cafe, very nice. Onto the fishery and said hello to lots of anglers that I have not seen for a while, and met one that I have conversed with on social media but never met, Jamie Rich who has a blog "Against Men and Fish". Good to finally meet you Jamie.

The draw was the usual scrum and eventually I got a peg, I had hoped for a bunghole that locals would give me lots of great vibes on, I got peg 5 on whitepost lake. I don't think I have ever fished this lake before and got info on it, generally was told it was great in summer and should be worth a few fish. The main thing I was told over and over was to fish maggots. 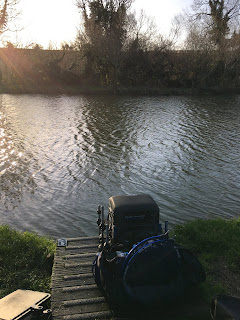 The weather was forecast to be rancid, and the wind was already nasty and forecast to be worse. I set up a maggot feeder and a straight lead for fishing to the far bank, with 0.15 to 16 GPM-B. I set up two pole rigs, a 4x16 with 0.13 to 16 SFL-B for fishing top set plus 3 sections, as far as I dared in the wind. I did set up another rig for fishing towards a tree on the bank but never had a bite here.

Just before the match I took a video and at the end you can see Steve Denmead two pegs up giving the thumbs up to me, about 5 minutes later a storm came over and was enough to break Steve Denmead's number 6 pole section, thumbs down.


I began the match like everyone else it seemed fishing on the tip rod to the far bank, though casting out was just hard work as the sun was right in my eyes and the whole lake in front of me was blinding! I began on a maggot feeder as did Dave Roper on my left, whilst Eddie Green on my right was on the bomb and bread. Eddie had a carp almost straight away and one peg past Steve Chris Fox also had a carp. I managed a 4lb carp myself after about 20 minutes, but with no more signs and Eddie and Chris doing well on the bread I tried this myself, alas I had nothing. I had no liners or signs on the tip and after the first hour Eddie had 4 carp and Chris had 3, Steve and myself 1, Dave was biteless. My match was not a good one after this point, nothing on the tip and nothing on the pole, and I mean nothing. Eddie couldn't get anything else and Dave had two small skimmers on the pole.

As the match wore on Steve and Chris ticked over getting the odd carp on the tip, the anglers to the right of them also seemed to be catching, but to my left it was poor. Then about an hour to go Dave had 2 carp and I had a small 1lb fish. The wind had dropped and all of a sudden the pole was a viable option, I had tried it a number of times during the match without a sign despite feeding maggots their  all day. Steve had a carp on the pole, and I decided to try mine again and there was 30 minutes of the match left and I was plumb last on the lake with 5lb. I dropped in the pole with double maggot and the float went under but I missed the bite, dropped in again and a couple of minutes later I was in. The fish took of and it was a bit of battle, turned out I had hooked a 6lb carp in the pectoral fin, still they all count. Next drop in and the float was only visible for seconds and another carp was on, this prompted a few choices words from others. That carp was landed , but the next one I hooked came off not far from the net. I landed another two carp and lost a fouler and then match ended. Five carp in the last 30 minutes and 2 in the first 4 1/2 hours..

When the scales came down it was apparent that the lake had fished better to my right with Jack Stamp winning our lake on end peg 12 with 95lb, next peg had 81lb, Chris Fox took third n the section with 66lb on peg 8. Eddie had 7 carp for 32lb 12oz and my 7 carp went 34lb 12oz, Dave Roper next to me also had late carp but on the feeder and had 19lb and to his left it was poor. I ended up with just a prize but nothing else, but those last 30 mins were fun and it was nice to get the elastic stretched. Well done to Gary O'Shea winning the match with 167lb off the end peg of the other lake at Whitepost. Nick Ewers was second on this lake with a ton, he moaned like a bitch in the morning cos he couldn't get his car near the lake and wanted to not fish, but he was blocked in had to. PMSL.

Sunday and it was local for me fishing at Bitterwell lake for a charity match in aid of the Bristol Childrens hospital. Paul Isaac who runs the fishery now had 15 booked in but on 8 turned up for some reason. The weather was no great to start and I was hoping to avoid being in the wind. Paul got the draw underway and I pulled out peg 13, but this was not the permanent peg number, I was on 26 I think on the car park bank, with the wind in my face. On the peg to my left was Glenn Bailey and he had nobody to his left until about 10 pegs and so had a large area to draw carp from and I announced him as the winner lol. Glenn in lead chucking mode. 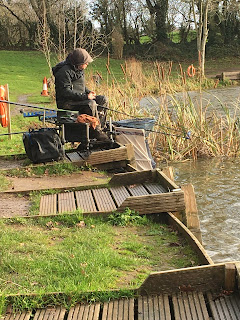 I only got out my two made up lead rods, same as yesterday one with a maggot feeder and one for bread. Only the top two were being paid out and it had to be carp or nothing as far as I was concerned. We started at 10am and I decided to have the first hour on the bread feeding nothing and see what happened on the lake. I had a short cast, nothing, cast a bit further nothing, then a bit further and the tip went round. A decent carp was on and Paul was behind me as I played it carefully back, about 12 metres out it came off, bugger. Not long after this Glenn had one on the bread and Kev Winstone on the road bank had a carp. I never had anything else on the bread so just after the hour mark swapped to the maggot feeder. I had a visit from ex team mate Jack Jones, and on about my third cast on the feeder I hooked a carp and was glad to finally put the net under a 6lb carp. Glenn had seen a carp surface off to his left and cast his bomb and bread to it, good move he had 3 in 3 chucks.

I came off the maggot feeder after an hour and cast the bread out again but this time as far as I could. It was a good move as the tip dropped back and the line went slack, striking and winding I finally caught up with the carp, and this was a lovely condition common touching 7lb. Next cast and a vicious jag that I thought was a liner, and then it jagged again even more and I picked up the rod but nothing. Sadly that was to be my last sign of anything and for the last 90 minutes the lake really shut down.

I was quite happy when the match finished as the temperature had dropped and the wind increases and I was feeling quite cold.

Glenn won the match with 37lb
Kev Winstone had 3 carp for 15lb
I was third with 13lb, and the carp I lost cost me money. 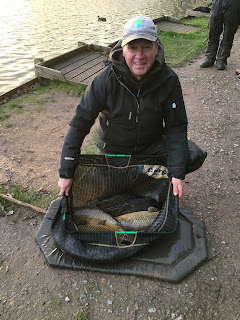 We retired to the village hall for tea and mince pies and the raffle. Sadly I was unlucky and didn't get a prize whilst the lucky Gerry and Mandy Welsh cleared up with three prizes, but fair play as Gerry only had 1 roach in the match and he stuck it out. We then further retired to the ring o bells pub where the money winners kindly spent some of their winnings, cheers lads!

Not a great weekend as far as catching fish, but I did enjoy it and it was a good craic on both days. I am having a rare week day fishing on Wednesday, going to Hillview near Teweksbury, using my last day's holiday of the year. Not expecting to trouble the regulars but I do I hope I can get some F1's on the canal and learn a bit.
Posted by Tim Ford at 20:59