Later this month I am fishing a little team knock up match on Hillview Fishery (Nr Tewekbury) and a few of the chaps taking part said why not go up there for a little practice. I had 1 day of holiday left to use on 2019 and so off to Hillview it would be.

In between going to the gym Monday and Tuesday evening I managed to tie up some rigs and hook lengths for the canals at Hillview. I was OK with what I had done but would have like to have had a few more duplicate rigs. Glenn Bailey picked me up at 7:30 Wednesday morning, nice to be travelling together in the van again. Traffic was always going to be a pain getting out of Bristol but once on the motorway it was fine. It was cold and frosty start but I didn't expect to see the venue with ice on it so that was a bit of a shock. 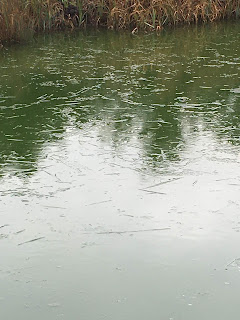 We met up with Martin Rayet, Joe McMahon, Neil Mercer, Dave Wilmott, Louis Townsend and some of their mates, and had one of Keith's breakfasts which does nicely for me. Keith soon got the draw under way and with only 12 of us fishing he put 4 pegs on each of the back 3 canals. I puled out 71 on the third canal, a good area and I know peg 70 is one of the favoured pegs so I was very happy.

On my canal were Louis Townsend on peg 75, Lee Masey on 78 and a local lad called Gerry on 81. My peg was iced over but only just as the pegs to my left were clear. Martyn Rayet walked the far bank to clear his peg of ice and kindly cleared mine too, cheers mate. I didn't take me more than a couple of minutes to break my ice up with my pole cup, and it soon disappeared. 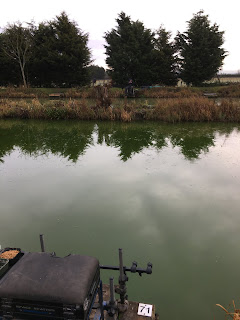 Set up wise I went with just 3 rigs, a 4x10 with 0.11 to 16 PR478 for dobbing, a 4x12 with 0.11 to 18 GPM-B for fishing close to the far bank and near banks, and a 4x14 with same line and hook for fishing in the deepest water. I was unsure whether to feed and fish pellets or maggots, and decided to start dobbing and keep an eye on what was going on. I went out with the bread rig and it took me about 5 minutes to get a bite and net a F1 carp. Trying to get the second fish proved somewhat harder, meanwhile the guy opposite me on peg 94 on canal 4 was getting one a bung. I searched the far bank and finally got another bite and this time a small carp to my left. Another fish came soon after but then no more, I noticed Martin who had started slow was now getting regular fish dobbing. By going even more to my left I got another two fish but again that was my lot in that spot. I couldn't line the fish up whilst opposite they were catching well.

I decided to switch to dobbing maggots and tried in the spots I had caught, I got a couple more carp and did lose a coupler of foulers. I decided that as I wasn't really going anywhere I would feed some maggots across by toss pot and see what happened. In hindsight I should have done this earlier I think but after the ice I was a little negative in my thoughts. I soon started to get bites on double maggot on the 4x12 float fishing about 1/2m off the far bank. I took more F1s now, and also had to put up with some gudgeon and tiny carp and F1, but I was getting regular bites now and this was much better. I tried to work out how best to feed and it seemed 30 maggots every two fish was best, but whenever I caught a small carp it seemed to push the F1 out for a while. I was happy catching here, not bagging but steady.

I was feeding maggots by hand into the deepest water but had not tried here yet, but with about 90 minutes to go I had a mini disaster. The wind had steadily increased and was now very troublesome for me, and striking and missing a bite the rig was blown into the far bank, I lost the float. I put on another 4x12 and went straight back out, but as I went to lay the rig in the wind got it again and balls rig gone again! I took this as a sign, come in closer, and went onto my deep line topset plus two and dropped in with double maggot. Luckily for me the float shot under after a few minutes and I soon netted a lovely F1 and the biggest if the day. This line came up trumps for me for a while, and I caught decent size F1 and some small carp from 1lb to 3lb. With 45 mins to go I realised I had no idea what weight I had (net limit is 75lb) but even though I guessed I had 50lb I thought I would put another net in. I had a few more small carp but then all of a sudden this line went a bit funny on me, and the fish left me it seemed. I caught the odd fantail now and bloody gudgeon. I tried going long down my margin on corn but this never brought me a bite so I sat it out on the deep line and struggled to the end with odd tiny F1.

Neil Mercer behind me on canal 2 admitted to 60lb as did Joe McMahon next to him. I knew I was only hoping to win the £30 for winning the canal, as Martin had slayed the fish all day. The scales started opposite me and the lad who started well on 94 had 76lb, but Martin easily won that canal with 134lb, Glenn had 60lb up the other end which is usually not as good. When the scales got to me the top weight on my canal was Lee with 66lb 8oz on peg 78, I put my small fish on the scales first and they went 22lb, and then with my carp and bigger F1 I weighed a total of 79lb 8oz for the canal win. 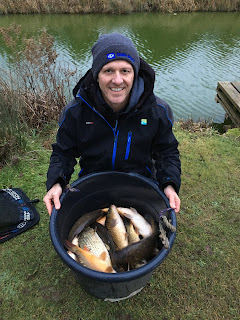 Martin won as expected and not only did he take the winners purse but he then went and pulled out his peg number again to win the golden peg and add and other £100 to his winnings, nice one, don't forget to get the beers in ;-)  Martin caught dobbing for a full 3 hours and then he caught on maggots. Well done mate. 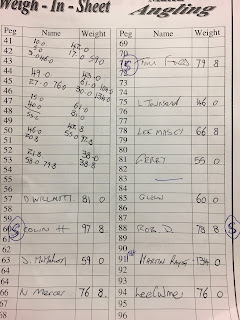 That's a lovely day, and I think I would have had a bit more weight had I switched to feeding earlier, I never tried the pellet today at all but there were plenty of fish caught on that too by other anglers. I have to keep coming here to work out the best way to feed and where to fish in your peg, I'm sure the locals get that sorted quickly. Well that is it for me now until I fish here again on the 29th Dec. In between I will be enjoying Christmas, watching Rovers, and I am also going with my daughter Lucy to see the world darts championship at Alexandra Palace, so it's a busy Christmas and not like last year sat on the beach in the sun!

Happy Christmas to you all, I hope you have a great time, drink and be merry. I hope my blog does bring some interest for people and I do try to pass on what I do during the day, though sometimes the memory is not so good! 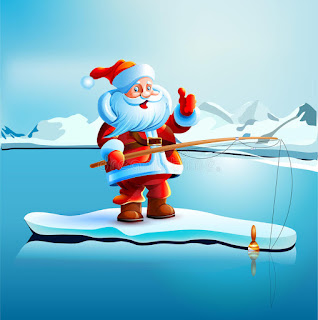