Some time ago Neil Mercer mentioned to me that he was running a friendly team match between Christmas and New Year and would I like to fish, it was a free date and so I was happy to fish.

I travelled back from London on Saturday, I had been up to Alexandra Palace to watch the PDC World Championship with my eldest daughter. It was a cracking night of darts and we had a great view. 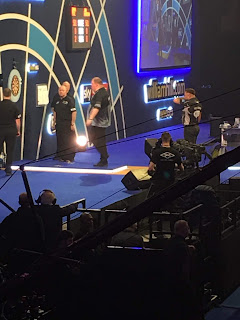 As soon as I was back I got the gear out to put some new elastic in a couple of top sets, and made up some more 4x12 rigs which got trashed last time I was up here. I was well prepared.

Up early for the first time since the holiday and I was all OK as I had not had any pop the night before. I was soon shooting up the M5 and at the fishery in good time to have a breakfast. There were plenty of decent anglers fishing this match and each team consisted of seven anglers. Captains were Craig Edmunds, Martin Rayet, and Tony Rixon. I was in Mr Rayet's team along with Neil Mercer, Dave Willmot, Clint Wojtyla, Martin McMahon and someone called Willow. I paid my pools and soon after the draw was made and I found myself on canal number 2 peg 56, this is the end but one peg on the canal (to the right as you look from the car park) and is the calmer end of the canal with a southerly wind.

As I took my gear out of my car and put it on my trolley I noticed a serious problem... the top drawer in my Preston box was missing, it hadn't fallen out in the car either. It was obviously at home in the shed, shite, all of my hooks, line, plummets etc are in there. Also the new rigs I had made were not in the box as they were on top the drawer I was sure. I spoke to my captain who said he would help me out and he gave me a few rigs, a disgorger, a plummet and a bread punch. As you can imagine I did get a bit of stick for this, only to be expected lol. My sad box.... 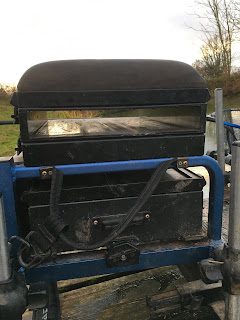 At the peg I had some old (very old) Avon Angling team mates near me, Dave Lewis was on the next peg to me on peg 58, and behind me on the third canal end peg was Tony Rixon. Setting up didn't take long, a dobbing rig with 0.13 to 16 PR478, a 4x12 for fishing 3/4 across and also would do for the margins this side. A 4x14 for down the middle on 0.11 to 18. Just before the match I borrowed some bristle grease from Clint, I didn't want to lose any shot off the rigs as I didn't have any of them either!

The match started at 10am and I shipped out the dobbing rig with bread searching the far bank, within seconds Martin Rayet had a carp further down my canal, and Neil Mercer in the middle of the first canal had one. My rig just wouldn't move and I had no signs of fish, even Tony behind had a few. Dave had nothing and lost a follower, so quiet at our end. Then as I glanced left I spotted about 20 carp swimming just below the surface swimming. I tried swinging the dobbing rig at them but they didn't want to know at first though I did get an F1 out of the blue. The light on the water made it hard to see these carp, and so I stood up and then could see they were cruising around and I watched them move into the near bank about 12m down and then go out again. The far bank was 14.5 to 15m away at the bottom and there was no point going in there at this stage, so I tried the near margin first at 12m and soon enough a few carp appeared and I nailed one. I had another two quite soon after and was feeling a bit happier. In the picture you can probably see the light on the surface hiding the fish from my vision, though Tony behind me could see them. 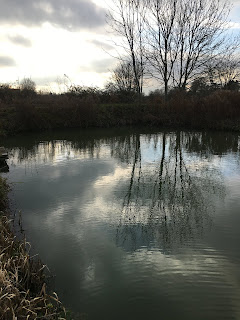 After the first hour I had put about 5 carp in the net, Martin was still slaying them as was Trig and Neil. I took another few carp on bread from 12m line but then they seemed to go and a few rudd turned up. I had a go trying maggot in front of me to rest the carp, I tried on the 3/4 line but it never happened. Back to the dobbing rig and I went back down the edge and took another carp, but then nothing and so went a bit further down which produced a couple more before a bit of a barren spell. Again trying bread across and trying the maggot was a waste of time. I stuck the 14.5m section on and shipped further down the canal, after dropping in a couple of spots with nothing I then hit a sweet spot hooking 5 in 5 drops. It was mostly carp with just a rare F1. Of course the plundering stopped and that spot was now a rudd a chuck. I put the 16m section and went as far as I could and took a few more carp.

With a couple of hours to go Martin appeared to be well ahead on my canal, but nothing much else was being caught. Certainly Trig and Neil were out in front and kept catching. There was £30 for winning the canal and I thought that was out of reach unless I could line up some fish on maggot on the top set plus two and also in the margin. I failed to catch a single fish on these lines though, no F1's in my peg I think and for some reason my canal was fishing tough. I fed a bit of micro pellet on a couple of lines far and near bank long to my left, and these threw up one large F1, and 2 carp and a couple of foulers, but then nothing.

I basically only caught on bread dobbing, and the last 30 minutes were pretty barren. I was amazed at the difference from my last match here when on this canal there were lots of F1's caught on maggots and I also caught well on maggots on the third canal. This time nothing on maggot other than rudd when trying it dobbing.

The weigh in was done in a bit of light, and by the time the scales got to me (I was last to weigh) it was pretty dark and I couldn't get a photo. It was great watching the scales and as Neil did the weigh in there was a lot of banter going on and the match had been fished in good spirits with plenty of laughs. 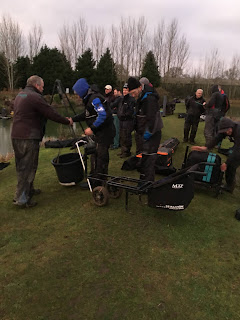 My fish weighed in at 68lb 8oz, and that was top on my canal as I best Martin Rayet whose peg dried up on him in the last two hours and he ended with 65lb. He was well chuffed that I beat him and that I caught on his borrowed rigs lol!

Sheet below with all weights. I can't speak highly enough of this venue, when most people get lots of bites and the average weight over 21 anglers is 50lb a man, that's good winter fishing. When I got home I found the lost drawer and a tray of rigs right where I had put them before forgetting to put them back in the box!

Not sure when I will be back out on the bank as the next two Sunday's are taken up with other events, maybe I could get up here again on a Saturday? 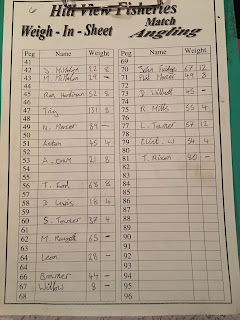