Well the match arrived and we were greeted by a lovely still bright sunny morning, no sign of the squally showers the weatherman was forecasting. Talk was of a good match as the canal was holding a lot of colour and the team thought skimmers would show. Gary O'Shea was our drawbag, but he only had the choice of two pegs, the last being left in the bag for Bathampton. (Apparently the draw was done in order of the teams who had paid their pools to Angling Times first!) The draw didn't look a bad one for us and we thought we had most anglers in the right end of their section. My draw was 2nd peg past the swingbridge which is up past Bathampton bend, a nice walk! The first peg is a flyer, being an end peg and having boats moored opposite, but my peg had produced a 12lb for Vince Lunn about a month ago in a Commercial House, he had caught mainly hand sized skimmers on bread close in. I better mention at this point, to get it out of the way that BATHAMPTON DREW LAST AND CAME LAST !!!!! Bad luck Darren.

I was slightly concerned that there was chopped / sawn wood and lots of sawdust on the ground next to me, and as I was setting up the boat owner returned from shopping. He informed me he was moving off shortly, and started to load up his boat with the wood and all the other bits boaters have, then about 20 mins before the start reversed out of the peg never to return. I wasn't to concerned about this as I felt the fish must be used to the commotion, but I had in effect lost a feature as many many boats are moored on your bankside these days.

Start of the match and in on the bread, a top set plus 2 sections put me just at the bottom of the shelf. I was on my usual 0.6gm Sensas Auchy float, 20 B511 an 0.07mm line. 15 mins in and the float finally went under and a 2oz roach was netted. Another 5 mins and a 4oz roach was netted and then a boat went through. By the end of the first hour I'd managed 7 roach and 1 skimmer for 1.5lb. The bread line was dead and I had already had to refeed it to get a couple of those fish so it was not a great start. Paul Barnfield told me that 4 people had got straight into skimmers but I was level with the other 3 people. OK onto my other lines, I had a quick look on the caster and took a small roach, but then no more, so onto the bloodworm rigs. It was weird, drop in catch a small skimmer first chuck, a couple of small perch / roach then dead, onto the other line and the same. I then could not get a bite, of any of my lines, I looked back on the bread line a few more times but never had another bite. I took a few small perch from the boat on my inside right, but that also died. 2 hours to go and I was reckoned to be last in section. The angler on the first peg had struggled but once he went over to the moored boats with caster hit decent fish. All the tricks I had learned were not working for me, so I put some bread across the canal and hoped for a few fish, I eventually eeked out 7 roach from this line, which was at least a few bites. By now my hands were frozen after the hail and getting bait on the hook was tricky. I sat it out last 45 mins for big fish as I knew I was behind, none came but the odd small perch impaled itself.

I was fearing the worst as the scales arrived, and even though my close friend Glenn Bailey was on the scales I knew I could not expect any favours, not that I wanted them of course! 3lb 13oz was one of my lowest weights on the canal all winter, but a bit more than I thought I had caught. Glenn told me I had beaten 2 anglers who had weighed 3lb 6oz and 3lb 8oz (so the run of bread fish across was crucial) the Bathampton angler had beaten me by 1.5 oz, but the next weight was 6lb 15oz. 10lb odd won the section from 2 pegs to my left, he had caught all hand size skimmers on the bread in close, looked to me as if the fish Vince had caught a month ago had moved, well they have got fins!

I was not happy, but I could also consider myself lucky as I had not lost or broken any sections, though my no3 and no4 section was just saved by grabbing the end as it disappeared out of sight! There was a catalogue of broken and lost sections, Darren Gillman broke his no5 before the match started, and a lad in the next section lost everything up to the no7 section when the wind blew his pole into the boat moored next to him and CRACK!

Back at the results and only myself and Steve Tucker had poor points, with some very good performances. Andy Power stands out again, winning his section from a fair section at the George. We had four section 2nds to back this up and it turned out to be crucial as we tied for 2nd with Diawa Gordon League but beat them on section count back. So we're off to the Nene... um... hooray.... (Surely there's a venue with more fish in it for a big final?) I was happy, but disappointed by my own lack of contribution to the team points effort, still I could console myself that BATHAMPTON HAD COME LAST ON THEIR OWN WATER!

Here's a picture of a happy Thatchers Team! 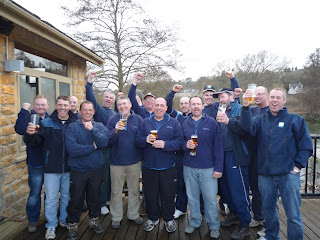 The canal had fished well again with two 20lbs, and 12lb+ needed for 6th. The skimmers had fed but weren't in every peg, my section showed this and you can look a real fool when you don't catch them! Bread certainly catches some decent fish, but caster and bloodworm can too and with the colour groundbait was also working for some. The team plan had worked for most, bread inside then bloodworm/caster across, but there was also a few who had to adapt, Mark Harpers peg was so windy he could not fish further out than 4mtrs, he still managed 2nd in section with 8lb+ but it was a framing peg under normal conditions. All in all it was job well done, oh did I mention BATHAMPTON CAME LAST, ON THEIR OWN WATER! After the match there was no sign of Bathampton captain Kev dicks, but Lee Trivett and Shaun Townsend stayed in the bar and took all the stick with good nature, fair play to you two.

Here are the full results, thanks to Vinny for this. Vinny is the son of Nicky Lunn who is married to that fat bloke Mike Goodhind. (Told you I'd put you in my blog Mike!)

A big thanks to the organisers (Vinny and Andy Britt) and to all the hardy section stewards who stayed on the towpath in terrible conditions. However, it should be noted that a number of them absconded to the George pub to "warm their hands", Dave Haines and Richard Lacey both were rather merry after the match!
Posted by Tim Ford at 19:36