It was a drag getting up Sunday morning after losing an hour for the clocks going forward, but the Sun was shining and I was off to Cider Farm Lakes for my first visit in a year. Cider Farm had some problems last year, but give fishery owner Mark Gibson his due he has worked hard and seems to have put the problems behind him. He has also listened to some anglers ideas (moans really) as you've now got an hour and a half to set up and the match itself is 6 hours long.

I was grateful to Paul Haines for giving me a lift, the last time I travelled with Paul I gave him a lift to Fishponds House many years ago. I was a bit of an aggressive driver back then and Paul was trying to find somebody to give him a lift home because he didn't feel very safe as my passenger! I've since been on a defensive driving course and looking back realise I was lucky not to have had a serious accident when I was younger.

For the match today we were on Yarlington lake, a sort of snake venue with lots of twists turns, gaps and islands. This design has tended to make some pegs much better than others, but generally even if you are not on the best pegs you can usually catch a few. Paul drew 25 which put him on a gap and the reeds on either side of the gap were alive with fish, I thought he had a chance. I had drawn 58, but wasn't to chuffed with this as I have drawn this peg before and been off the pace. Talking to many anglers it seemed most fish had been caught from the bottom of the shelf, but I thought the fish would also be up the shelf as the sun warmed the water. I set up rigs for both up and down the shelf and the inside line, I used 0.14 as hooklength to 0.16 main line throughout, except on paste rigs I used 0.16 straight thru. The angler to my right on peg 2 told me he had won the last 3 club matches he had fished on this lake with paste, with 75lb being his best weight. Although he wasn't on a gap he had 5ft of water within 6inches of the far bank reeds, I had to come about 4ft away to get to the bottom of the shelf. I fed here at the start, on top the shelf and 5mtrs to my right down the inside.

I had a 3lb carp first chuck on the deep line and a small carp next chuck, then no bites! I went across and had no bites, and none down the inside, back to the deep line and then I had a couple more. After an hour I had 5 fish, the lad to my right had 14 on his paste and was hammering me! During the next two hours I managed to pick off the odd fish from the deep line and the inside, but it was very slow, and I could see the angler on peg 14 bagging! The lad to my right had stopped catching and went for a walk, despite having about 30lb in his net, the sun was very bright now and I was now getting no bites at all. The sun had gone over far enough that I had a bit of shade across, so I plumbed this area and fed a bit of pellet and sweetcorn. I was going to fish sweetcorn because there was no real shelf here and using this bait would sink the bristle of my 4x10 float if I was not in the right place. After 10 mins I tried this spot, and when I put the rig in two fish spooked and swirled! The next two hours I took fish steadily, it wasn't manic but steady and I was clawing myself back. With 30 mins to go this area had died, despite me resting it a couple of times by catching the odd fish down the inside, and the other far bank line never produced a bite. So I stayed on the inside with paste and took 2 more fish in the last 10 mins for about 4lb, they were handy!

I weighed 48lb 1oz, and was informed this was good enough for a section win... by double default! 1st and 2nd overall had come from my section (miles away though!) on pegs 49 and 46 respectively. The lad to my right weighed 38lb, let that be a lesson to you! I never really felt I had a lot of fish in front of me, and most of the top weights came from the other end of the fishery, I think I came 7th in the end.

Brian Slipper (pictured below) won by catching all bar 4 fish down the inside to right and left, while the angler 2nd had caught all his fish on top the far shelf. 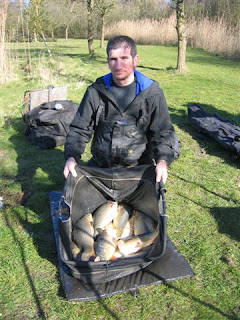 Poor old Paul had only caught 5 carp, and was convinced the carp were around the other side of the gap, the weights from that side would seem to reflect that. But overall the average weight per angler was 46lb, and most people had a days fishing.

A nice bottle of Dabinett Cider in the sun finished off a great day, and I'll think I'll be back again to visit Cider Farm if the fishing continues as it is.
Posted by Tim Ford at 19:36