Well my first river match of this season came round quicker than I expected. I couldn't get on any commercial fishery matches, or at least any that I fancied, and so I sneaked in on this Frys match. Now Frys can be a tough nut to crack, but believe me it is full of fish and there are loads of bream. However, I decided to get myself prepared for it like I always did in years gone by... I went out the night before and had 6 pints of cider. I was a little woozy when I heard the alarm for some reason! Maybe that was the reason I didn't stack the car right and my box went over as I went round a corner, look at this mess, 1 drawer completely empty! 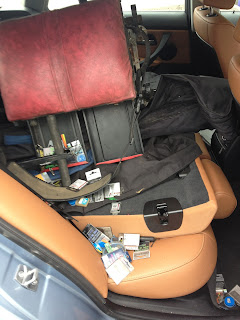 It was good to see some old faces again, anglers like Warren Bates, Dean Harvey, Derek Coles to name just a few! After a breakfast in the Crown pub it was on to the car park at Frys for the draw. I didn't actually draw a peg I was handed one, quite funny really, but all above board! When I opened it up there was no number on it, it simply said "Culvert". Well I knew where that peg was, about 2 fields away and a place where bream live.

I got to the peg after a nice walk down across one pristine field, and one that was full of 3ft grass. My downstream neighbour was venue expert Derek Coles, and above me was another bream head Dean Harvey. As I was setting up I saw a bream roll, nice, and so the groundbait feeder was set up first a nice big open ender, a 14 B611 to 0.128 exceed. I also set up a crowquill with 0.11 exceed to 20 B611 and that was it. I had a nice well cut out peg to fish, and my box was about 3ft off the water with reeds in front and nettles behind, casting would be tricky, see piccy (can you spot my box?). 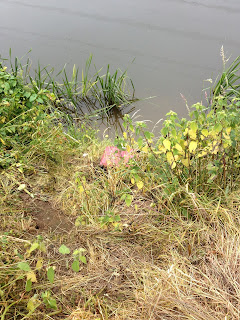 I started the match on the feeder putting in plenty of casters in the feeder plugging it off with Sonubaits F1 and brown crumb. After 15 mins I had a small chublet, and next chuck a proper bite and a 2 1/2lb bream was netted. Thirty mins later I hadn't had another bite but then the tip did another merry dance and I landed another bream of the same size. Things went quiet then and I changed my hook bait from red maggots to worm, that brought a couple of perch, oh dear usually a bad sign. An hour and a half later I was about to pick the float rod up when I had a slammer of a bite, the tip flew over and stayed there. Bream number 3 was landed and this one was bigger, over 4lb. If you look at the picture below you can see the culvert opposite me, and I was casting downstream of this, but well across. You will also notice that the river was flat calm, this was before the match, during the match it just got windier and windier, so bad I had to put the rod down to the water to see any of the rare bites! 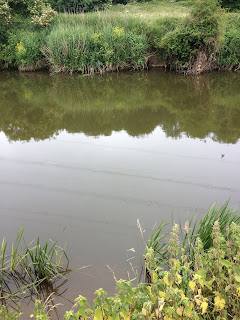 At this point the sun came through and the fishing would get harder, I tried the crowquill a couple of times, just to rest the feeder, but it was a waste of time as the wind wouldn't let it go through properly. So I took it off and set up a 3AAA waggler with 5 no8 shot down the line. Even this was hard work in the wind but I did catch the odd small roach, dace and perch on it and I enjoy fishing a wag so it was real fun to do it. Of course these small fish weren't going to do me any good in the match so I had to get back on the feeder. It seemed that the bream had gone off the feed though, and Derek came up and told me he had 3 bream but no bites for ages. I persevered and then a good bite and a good fish, but bugger I pulled out of it in close, at least it was out of the shoal. Next chuck and the tip went round again and another 4lb+ fish on the worm. I thought maybe they were on the feed but alas all went quiet again, and so I had another spell on the wag and then with 20 mins to go chucked the tip out again. Five minutes left and lovely drop back and bream on, in the net, end of match!

Derek came up and said he had no more, but had lost 2 bream (one snapped him), and so I thought I must have beat him, Dean had 4lb of roach above me and came down with the scales. I went first and weighed 20 12oz and Derek's 3 bream and 2 perch went 18lb 6oz, I reckon two of his bream were well over 6lb! I'd done enough to win the match as the other end of the river had not fished well with 5lb being top, but those anglers could drive to the river bank and didn't have a long walk. I'll take the long walk and some fish thanks! Here for a change is a piccy of my fish.. 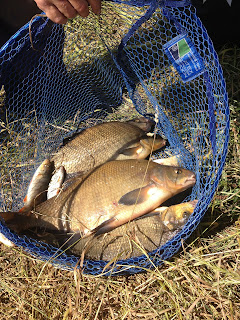 So what about the lovers of commercials? Well I hear Mike Nicholls had a torrid time at Viaduct and even went for a swim, looking forward to reading his blog lol! My usual travelling partner Glenn Bailey went down to Summerhayes drew a flyer and came 2nd his favourite position on his favourite bait, paste! Happy days!
Posted by Tim Ford at 20:22