I was really looking forward to this match as it meant I was going to be on a few days holiday down at Viaduct. The day didn't start well though when I got stuck behind every truck, tractor, red light and I only arrived at 10am after setting off from home at 8:20am! However, nothing was going to dampen my spirits as I was going to be pitching up in one of the fabulous lodges with Mike Nicholls, Glenn Bailey Martyn Woody Woodington and Mark Tanner. Those guys had been down since Saturday and were clearly enjoying the fishing, weather and cider. I was obviously one of the last draw but was not unhappy with peg 119, though I hoped the fish would not be hugging the top bank.

Getting to the the peg I found I had Jason Radford on 118 and Dan White on 121, across from me was Mark Tanner on 123 and Matty Toomes on 124 who I had double or quits with on my £1 winnings! Setting up was a nice and easy affair, with a paste rig for the long line, a 4x12 PB4 for hair rigged pellet with 0.16 to 16 PR36 for the long line, and a margin rig which was a 4x10 Durafloat with 0.18 to 14 PR36. On the whistle I cupped in some 6mm pellets in front at 5m, a big pot of meat down my right hand margin and that was it. I was into a fish on my first drop in at 5m on the pellet rig with a 6mm pellet,and a 5lb carp was landed. I lost another and then it went quiet, but by the end of the first hour I had 5 carp so a good start. I took another 2 carp in the 2nd hour on paste but now things went tits up and all signs and bites stopped. An early look in the margin gave me just an odd roach, meanwhile Jason was getting a carp a chuck in his margin back toward 117, though he was losing a lot of them.

I spent a sad third hour watching other people catching, I think I managed a skimmer out at 5m and that was it. I did have to get off my box at one point because Jason knocked his no4 and no5 sections in whilst playing a carp. I rescued them for him knowing that he would carry on bagging and kick my butt, but I would never try to get an unfair advantage and spoil another person day, and Jason was always helping me carry my kit when I was ill so I owed him a favour.

Hour 4 improved ever so slightly with a couple of carp another skimmer and a tench, but the margin was still full of bits whilst Jason was still catching and Dan on 121 had taken plenty of tench and some carp from their margins. I was confused as I had by now fed nearly 6 pots of meat into the margin but small fish were grabbing the meat on the way down. I reckoned I needed a heavier float to get the bait down, but before I changed floats I stuck an 8mm pellet on the rig and tried that. It sat there for a few minutes nudging about and I was just about to give up on it when it shot under and I landed a carp. I now started to feed pellets into the margin and gradually I started to get the fish going. The last hour was great and Jason was moaning at me to slow down, it did a little but it was never going to get me in the frame anyway. I weighed 116lb in total which had 10lb of silvers in it. I was a chip shop sausage as Jason weighed 140lb+ and Dan 135lb (including top silvers). The match was won by fellow lodger Glenn Bailey with 174lb on paste from peg 112, beating Tony Rixon on peg 135 who had 164lb. 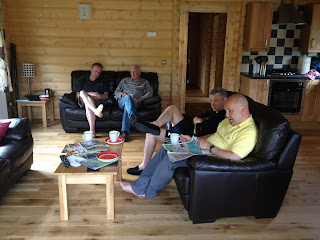 We returned to the lodge drank a couple of ciders, showered, drank cider, ate curry, and drank more cider.
Posted by Tim Ford at 16:38