Fathers Day and the opening day of the season usually mean nothing, I tend to stick to a commercial fishery. However, this year I decided to have a lie in actually see the kids on the morning and then have a few hours on the river. It nearly all went wrong when I ran out of time to get any bait, but Warren Bates came to my rescue and I collected some bait from him. It was only on Saturday night that I realised I didn't have a day ticket for the river!

Waking up on Sunday I decided that a trip to Bath Town should be OK for a few fish, although Chris Ollis warned me on Facebook that there were a lot of railings up now. Unfortunately Chris was correct, and even though I found a gap when I surveyed the scene I was not impressed, look at the piccy! 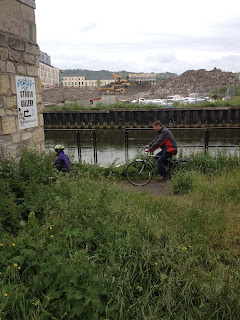 I got back in my car and drove down to Herman Miller, there was one guy fishing here on a groundbait feeder and after 5 hours all he had was 1 perch, back in the car again! I ended up at Rotork (I believe this is still free fishing) and parked down by Dukes and walked down the river until I came across this peg which looked much more pleasing on the eye! 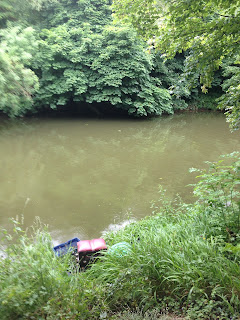 I think this was about peg 22, couldn't see a number, but it was quite fishable although I was about 6ft off the water. To be honest I wasn't expecting to hit the heights today, but just to run a float through and get it to go under a few times would do me, though it was a shame it was raining! I settled on a pole approach as the river didn't have much flow, and picked out my trusty 1grm pencil rig with an 18 B511 to 0.1 attached. Nothing more was set up as I wasn't packing much in the way of bait. I did have plenty of gbait though, and so I threw in 14 balls containing about 1pt of hemp and 1/2pt of caster. I picked up the rig, impaled a single red maggot and carefully lowered in the rig......... the float went under and I swang in a roach, heaven was back! Ummmm nope, no bites then for 15 minutes, lol! I tried an old trick which has worked a few times for me and ran the rig way downstream where the balls had gone in, this worked and started catching small roach. After about 20 minutes the bites stopped and this was the signal to go back over the gbait and hey presto bites over it!

The fish I was catching were small, 2oz mostly and the roach disappeared to be replaced by big bleak with fat bellies! The bleak were not shallow, but then I had not loosefed as I knew bleak could be a pain here, they were about 6" off bottom and I was happy to catch them . In between I took a few perch to 4oz, a couple of tiny chublets and a dace. I threw another 8 balls in after 2 1/2 hours and I thought I had killed it, but after 10 mins the bleak were back, though I did catch my best roach of the day at around 6oz.

I did try going over depth with a worm and double baits (not easy on a pencil float but with the lack of flow OK) for a time but 2 perch were all I had to show and there was no sign of skimmers, not that I expected any. I wrapped in after 3 1/2 hours fishing having had an enjoyable time, and whilst not a great day it was just nice to be back on a bit of flowing water and I have had a lot worse opening days! The early weeks of the season in my experience have never been great, unless you land on a load of bream, and I tend to wait until end July if I can. Last piccy today is of the fish in my net, I guessed at 8lb, not a great piccy as everything was wet and slippery by now! 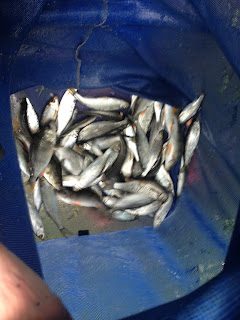 I'm off to Viaduct on Wednesday to spend a few days down there in the lodge with Mike Nicholls, Glenn Bailey, Martyn Woodington and Mark Tanner. They are already down there, but apparently Mark has broken a no4 and no7 section of pole already, lol!
Posted by Tim Ford at 20:42