It was rather tricky leaving home today as it was my eldest daughters 17th birthday, but I did stay around long enough to see her opening her cards and pressies. The weather was looking good and the sun cream was in the box now all I needed was a few fish. After a good brekkie at Shipham cafe it was onto the venue in the Bailey mobile. At the venue Matty Toomes was running a book and you could bet on yourself or anyone else, Matty had me down at 8/1 so I put a few quid on myself,quite a few people had a bet on Craig Edmunds. Actually maybe I have been spelling Matty's name wrong on my blog, here's a photo of him with his "winners" T shirt, lol! 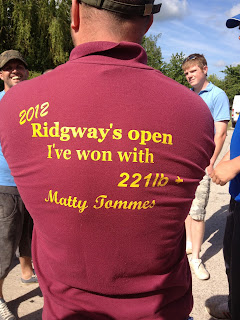 I managed to get myself about halfway up the draw queue today and seemed there were good and bad pegs left in the hat. I wanted to avoid drawing 8 and 10 on match lake, and at least I couldn't draw peg 7 again as it wasn't in, but I didn't get too far away drawing peg. Glenn drew peg 19 and was very happy with that. Getting to my section I had Tom Thick on 1, Clint Wojtila on 3, Neil Mercer on 5 and Johnny Baker on 8. Pegs 1 and 5 are usually the boss pegs and so I was already thinking I would need a good match. I had the point of the island to fish to and could clearly see Glenn and also Gord Cannings on 18 opposite me. 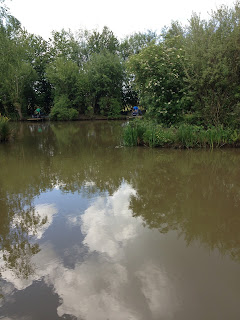 The one thing that was very evident whilst setting up was the amount of fish moving on the end of Neil's island, whilst mine was very quiet. I set a rig up for meat at 5m and it did for the pallet on peg 7 a 6x10 pencil with 0.16 to 14 PR478, a rig for pellet shallow across, and a depth rig 4x10 durafloat 10 for across with 0.16 to 18 PR36, and a stalking / slapping rig. However, I started the match at 10 mtr on a 4x12 Inter float with 0.14 to 18 PR36 with banded 6mm. I had fed all my lines and was feeding 6mms by catty to the far bank. By this stage Tom Thick had caught 2 carp and Neil had lost 3 foulers. After 30 mins I had pulled out of a skimmer, Neil had 2 carp, John Baker had 3 and Tom Thick had 6. I was forced across earlier than I wanted to, and my reward was a carp in the tail!

90 mins in and I had a look on the meat as I only had 1 carp in the net, I took a quick carp, and then 2 skimmers before this died. After 2 hours I was now a country mile behind everyone!!! Neil had lost more than he caught and Tom was still slaying carp by mugging (he said after there were nearly a hundred in his peg on the surface). Glen had a good start but his peg had died, and as John Baker had caught a few on meat I decided on a change. I fed a pot of meat across where I had been feeding pellet with the catty, and using the durafloat rig pulled the band through an 8mm cube of meat. This worked in that I did catch a couple of carp, but bites were few and far between with hardly any liners. I fed it carefully with a kinder pot of meat every chuck, and if it went really quiet I fed a bigger pot then tried my other lines for 10 mins. Trouble was I couldn't get a bite elsewhere. I did mange to mug one fish, but it did me under the pallet (I didn't pull very hard cos 10 mins before Neil had the same and snapped his top kit in 3!!) I had a 2 1/2lb ide from my 5m line but that was it, and the margin never produced a bite. I clawed my way back into the match but then John and Neil both caught some better fish in close on meat. The far bank had slowed badly and so I dumped in a big pot of meat and pellet and this gave me a few more fish in the last hour, but it was not going to be enough.

The scales showed that Tom won the match from peg 1 with 189lb, Clint had 30lb of silvers (I guess he won the silvers), Neil 98lb (and he lost about that amount too!), myself 69lb 5oz and Johnny Baker 69lb 13oz. So that was that beat both sides and I had to pay them both a £1! John did very well from peg 8, he caught 4 carp and a tench at the start without feeding anything and ultimately I never quite caught that back up. My league is now over after 2 poor results which is a gutter,but I am still in the knockout after getting past Jason Radford who was up on lake 3 which fished poorly. I'll have to try to pull my finger out in the remaining 4 matches to try to progress in the knockout, frame or at least win a section. I didn't stay for the results as I wanted to get home to see my girl, Glenn didn't need convincing either after a tricky day when he had 64lb but on 21 Bob Gullick had 145lb. Oh well such is life!
Posted by Tim Ford at 21:20