This was to be my last visit to a commercial fishery for a while as the winter leagues will now begin in Ernest. This time Glenn drove me to the venue and we wondered if his heavy pellet feed and paste approach would still work since the temperatures have dropped, although I sat all day in my t-shirt as it was warm. We took a quick walk around the lake and the pegs from 31 to the end seemed heaving with carp. Just before the draw Tony wound up Glenn by saying there was a 2 pint bait limit, but Glenn smiled and didn't take the bait! I came out of the draw bag with peg 23, which gave me plenty of room but was at the opposite end to where I thought the fish were. Chris Fox drew 19 and thought the same (and he draws crap), Rich Lacey was on 20 (he draws crap), and my neighbour on my left was once again Clive Feddery (when he draws next to me it's crap, lol!). This is the view from my peg with Scott Puddy, Trigger (stripped) and Clayton Hudson in the distance. 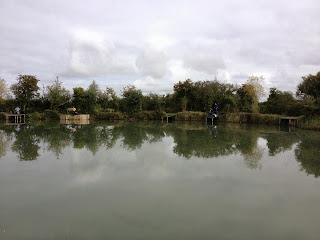 Trig with, as he said "his guns out", he must be using the same weights that I do then, lol! 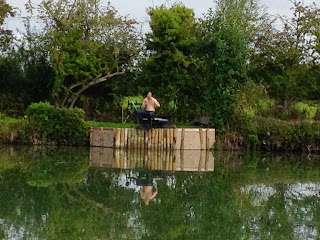 I set up 4 rigs today; a 4x16 Preston Yellow with 0.16 to 16PR36 for banded pellet, a paste rig, a shallow rig and a 4x10 Durafloat 10 with 0.18 to 12 PR478 for the margin to my right. To start the match I fed a big pot of hemp and corn in the margin, a big pot of 4mm pellet at 6m, and some 8mm pellets at 13m. I started shallow at 13m but never had a bite in 10 mins but then spotted the 6m line fizzing and I dropped in on the paste and had a 4lb carp first drop. By the end of the hour I had 4 carp for 16lb. I then struggled on this line and I never caught another fish here all day. Going back out to 13m I tried both deep and shallow pellet rigs but in the next 2 hours all I had was a skimmer and a tench. Trig and Clayton had both started well but now began to struggle, but Chris Fox was struggling, Rich Lacey had 1 carp, Clive had a skimmer and a carp so it was not good.

I started toss potting in 8mm pellets as well as loose feeding a few at 13m and for a while this worked as I took 3 carp, but then all to soon the bites ended and a long wait ended in a fouler. I had various trips into my margin but despite all my heavy feeding all I could get on double corn was roach, I think I should have fed 8mm pellet here, you live and learn. Chris Fox who had lost a couple of skimmers then had a carp snag him in the margin reeds and his elastic snapped, as did Chris's temper and he packed up! Clayton then fed right next to the reeds where Chris had been, which really he should not have done as he went past the pallet between them, and despite being told of this he carried on and caught some carp. In the last hour I sneaked out 2 carp on paste at 13m, but pulled out of one and another snagged me 4m out!!! Clive had 3 big carp in the margin on corn to end his match well, but he chucked back as his mum wasn't well, hope she gets better.

When the whistle went I knew that my recent consistent poor form on lakes had continued, I got off my box to pack up and trod on a top set, crack! I weighed in and had a level 47lb which was beaten for the section default by Clayton who had 62lb. None of my neighbours weighed in and I just can't get that little bit of luck right now and make the right decisions to get those few extra fish, never mind I never broke my pole like Gordon Cannings, or Scott Puddy.... ummm hang on I did! The prize for best pole action went to Ken Rayner who let his butt sections slip into the lake after the match, but fair play he stripped off dived under and retrieved them! Here he is getting back out after a good bit of swimming. 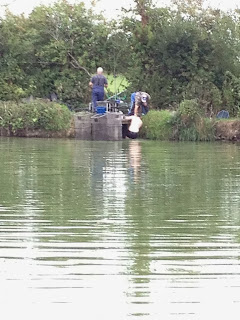 The winner on the day was Paul Elms with 103lb, and next to him was Shaun Townsend who came 2nd with 93lb, they were on the top bank at the other end of the lake. Trig did well to get 88lb, and Mr consistent Tony Rixon was 4th with 81lb, and he bashed up Glenn as the paste failed to work well, but he still had 63lb. Top silvers went to the swimmer Ken Rayner with 13lb.

Next week I'm on the upper Avon at Chippenham / Christian Malford, absolutely no idea what it will be like, but I know we could do with rain!
Posted by Tim Ford at 21:44