HOORAY, the river winter leagues are back!

Back to today and as ever I really enjoy seeing lots of familiar faces, and some from many years past, people who still enjoy fishing moving water, it was impossible to catch up with everyone as there are 13 teams of 6 fishing this year. Mark Harper had slightly changed the teams around this year, putting himself and Andy Ottoway into the winning A team from last year, which was myself, Martin Barrett, Gary O'Shea and Lee Trivett (though today Neil Richards from Swindon stood in for Lee). Mark decided I had to do the team draw, which doesn't usually give me a good peg but the team generally does well. I really wanted a peg at Swineford or Jackies, or in the shallow water up the Crane, but I pulled out peg E12 for myself. I thought I was on the gantry up the Crane and was really gutted, but I wasn't that was Mr Barrett's home. I was one peg up from the bottom of the lane, last year on this match I was on the next peg below, but this time it was not flooded!

The river is very low at the moment with very little flow, but due to the warm weather there is some "colour" in it from what I guess is algae / suspended solids. My peg was about 12 foot deep, which is shallower than the 4 pegs upstream of me, and shallowed up to the peg below. There were fish topping and I was hopeful of a few roach, due to low overhanging branches I couldn't fish anything other than a pole, and even then would have to net everything, it was a right parrot cage! Glen Calvert who was on the end peg lent me his weed cutter and I lopped of the lily pad heads so I could bring any fish within range of my landing net! On the peg above Mike Goodhind was fishing off a wooden platform and could fish unrestricted. Here's my peg today... 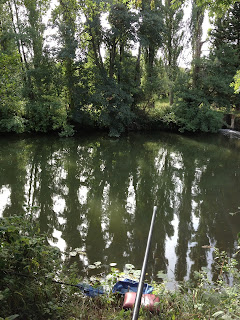 I set up 3 pole rigs today, a 1grm pencil rig with a 18 B611 to 0.10, a 2grm PB silvers with same hook etc, a chopped worm rig (never used). I did run the line through the rings of my feeder rod, but only attached a swivel as I couldn't see me using it unless I was in shit street. I was ready about 1 minute before the start, and on the whistle I threw in 13 balls of groundbait at 13m laced with hemp and caster. I started on the 1grm rig and had a few roach straight away on  caster, but soon small bleak started to hold up the bait and so I picked up the 2grm rig. If I'm honest the first hour wasn't great for me, I might have had 2lb, but I had not got into any rhythm, whilst Glen below had caught well.

Just after the hour mark things picked up and I started to catch 3 to 4oz roach most casts, I was chopping and changing rigs and depths to try and keep putting fish in the net and I found a depth about 1 foot off bottom was best. The second and third hour were by far my best, and I also added a couple of 8oz roach, other than a tiny perch and 1 dace it was roach all the way. I had been loose feeding hemp and tares and tried these on the hook on and off, I never did have a fish on a tare, but did manage a few on hemp. During the 4th hour the peg went very iffy, I couldn't get a bite on caster and bites on hemp were very tentative and I felt I just wasn't getting the presentation right with a strong upstream wind literally stopping the rig. I was convinced the roach had switched onto the hemp and kept trying it with little reward.

Eventually with an hour to go I decided to reball the peg in the hope of getting a few back on the caster. I took 4 reasonable roach in as many chucks but then it was dead and I could only catch really small roach on maggot. I didn't want to end the match like this so I went back in on the 2grm rig and on the deck with double maggot, I got a couple of 2oz roach on this when with 15 minutes to go I hooked what I thought was an eel, but then the fish became a dead weight and my no5 elastic would not lift the fish off the bottom. Conscious of the lilly pads and cabbages I played the fish out long until gradually the fish came up in the water and there was a 3lb+ bream. Gingerly I played it in and thankfully got it into the landing net at the first attempt, what a bonus. A couple more roach came my way before the whistle went.

From the bankside banter I was fairly confident of winning the section, as Glenn Bailey up on peg 1 in my section had told me 4lb was a good weight up above the cattle grid (Glenn himself had a tough day with cows eating a rod, and pike eating his fish). When the scales did get to me Roy Carter was winning with 6lb 6oz thanks to a 4th chuck bream, Mike Goodhind managed 2lb 3oz for last in section and I plonked 17lb 1oz on the scales. Glen Calvert came 2nd in the section with 7lb 12oz and said we should have a £1 next time! It turned out the Crane fished really hard and I was surprised to find out I was the top weight up here with nobody else breaking 10lb. However, the rest of the river was amazing, there were lots of double figure weights of small fish and 8lb was an average weight!

Winning on the day was Graham (lying c*nt) Hunt with 27lb from the top peg at Jack Whites on the stick float. Graham admitted to 12lb after the match, and said he was embarrassed by his awful estimate! Graham has had a bad season so far and was due a good un, so I was really pleased for him.

Winning on the day was the Mark Harper picked Thatchers A team, we only dropped 3 points on the day. I think Frys might have won the B div, but it was a bit hard to tell as Mike Goodhind made a right balls up of reading out the results, lol! So a good start to the league, and the next round, which is a few weeks away, will pit me in the knockout against team mate Martin Barrett.