Round 2 of this league and I had to drive to Melksham for the draw, the breakfast in Spencers club was not great but I was hungry. The talk was if we could actually find the sections pegged and what state would the river be in, luckily Vic Abbot had written some great instructions with sat nav post codes included. Mark Harper did the team draw today and I found myself pegged in D section at Chippenham somewhere by the sea cadets I was told. I jumped in my car and followed Thatchers B team angler Nathaniel Johnson which was a good job as I don't think I would have remembered! Thatchers A were next to B, so it would be a good day for banter.

Finally arriving at my peg I found myself pegged above the sea cadets launch, right opposite some metal pilings, it certainly wouldn't have been my pick of pegs but being on a bend it would have some flow which would be handy. My neighbours were upstream about 20 yds Derek Coles, downstream about 150 yds Nathaniel. A picture of what I was to face for 5 hours is below:- 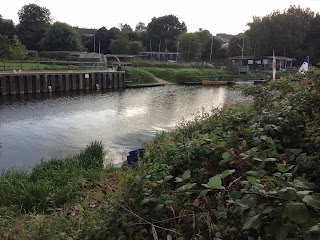 Before the start I got some info from Robbie Kepner that my peg was good for chub and I shouldn't bother fishing for roach. Hmmm, being a team match I needed to consider all my options, didn't I? I set up a 2.5AA waggler with 0.15 to a 15B711, a maggot feeder with the same gear, and a 1grm round bodied pole float for 13m with 0.15 to 13B711 for chopped worm. No roach then, lol! To be fair I couldn't see me catching many roach, a fierce down stream wind, gin clear river and the sun coming out all said to me "STRUGGLE".

I started the match on the waggler loose feeding maggots, and almost instantly the down stream wind got up worse, I was fishing well down the peg due to the wind. It was a slow start for me, after the first hour I had 3 perch, 1 chublet and 1 roach for about a 1lb, Derek was no better. I considered changing line strength, but my peg was shallow and weedy in close and I couldn't see how I could land a chub on lighter line. However, 30 mins later  and I was on 0.12 and a 20, and it didn't make a lot of difference, at least to start. Two hours in and about 2lb in the net I fed some worm and caster at 13m, gave it 15 mins then dropped in with a dendra. I took 4 perch from 4 to 6oz quite quickly then no more bites so fed a bit more.

I kept trying the waggler at differing depths and eventually sat it out fishing full depth (9ft) with just 1 no8 and 3 no10 down the line. It was hard going, and the wind was really bad and with the sun out there were areas of the peg where I could not see the float, but when I did get a bite it was usually a 4oz perch, although in the last two hours a few roach up to 6oz appeared. My second look on the chopped worm was very slow to start, and I was just about to give it up when a 3oz perch kept my interest. Another small perch then preceded three perch of around 8oz each which were very welcome. This line died off bar one more small perch, and I spent the last hour on the wag during which I snared a few more fish including a 12oz chub, and a last cast roach.

With the match finished I reckoned I had 7lb which considering the conditions I was really chuffed about. The only person admitting to more was Nicky Johns a few pegs upstream. When the scales arrived Nathaniel was top with 7lb 4oz, but he got his lesson when I weighed 9lb 11oz. Derek had just shy of 5lb and Nicky Johns did indeed win the section with 11lb 10oz. Nicky had about 50 small roach and some big perch on wag and pole fishing a 22 to 0.06 bottom!! He lost some perch in the weed he said, but I wasn't surprised, you wouldn't catch me fishing 0.06 on the river, but fair play to him. Perhaps I should have gone lighter myself? I ended up 2nd in the section so team job done. Here is Nicky's catch. 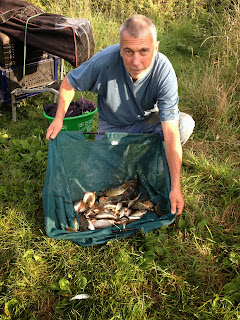 Another long drive to the results, but they did do a nice cheese and onion roll, and it soon became clear Thatchers A and B next peg battle was going to be close, and we'd also drawn some good pegs. In the end the A team beat the B team by a point (let that be a lesson) and we ended first and second on the day. On the individual front it went something like this...

I was 8th but got the section money by default, which was nice, and got through the knockout by displacing Martin Barrett. Next round I have Rich Lacey to battle with!

Next week it's the first round of the ATWL at Swineford,Crane, etc, sadly on 5 teams this year, hopefully plenty of good pegs in then!
Posted by Tim Ford at 21:14