No fishing this weekend, I spent Saturday in Cardiff watching the cricket and pleased to see an English win. That was followed up by hearing today that the England fishing team had won the World Champs, well done to the lads, and especially to our local ace Des Shipp.

September 1994 started off fairly quiet for me with a a couple of pleasure fishing sessions, firstly 12lb up the crane fishing hemp on the stick for roach, and mag on the wag for a couple of a chub. At Newbridge on the 10th September I had the pleasure of fishing with Andy Floyd and the late Rod Hill. I struggled on the wag and sat behind Rod for a while watching him catching chub on the waggler of peg 77.

Thursday 29th September was the first of three days practice on the river Trent for the Div 2 National. I travelled up with Kev Boltz and we were to meet the lads at Hoveringham, but after walking about 3 fields we thought the lads must have gone elsewhere and fished where we stopped. We both set up maggot feeders for the very long chuck to the far bank looking for chub, which was the tactic here. However, after 90 mins we were concerned we would run out of feeders as our pegs were snag pits. Out of desperation we both switched to the waggler but more out of hope, but this was a good move as we started getting odd bites from roach. The fish we caught were all 6oz to 10oz, not many bites but worth catching, and we fished very light with a 24 to 0.08. I ended with 7lb, Kev had nearer 9lb, and as we packed up the lads came down, they had been another 3 fields up and had some chub on the feeder, with top weight being 21lb.  The following day we went to Holme, mostly to fish the float for roach etc. I got in on peg 126 and upstream of me was Andy Floyd. I really liked the look of the river here, and an angler some pegs below was catching roach, I set up a 6 no4 stick float starting with the 24 to 0.08 gear. I fed maggots by hand quite generously, while Andy above me fed caster and hemp to see how each bait worked. I started to get the odd bite, but it was hard work, and occasionally I struck and reeled in to find no hooklength! I went up to 0.10 and still got bites from roach, perch and chub, my fish were all netters it seemed. I then hooked a fish which snapped me up near Newark, a barbel I guessed! I stepped up to a 20 with 1.5lb maxima and the bites were harder to come by, but then I hooked another barbel and was locked in battle for 20 mins. Eventually I landed a lovely 8lb barbel, my biggest ever. At the end of the practice I weighed in total 19lb and had fed nearly 3 pints of maggots. Andy had 14lb of all roach. The last practice was an open match, and this was a non event for me as I drew above Shelford weir and managed 2 roach on the stick float. It was a bad area and I hoped I draw better in the National.

On the day of the National itself the usual hangovers, nervousness and excitement abounded, and I dreamed about winning the match and taking £6K off Billy Knott... well we can dream can't we! The team draw done I was at Hamms Bridge and the lad helping us out said to me "just try to catch something!", oh dear. When I got to my peg it didn't look great, the river was boily to about 20 mtrs and the lad next to me was a local and said it was full of snags. He was right and I lost 2 hook lengths plumbing up the stick and it never got used. It was a day on the feeder, and alternated between 2 lines one with maggot feeder and one with gbait. With 30 minutes left I was blanking but had missed 2 bites and was fearing the worst, the local had 1 gudgeon and there was also a fry caught. I put a 24 and 0.08 on with a straight lead and cast over the gbait line, and caught 2 gudgeon which at least avoided the blank. These two specimens registered 30grms, and I was the top weight for 10 pegs the scalesman told me! I was not looking forward to telling the lads how bad I had done, but they were in a positive mood as we had some really good results and Tony Rixon said he thought I would get 30 points out of 80. The results were done and I've never felt so relieved when I found out the team was 3rd and we got a medal, it was a great feeling. Once the results came out in the papers I found out I got 43 points, it was a shocking section! The following day I continued to catch naff all when I caught 2oz off the lone tree at Frys in the ATWL, once again the team came 3rd!

The picture below is one I recently found, it is from quite a bit later than Oct 1994, Im guessing 2002? This is from when I fished with Avon Angling sponsored by Trabucco. In case you didn't know, the anglers are back row from left to right, Ian Spriggs, Darren Gillman, Bob Sheppard, Tony Rixon, Glenn Bailey. Front row from left to right, Mike Nicholls, Brian Shanks, Mark Jefferies, and yours truly. Note some people have aged better than others, lol! 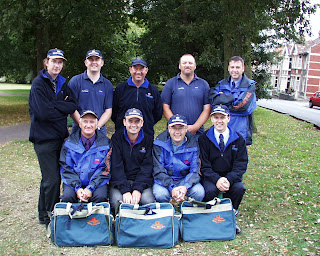