After my last canal debacle I had a word with myself and a good chat with canal bagger Liam Braddell to get my head sorted. I spent a few hours on my day off on Friday making some new rigs, which was a good idea as most of Saturday was spent assembling flat pack furniture! I was all sorted and ready to go on Saturday looking forward to the match, and with the team having a two point lead over Bathampton it was all good.

I was asked to do the team draw again (we've won every time I've drawn recently) and the pegs looked OK with a few good pegs in the mix. I was in E section, Bath side of the recycle tree, an area I've been pegged in before and done well from. First thing to sort was parking at Meadow Farm, and like most other places these days it's a struggle. A nice walk down the hill with Mike Withey and onto the canal where we found no pegs... somebody had nicked all of them! With some memory and some common sense we got ourselves into pegs and everyone was happy, happiest of all was Kev Boltz who we put next to a tree that had fallen into the canal, over halfway! As for my peg it was much the same as the rest of the section, and the view was OK... 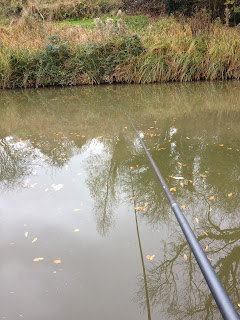 Rigs for this week were two for bread (one for bagging one for errr catching normal) but only one used my faithful Drennan Roach. A deep bloodworm rig (0.5g), a shallow bloodworm rig (0.2g) a caster rig, a chopped worm rig and that was it. As the start approached three boats had already been through, including the big John Rennie, and on the whistle I saw two boats on the way up and so I fed nothing. Ten minutes into the match I started and fed some bread at 5m, some chopped worm at 13m to my right and fed some casters across. The bread line last week was tough, this week it was shocking with only 4 roach falling to the punch, nightmare, but it was poor for all except Kev Boltz who had a 1lb skimmer. Another boat or two and so then I tried bread at 11m in case the fish were across, but they weren't and I never had a bite on this line. It was time to feed some joker swims, and I put some in over my 5m line, 13m to my left and right across. I tried the chop worm but no joy here and had a look on caster and I had a bite and a 2oz roach straight away. It took another 10 mins to get another tiny roach on caster.

In the next two hours I had absolutely nothing, not a bite anywhere and a walk showed that Kev and the genial Roy Carter were doing the best, with Roy having a lovely 12oz roach on the caster. Martyn Rayet and Mike Withey were struggling but had more than me. Another look on the chopped worm and the float didn't settle right, so I lifted it an thought I felt something, so I dropped it and the float went under. I struck and felt something then the float hit the pole and I'd pulled out, fook it!

I took two tiny fish on bloodworm at 5m, I tried by a moored boat but never had a bite, and then with an hour to go I got a few fish going on bloodworm right over. They wouldn't settled though and after 5 fish I had to rest it and then go back, still at least I had a few bites in the last hour, a few! I was happy the match had ended, it had been very poor for me again, not really sure what I'm doing wrong but obviously some bad angling which I need to work out. The scales got to me and I had 1lb 9.5oz for last in the section, Mike had 1oz more, Martyn 2lb 1oz, Roy 3lb, and Kev had 5lb+ which included 2 skimmers and a big rudd.

The great thing back at the results was I had a Xmas dinner to look forward to followed by Xmas pudding and Thatchers Gold! Thankfully once again the team performance was good and despite my ineptitude the team won on the day and that meant we won the league and are in the semi finals.

Winner on the day with 10lb was Neil Mercer, he was one peg past the white gate up by the school, and he had 4 big skimmers to start but then caught all day. Richard Whitmarsh was 2nd with another 10lb, he was the only angler pegged past the Meadow Farm bridge, so the fish kept him company, lol! In third place was that man Shaun Townsend (he might buy a beer soon with all his winnings) with a big 6lb up by the brambles, he caught small fish all day he told me.

In the individual league stakes, Nathaniel Johnson tied with Nich Chedzoy, but Chedz had weight advantage and won, well done. Chedz also won the knockout and bought the lads a drink, fair shout. Here he is telling us all how good he is! Only joking he was gracious as ever and is mightily consistent in these winter leagues, a great angler. 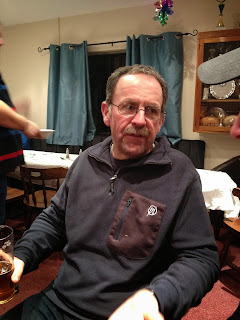 Well that's it for team fishing until the New Year, next week I'm fishing the Bathampton Xmas match, you can choose to fish either the river or the canal (guess which one I've chose) and there is a pairs event too, and Darren Gillman is my pair, as he wants to fish the canal. The river could be awful of course with no rain now for a while, but I need a rest from the canal.

The fundraising for Bowel Cancer UK is going well and I have passed the £1500 mark now, it would be awesome to get to £2000, so if any of you have some spare reddies then visit my just giving page and help fight cancer and save lives.