This blog won't take long tonight, and as it was a bit of a bloggers meeting you will find various other blogs will have more fish to write about!

I was travelling down with Ken Rayner, he knows the way, and when he arrived at my house at 7:15am I had just managed to de-ice the car. During our journey to the venue the temp gauge went as low as -4.5C and we feared for the fishing but didn't think the lake would be iced over, wrong on both accounts! I've only fished this lake twice before and that was in warm weather, but I had heard that the fishing was still good in winter. Draw done and Ken pulled peg 5 (which was good) and I drew 26 which was the other end of the lake, peg 25 was in and is a peg I had before and did well from in summer. The lake was frozen in most pegs, peg 25 was clear, but mine was not so broke the ice out to 13m (as far as I could) which was well short of the far bank. 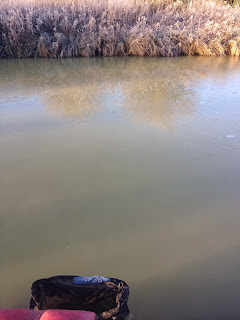 The view up the lake to where my next peg companion Bela Bakos was. 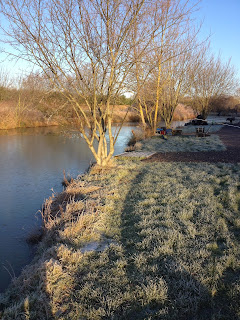 It wasn't going to take long to set up and two rigs did me, a 4x10 with 0.12 to 18 PR412 (for inside margin and across) and a 4x12 Chianti for the deeper water with the same gear. My elastic in one top set was a bit slack so I needed to cut it back a tad, whilst doing that I somehow managed to also cut my finger. I needed a plaster and Bela came to my rescue as he had a first aid kit in the car, it did not look too bad as you can see. 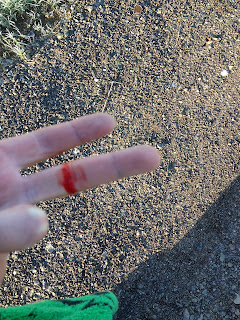 As I got to the car the blood was really flowing now and a plaster would be no good, so I had to make a dressing to stem the flow and also allow me to fish without an issue, I think I went a bit over the top though, lol! It did the job though. 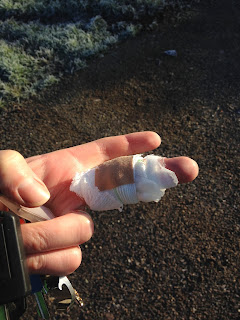 I finally started fishing 10 mins after the whistle and I fed some micros and maggots at 12.5m to my left, gbait to the right, and some micro and corn at 5m. An hour into the match and I had 2 small roach, Bela had 1, but the guy on 25 had 3 carp and had lost more fishing right across, also looking up the bank to the "good" pegs fish were being caught regularly. After another biteless 30 mins I went for a walk, and saw Fred Roberts, Tony Rixon, Phil Harding and Dave Romain all catching across. I went back to my peg and as the sun had been out for a while I managed to break the ice with my pole across to the far bank (Bela did the same). I fed some micro, maggot and the odd grain of corn over here, but it took me an hour to get a bite from a 1lb carp, and next chuck another! That was it for another 30 minutes and it was very obvious the fish were not at this end of the lake. I tried putting some gbait in right over on a new line, this only produced the odd roach.

The rest of my match was dead until the last hour when I had a few bites right across on either corn or maggot, from a few F1's and another carp. Plus two bites from my right margin on double maggot, a roach and a 1lb common. Bela also had a better last hour and caught some carp, he weighed 20lb to my 13lb, but we were the lowest weights on this bank, and I was BBS as peg 25 weighed 23lb of carp. Virtually every peg as you went past Bela the weights increased until match winner Phil Harding on peg 37 had a very good 98lb. I'm sure the other bloggers will have the full results!

A bad for me, which just seems to be the way things are at the mo, but that's winter fishing for you, and I hope the drawbag and fish start to like me again very soon!

Happy New Year everyone, onwards and upwards!
Posted by Tim Ford at 19:35