In Search of Dorset Stour Chub

During my many years fishing one thing I have never done is caught a gert big chub, I think 4lb 1oz is my biggest. I am sure I have lost some large dogs, and one time I hooked one on the high wall up the crane on the stick float, it took me all across the river, I got it back it surfaced and the hook pulled, it was a big un. I mentioned this last year to angling journalist Brian Gay and he said he would take me on a trip to the Dorset Stour where big chub were more of a realistic target. Last year though the river was in flood for a long time and we never had a chance. It was then a real treat when Brian asked me to go this year and I gave him a date I could do.

Tuesday 17th December and at 5am my alarm clock goes off, by 5:30 I'm in my car with minimal gear and a gallon of maggots. I was though not sure the day was going to go to plan as I was sure we'd had to much rain overnight to make the river right, plus I had to listen to England giving up the Ashes on my radio. I arrived at my destination (Sat Nav said so) on the gates of the entrance to Throop fishery, Brian was a little late and arrived 30 mins later though it was still very murky light. To get entrance to the fishery you need a key from the club, or wait for a car to come out and run through the electronic gate lol (we had a key but the car was to good an opportunity to miss). Walking down to the river Brian was still sure the river would be fishable as the local club baliff had set it would be, as we approached I heard a large swooshing sound and unless we were approaching a weir there was trouble..... Yep the river was right up and had a fair bit of colour in it, everything chub don't like, my heart sank. Oh well have to try to catch a barbel or a big roach.

We walked upstream and Brian showed me the pegs that had produced 6, 7 and 8lb chub but none were fishable, we carried on going and found an inside of a bend where there was some steady water which looked like this. 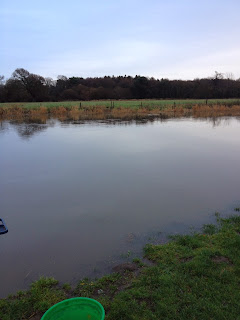 Having no knowledge of the venue I did not how deep the water was or where weeds were, so I spent some time plumbing up a 3BB stick float. The river got deeper as it went downstream, not the best but feeding maggots and casting downstream I got some presentation, but after 45 mins and no bites it didn't feel right to me. Brian was a bit further down fishing the biggest maggot feeder I have ever seen, he was still biteless and picking up a lot of weed. I decided to move down to where the peg deepened and the water was faster but not boiling and fish a maggot feeder, I used 0.16 exceed to a 16 Super Spade, then changed to a 13 B711. Within a few chucks I had what looked like a decent bite but the maggot hookbait was untouched. I think reeled in a couple of times with chewed maggots having not seen a bite despite fishing of the rod end (weed was the problem).

Brian came and sat beside me and we chatted and then I hit a bite and small fish came to the surface and fell off. I was a bit gutted as although I had come to catch a big fish I still like to avoid a blank. Things went quiet and I was feeding plenty of maggots as most casts didn't last long due to the weed on the line. Finally quite a while into the session as I reeled in a washing line of weed a fish shook itself free of weed and there was a little gudgeon, and I thought I would take a picture as it might be a nice memento!!!! 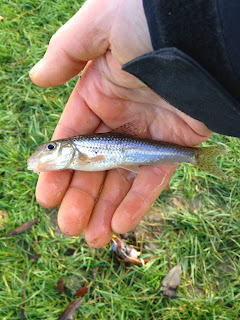 Brian was still biteless but then saw my river skills come to the fore as I started to empty my peg with another gudgeon and 2 dace falling to 3 maggots, lol! During the day we did see a few fish top, nothing massive probably trout or roach, but Brian did have a huge fish swirl right next to the bank, with so many fry in the margins it could have been a predator. Eventually I decided I needed to find another spot to fish as my rod was just getting bent right round due to weed, as you can see... 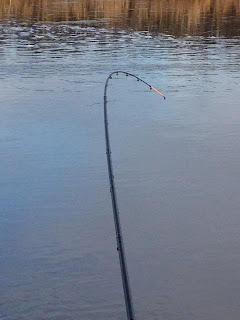 I found a slack next to a bush and it was 8 feet deep and I was gutted not to have found this earlier. Brian reckoned this was an area big bream frequented so I changed to an open ender and fed lots of grounbait, worms and maggots into the swim before fishing it with a lobby over the top. I gave it about 2 and a bit hours here until the light was gone, sadly I had not bites or indications and had to pack up, Brian had had one chewed maggot all day, but he did tell me lots of stories of his chub exploits on this river and those just gave me even more of an appetite to come back again on a fishable river. A day where we could not beat the elements but we gave it our best shot, but being in Brian's company is great in itself and I really enjoyed the day out. No more fishing for me now until just after Christmas, so I would like to wish everyone a very Happy Christmas and hope you have a great time during the holiday, I intend to reduce the size of my collection of bottles of alcohol!
Posted by Tim Ford at 22:23