In years gone by this used to be a massive match and the ONE to win, my best effort I think is 3rd or 4th a couple of times. This year it was a bit different with Kev Dicks effectively running two matches in one with a choice of fishing the canal or river, and a pairs event. I opted to fish the river (not hard after my last 2 canal matches) and I paired up with Darren Gillman who wanted to fish the canal. At the draw it was breakfast rolls for a change, and they were very good, but I wish I'd taken a photo of the roll Martin Rayet had, it was 18" long and had 4 of everything... and he ate every bit of it!

The draw for the canal was done first as they had further to travel, and then the river draw and I managed to be at the front of the queue and pulled out peg 52. I was OK with this peg and then the more I racked my brains the more I thought it was a good draw as a few fish had come from that area on the last ATWL fished up there. Parking up I saw that England international Callum Dicks was on peg 20, a peg I draw a lot and don't do that well off. Walking up the bank I passed my mate Warren Bates on peg 46, and he reminded me that Glenn Bailey won the ATWL off peg 52 when it was up and coloured, how could I have forgot that, lol! Finally got to my peg all hot and sweaty again and surveyed the scene, the river was clear yes, but not what I would consider to bad. I only had two methods in mind as this peg holds bream, so it was pole and a groundbait feeder attack for me. The river was running with a nice pace and a running line might work, but I thought bream would dominate and so discounted the rods and floats today. I had to mix my groundbait on the bank and knocked up 3 kilos for pole and feeder (one mix does for me!) and then set up the feeder with a 20g open ender, and a 14 B611 to 0.128 exceed. Two pole rigs, a 3g PB silvers with 0.11 exceed to 18 B611, and a 1g pencil float with 22 to 0.08. View of my peg today, not much to look at but it is what lurks beneath!

My neighbours today were on peg 49  former Poppy match winner Dave Stiff, and on bream hole peg 54 a young lad who fishes Clevedon matches called Lewis Walker. At the start I cast a big open end feeder across 10 times, it would have been 12 but a boat caught me out and lost the effing lot, lol!!!! Not the start I wanted but I was always going to leave that to settle, so onto the pole and it went 8 big jaffas of groundbait with just a little caster and hemp. Going straight in with 2g float I had 2 small roach in 5 runs through but felt the smaller float would be better, and so it proved with the small roach bites showing up better. It wasn't a bite a chuck but there was enough interest to keep me doing it. I did get a 6oz roach but bites really slowed after this, Paul Dicks walked up and and said 1lb was best so I had more than that and that was OK for starters. I was just about to give up on the pole when a 8oz skimmer appeared and then four little roach and a 2oz hybrid ended the pole line.

Two hours and 15 mins were now gone and so it was time to set up and chuck the feeder out, whilst still feeding some hemp and caster on the pole line. First chuck and a bloody boat comes down so I put the rod down and the tip knocked but nothing to strike at I thought, but when I reeled in 1 of 3 maggots remained, doh! Next chuck I hooked a snag and new hook required, but next chuck a bream of about 3 1/2lb was in the net. Sadly I then got into snag city and had a torrid time, but eventually I pulled something away  and the line became clearer. Lewis came up for a walk as he was struggling, and he had a chat with me, he was fishing it all wrong. He went back and caught a bream and then a few chucks later had one 8lb 9oz and was beating me!

The bream obviously didn't like all this messing about in the snags and it was an hour before I had my next bream, one over 4lb. I tried worm and had a perch, so went back on maggots and thirty minutes later bream number three was netted and I thought a few more would show now. Sadly the feeder line went really quiet and I noticed the sun was shining on the far bank and not what I wanted. With 20 mins to go I decided to try the pole line for a quick look on double red maggot on the heavy rig, I had a couple of quick dips but no fish. I then put on 2 casters and on the first drop the float went straight under and a 2lb skimmer was netted. Going straight back out on double caster I had what looked like the float dragging under but I lifted anyway, it was a bream but soon realised it was fouled as it headed upstream and I pulled out. I then plopped the feeder over this line but it didn't budge and I was thinking the bream wanted a bit of movement so out on the pole again. Another dip and bream on, this was hooked proper and after a good fight a near 5lb fish was landed. One more drop in and another bream hooked but a fouler again and off, end of match. I shouted down to Lewis and a angler watching, they came up and I said watch this, dropped in the rig and it went straight under, and I landed a 6lb+ bream and slipped it straight back, it was firkin solid now!!!!

Lewis had 5 bream the same as me so it was going to be close, especially as he had the big lump. He weighed 22lb 4oz in total. My fish went 24lb 9oz and those early fish on the pole had in fact swung the needle my way. As it turned out my weight was enough to win the match on the river, and overall, which brought me a nice payout, a hamper, and the trophy. Only took me 30 years of trying! 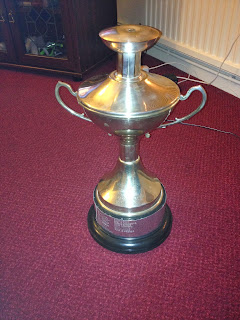 The river had fished very hard in places and as I expected the top weights had bream in them, bucking the trend was Steve Hutchinson who had 10lb of roach from peg 76. Winner on the canal was, well you can probably guess as he IS THE man in form, Shaun Townsend. Shaun had a massive 19lb from Limpley Stoke, and included in this was at least 3 perch over 2lb, and he lost 2 others bigger he told me! Below is the sheet showing everyone who weighed in today. You will not see Callum Dicks name as he DNW, he actually hooked and lost a carp of about 8lb and he said he came to the river to get away from them, lol!

Next week I'm fishing Bitterwell for a CLIC charity match, a bit different from today. 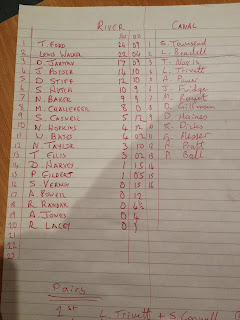