Saturday was a busy day, trying to sort leaks on the house causing damp (and thanks to Bela Bakos it looks like we've sorted them), doing rigs and replying to texts and calls of people who really were not looking forward to fishing on Sunday due to the weather forecast. Of course I also spent some time tying rigs and liquidizing bread, and had a few pints with Bela and Mike Nicholls.

Come Sunday and I loaded up my gear making sure the brolly was in the car and my water proofs. At the draw I found out I was leading the league individually and was up against team captain Mark Harper in the semi final of the knockout. I was in the same position after 4 rounds on the ATWL, but that went tits up, and I haven't done well on the canal so would need some luck. Mark asked me to do the team draw, and I put myself in Darlington Bay and Mark up by the wooden bridge wires which has been very good. Darlington has been fishing terrible, but two skimmers did come out of my peg last match, and when I saw 3 fish roll in a couple of minutes (when setting up) I was feeling happy. Next peg to me in the bay was Simon Alder (old Silver Dace pal) and one out of the bay on one of my favourite pegs was Liam Braddell, so I was expecting a lesson as he is the best canal angler around! Here's the bay and my usual friends the swans. Simon had the boat to fish to my peg was more to the left but took the photo like this... 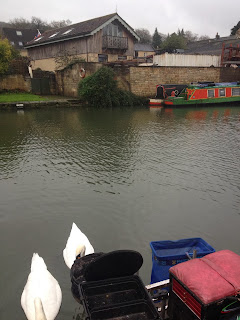 I decided to fish positively, setting up 2 bread rigs, one with a 18 Pr311 to 0.07 and one with a 16 PR311 to 0.08, a .4grm PB silvers with 20 PR311 for fishing at 13m, and the same float with thicker bristle for worm with 16 B611 to 0.10. Also a waggler was set up for fishing caster across. On the whistle I fed the bread at 5m, dumped some joker in at 13m 11 o'clock, gbait with joker and caster 13m 2 o'clock. Chopped worm went in a bit later at 14.5m down to my left. I went in on a piece of punch and praise the lord the float went under a few times, but I never hit the bites so put a smaller punch on and caught a little roach. After the first hour I had around 25 roach on the bread but they were small and I never needed the net. As this was now slow I tried my 13m lines with a maggot on the hook. The joker line first gave me a little roach and then a better one which was grabbed by a pike! I played tug of war and held my top five up high and the roach flew out of the middle of the canal and landed in my chest, lol! At nearly 4oz it was to be my best fish.

The gbait line only produced a few small gudgeon so that was a waste, but the neat joker was giving me the odd fish. If I put a bloodworm on I would get a fry, a pinkie or a maggot would be a long wait for a 1/2oz fish so I was going nowhere fast. I kept trying bigger baits for the skimmers as I felt this was my best hope of doing well as catching tiny fish was not my cup of tea. About halfway through Liam was well ahead with more bread fish and a couple of better perch from next to a big bush, Simon was finding it tough. The rain was belting down and I was glad I had my brolly, as were my neighbours. The waggler had been tried a couple of times but I had no bites, and I had put some joker in close just in case some perch would play ball, but that just got surrounded by more fry.

I think it was with about an hour to go the rain had abated and I was still fishing positively when from nowhere a gust of wind picked up my brolly and in an instant it had gone 30 yds and over the railway line and down an 80 foot drop... bye bye brolly, only used it twice. Still the walk back later was easier without it.

With half an hour to go I had a small roach on the waggler, and then another 5, these were all on red maggot and were better stamp at an ounce and a half lol! The match finished and I knew I was not going to pick up any coin and having spoken to Mark a couple of times I was going out of the knockout (he weighed 3lb 5oz). When the scales finally arrived 6lb was top, and Liam had 5lb, my effort today was 2lb 14oz which actually turned out to be OK as I got 10 points from 13. That means after 5 rounds myself and Mark Harper are now joint leaders on the individual front, and Mark will fish against Andy Britt in the final of the knockout. The match today was very peggy, and some anglers had a great bag whilst many struggled, for example Vinny Lunn had 8lb 9oz, he said he had 8lb after 30 mins! Kev Dicks had 1.5oz.

Neil Mercer won the match from end peg F13 up past Diggers towards Dundas, skimmers and roach. The rest of his team mates asked me to put on my blog that Neil never bought his team mates a beer which is very poor, breaking a tradition the tight wad. I think Vinny was 2nd, and Mike Withey was 3rd with a high 7lb.

Thatchers B won the A div on the day, with my lot coming 2nd and we now have a 1.5 point lead going into the last match. The B div is very tight with 1/2 point covering the top three teams!

Back here next week for the final round and hoping to finally draw on some feeding fish (not fry).
Posted by Tim Ford at 20:08