Got back Friday from a very nice week in West Bay, I think I should take up competitive crab fishing as I seemed to do well in the harbour, with 8 crabs in one drop my best haul. My nephew Liam below showing a good haul of crabs taken in an hour. 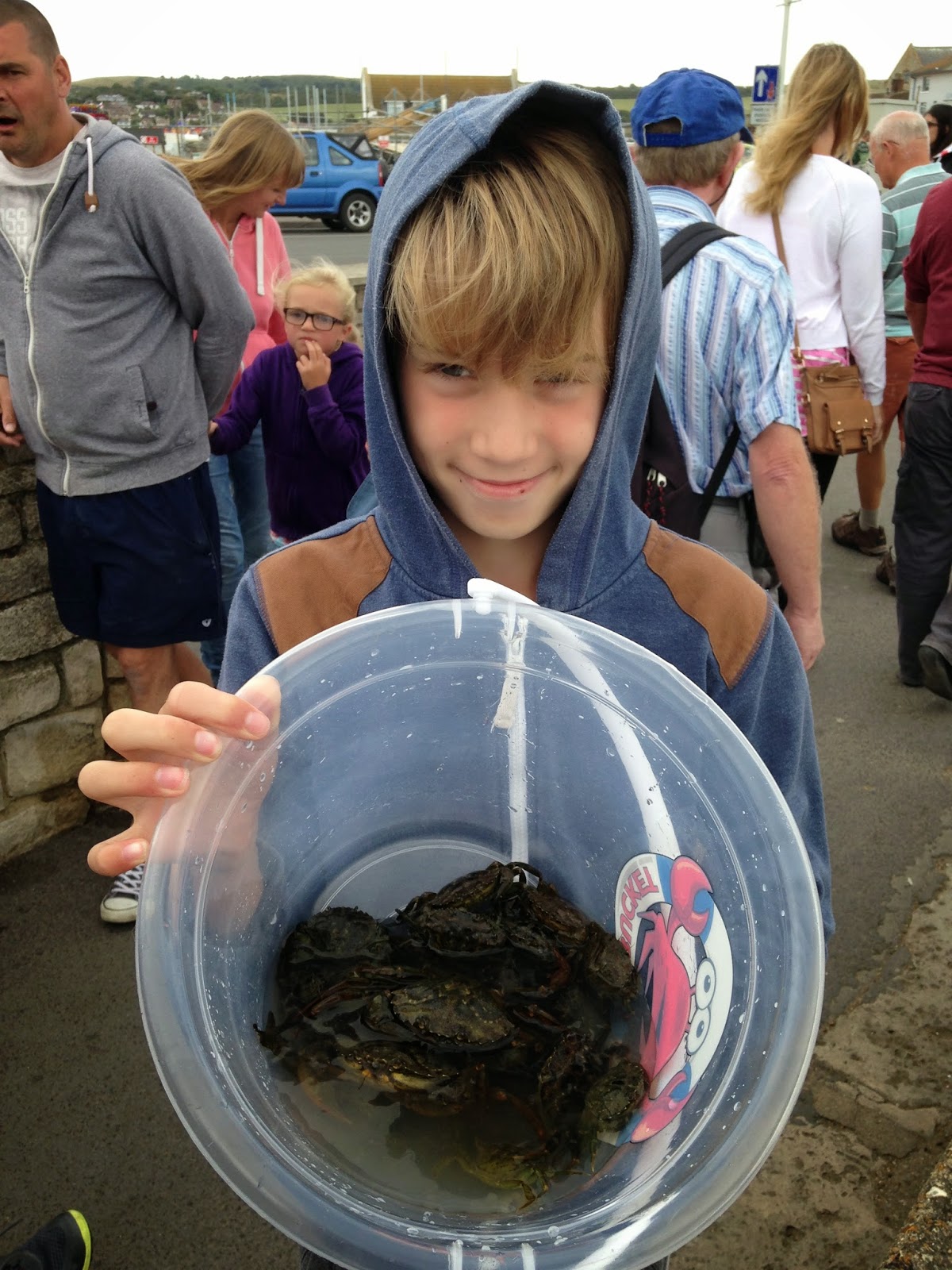 It was whilst I was in West Bay that I received a text saying I was now needed by Thatchers for the Superleague, and that meant I had to apologize to the Cardiff lads who I had said I would fish for. I started the day with another Wetherspoons' breakfast and hoped it wouldn't be the best part of the day. I didn't think the bream would show today, except in very few pegs, so a roach peg would be nice, peg 7 in the little field has been consistent in recent weeks, but Darren Gillman drew that. Team draw done by Liam Braddell and I was to spend a day on peg 79. Not normally a favourite but a couple of weeks Shawn Townsend had 11lb of roach from it, but Dave Micklewright told me he struggled for 5lb+ on it last week. The picture here of the peg was taken after the match when the wind dropped!!!! 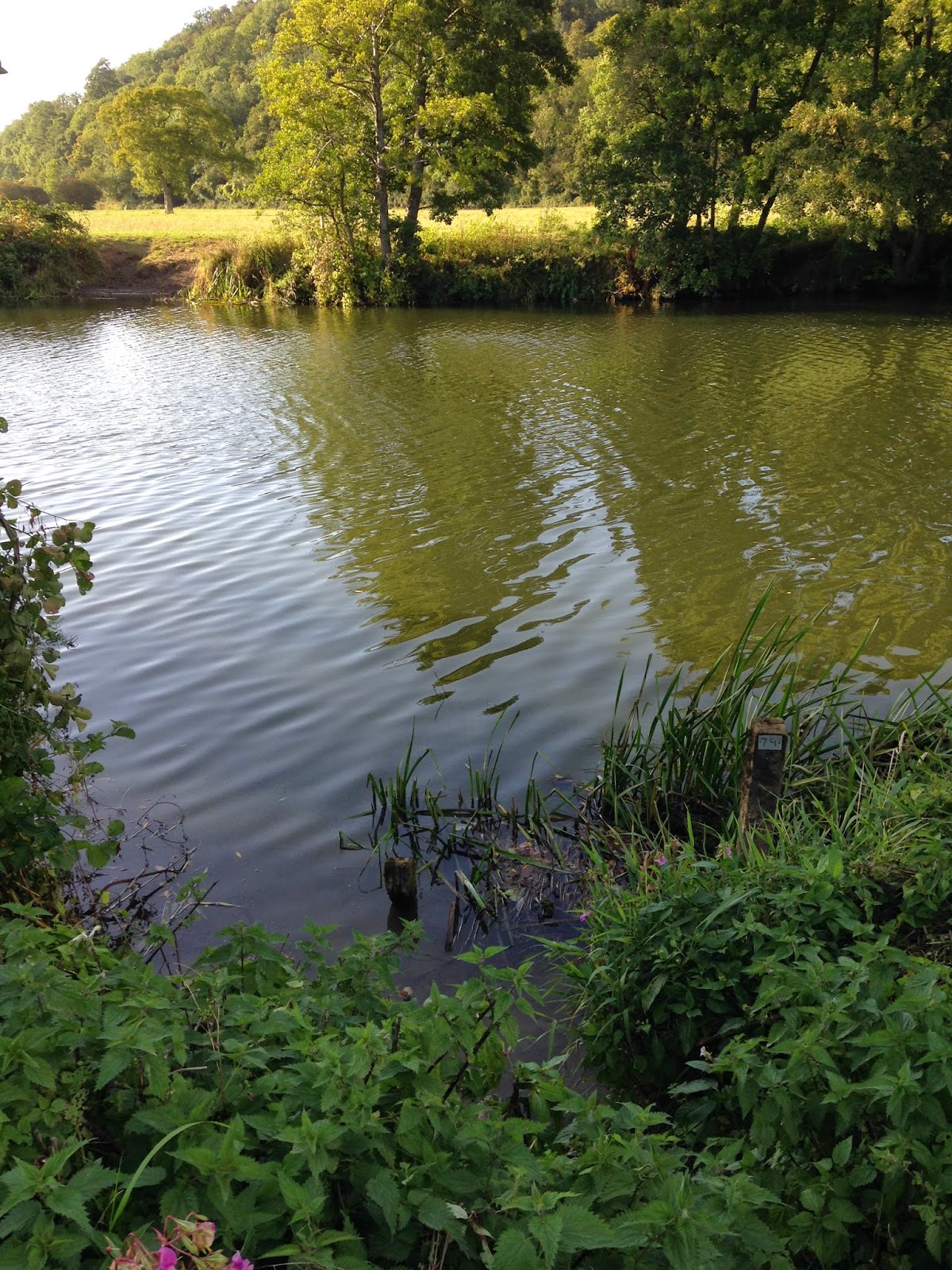 In the car park loading my trolley I realised I'd left my waders at home, luckily Glen Calvert came to my rescue with a pair of wellies. I needed the boots to get my box in the water which was nice and comfortable today. Setting up today I weighed up the pegs in my section, the two below me are not always great but they have lots of room, those above me to the bridge hold bream, roach and chub, above the bridge roach and skimmers. I reckoned I was away from the bream and so really had to hope for a good day on the roach to do well. Pole rigs for 12m were 1gm, 2gm and a 4g flatty, a 1.5gm rig for chopped worm was also put up for fishing out about 4m. I set up a feeder rod initially with gbait feeder as it always worth a chuck.

I threw in 10 balls of gbait today a bit less than normal and with less loose feed in than I have recently, as I didn't expect a huge weight. I dropped straight over the balls with the 2gm rig and the float buried, sadly the 2oz roach fell off as it surfaced. Next chuck I bumped one, and again, the fish were off bottom I thought. Onto the 1gm rig now 9" off bottom and a roach was landed on the caster, and the hook was well down its throat. It was hard work but I was getting indications most casts on a caster, the roach were smaller than I hoped for, but I did net a couple of 4oz samples. Things went iffy, I was missing bites, and with the wind being a problem I went back on the 2gm rig on the deck and caught a few more roach and tiny perch before the bites died. Even the light float with a 22 to 0.08 was now not working and the odd bite I did have was from tiny perch or less than half ounce chublets! I now fed some chopped worms and casters in close as it looked like I would need to catch some perch.

The gbait feeder was dire, although I didn't really give it long enough as I wanted to try the pole again. The long pole was completely dead all bar 1 tiny perch. On my chop worm line I had about 6 to 8 perch from 1oz to 6oz in about 30 mins fishing, I never had another bite here all day! In fact a little like my last match the fish got the better of me and I couldn't raise a bite anywhere, sadly I was shitting myself more than fishing at this stage, not good and not nice... Bank runners asked me what I had and I thought I had only 2 1/2lb, it seemed most people (other than Richard Chave on 74) had caught more than that and I was looking like being last in the section.

I switched to a maggot feeder cast right over to the far bank and I could get bites here but it was from gudgeon, tiny roach and those tiny perch again. These weren't going to win me anything but I was hoping a chub or other bonus fish would get me out of jail. Despite some really good looking bites (which were all from gudgeon lol) I never did get that bonus and I ended the match not feeling to special.

The scales came from the top of the section and a 5lb and 6lb were recorded above the bridge, Chavey came last with 2lb 13oz,  then another 5lb+, then 4lb 11oz, and then I tipped 5lb 1oz on the scales which was double what I thought I had, oops!  The lad below me had 3lb+  and then the end peg won the section. So 4 points out of 8 for me, not good but 3 more than I thought I was going to get.

I wasn't going to go back to the results but Andy Ottaway talked me in to going back, but only after I had thrown another pair of pants away! The team had a good day, Nick Chedzoy, Martin Barrett and Andy Power won their sections, Ottaway was 2nd and Leigh Trevitt 3rd. Adding their points to Colin Dance, Liam Braddell and mine we had 49.5 points and won the day and now lead the league by 27.5 points. The last round is back here next week, should be a grueller then!

Darren Gillman did the business on peg 7 winning the match with 16lb of roach, in 2nd was Kevin Abigail on the other form roach peg last one on the trees with 14lb. As predicted very few bream were caught, and with roach not really playing ball it is a tough venue at present. Waiting now to see if I'm fishing or not next week.

Added a new blog to those I try to read and keep up to date with, this one is called 26 year itch, and is written by Cardiff Nomads angler Mike Davies.
Posted by Tim Ford at 21:08