I start my blog with some bad news and ask that everybody please keep their eyes open. Some thieving shit has nicked Lee Trivetts gear after the match. His van was parked by Keynsham angling and his seatbox, holdall and carryall were all taken. Virtually everything was Preston Innovations gear including a Absolute 14 pole. Sorry mate, hope it turns up.

Well back to the events earlier in the day, which started with an almighty cock up, the draw venue the rugby club was not open! That meant parking was a nightmare and most of us were hungry. The draw was done and I was going to be fishing in the long ashtip field, but before that I visited McDonalds in Brislington to get a Mc Muffin to keep me going.

I arrived at my peg after getting the gear over two styles (thanks to other anglers) and found myself in the middle of the field on peg 79. Below me was Kevin Dicks on 81 and above me on 77 was Leighton Warden. I had to get into the water to fish this peg but it was easy enough, but there were a few tree branches out in front of me which would limit options. 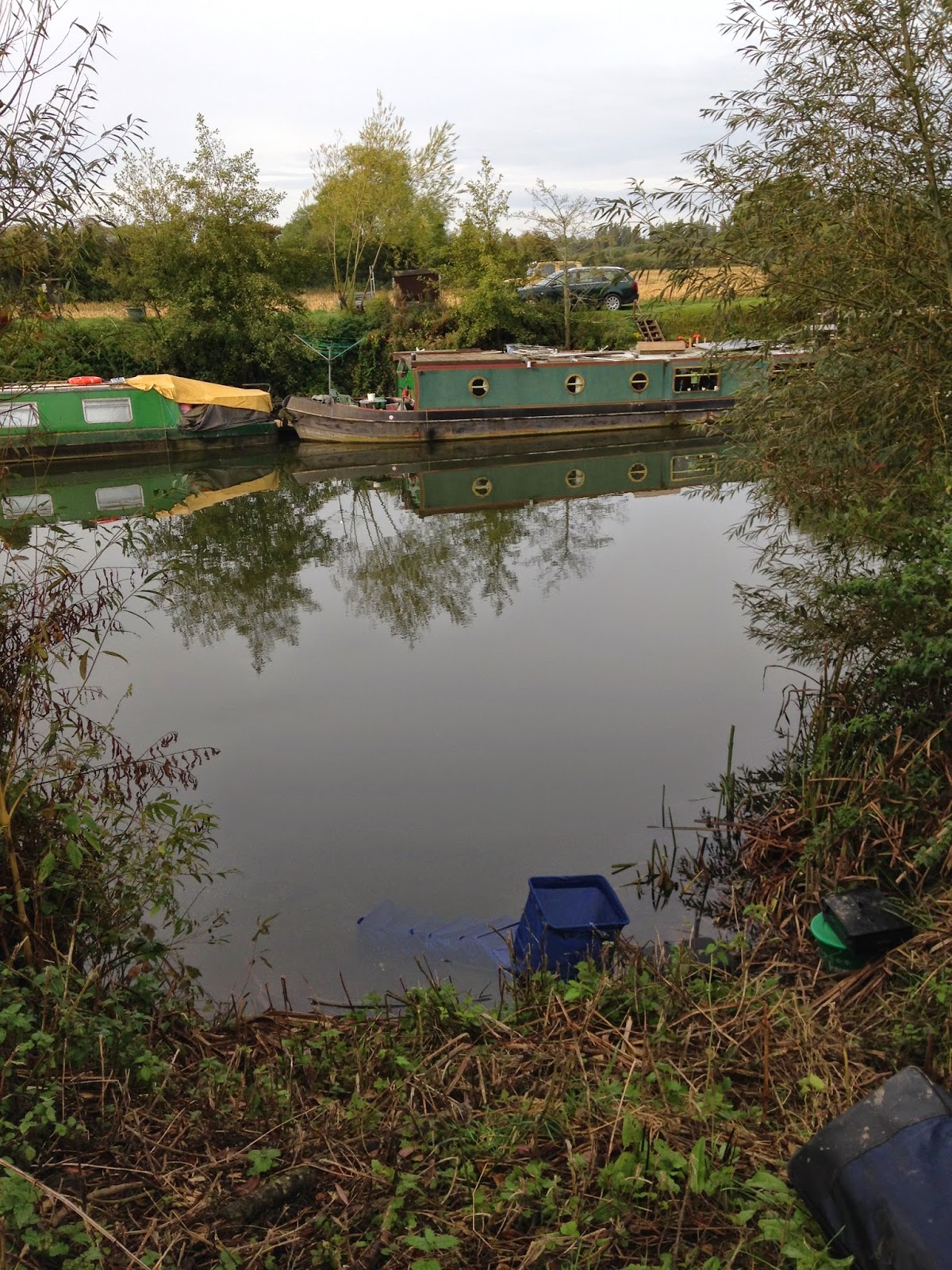 It was a rush to get ready for the start of the match but I just about managed it, though I didn't have time to put hook lengths on my feeder rod and my crowquill rig. The pole rigs were as usual 1gm pencil float, 2gm, 4gm flat float and a rig for perch. I threw in 12 balls of gbait at 13m to begin and started on the 2gm rig but I had no bites for 10 mins. I then started to get a few bites but caster on the hook was a complete waste of time and I was soon trying maggots. This was better but I was missing more bites than hitting, and when a pike took a fish and bit me off I reached for the pencil float. With a bit of alteration to depth and shotting I started to hit more bites but everything I was catching was tiny roach. I hooked a better roach and that was soon gone after the pike took it. After about 30 mins Andrew Trudgian turned up to watch me, I'm not sure if he learnt anything as I was mainly catching tiny roach and lost a few more hooks to pike. By now my elastics were looking awful as they had been well stretched by the pike, and I'd lost one rig.

I started to get a bit of a run together on these small roach, with single bronze maggot best. I was loose feeding casters and hemp on the pole line and also maggots further across the river, small fish were topping and it was evident the peg was solid with bits. A jack pike took another fish and I got this 3lb+ fish all the way in and was about to net it when it dived into some reeds, that finished off the hook length and the rig went up a tree, I had no more pencil floats in the box! Luckily I managed to get the 2gm rig working better and Mr pike never bothered me again. The roach were still small and if I did get a better roach it was a one off. Colin Dance walked up behind me and said I was catching quicker than Kev Dicks but his fish were bigger.

With 90 mins to go the pole was drying up and a try on my chopped worm rig was uneventful all bar a 1oz perch. I tried the crowquill which I had attached an 18 to 0.104 and used double maggot on the hook. It was hard going as the wind was downstream now, but I could get bites on this and although hitting the bites was tricky the fish were a better stamp. I cursed myself for not trying it earlier.

The match ended and I was knackered, it was a very busy day of shipping in and out and it was hard work going back up the bank. I wasn't sure what I had but thought 8lb+ which wasn't going to beat Kevin below. As it was Kev weighed a very good 12lb, and my skerrits went 10lb 5oz, I was beaten again by the section winner Mat Challenger of Scotts Tackle who did brilliantly to weigh 14lb of little roach. I did chuck my keepenet at him as he'd kept that quiet lol!

Back to the new results venue the Lock Keeper at Keynsham and it seemed the result was going to be tight, but in the end my Thatchers lot managed to win the day beating Bathampton into second. I didn't know the winners name today Ben.... he had 17lb from the top of the cow drink at the crane which included 4 good chub, that peg doesn't often win a match! In second place was an old mate of mine Paul Staite, he was on peg 9 in the first field at Swineford and also had 17lb which was made up of 4 bream and bits, well done matey. In 3rd was the now bearded Andy Ottoway who do well to catch 16lb from the high wall, Andy had a couple of chub, roach and a lot of perch. I think Jerry Pocock was 4th from peg 27 at Swineford with a brilliant 15lb+ of roach on the crowquill.

With Jack whites throwing up a 12lb and four 11lbs, and plenty of small roach everywhere it was a match where people had lots of bites.

Next week is round 2 up at Newbridge, hope it rains some more, fancy a lazy feeder match!
Posted by Tim Ford at 20:32