I was looking forward to this match as the rain in the week had put some pace and colour into the river. Had a bit of banter on facebook with Graham Hunt, when I said to Clive Branson it would be a "FEEDER JOB" Graham quite rightly explained how it could still be pole fished. I said it was still a feeder job lol, well we would see.

At the draw I was asked where I would like to draw, and I said of course the usual bream pegs but definitely did not want to be in the little field. Liam Braddell does the team draw and I find myself pegged in little field on peg 7 which has been a brilliant roach peg of late. With 6 pegs in my section in this field and 6 up at Rotork where I expected some bream to be caught I was not happy! I had a little moan at Liam and then went on my way, I didn't think our team draw was that good either today.

There were some good river anglers in my section today, Darren Gillman was on 12A (but I didn't fancy that peg, Brian Melksham on 12, Glenn Calvert was below me on 10, above me was my good luck charm Mike Martin-Davies on 5 and Vic Abbot was on 3. The banks were very slippy and I slid down on my arse once, so cut a few small steps out to stop that happening again. I only set up two pole rigs today, a 5grm Preston Silvers float with 16 to 0.12 exceed, and a 6grm flatty with 16 to 0.14 exceed. A feeder rod with a 13 B711 to 0.165 exceed line finished off things and that meant I was ready on time. I should mention that I have recently been using the Sonubaits groundbait in my mixes, today I had some of their river and lake, brown crumb and some red magic mixed up. I made up 14 big balls of gbait which had hemp, casters and chopped worms in them. I threw these in at around 11.5m and dropped in with the 5gm rig. I had 2 roach on this rig in 20 mins and with the lack of fish topping I thought already this wasn't going to be a roach day. I tried the flat float and had a small perch on this and then hooked what I think was a better roach but it came off on the way in. 45 mins and things were not good and I reached for the feeder rod, to begin I thought I'd fish it over the pole line as there were quite a few leaves coming down which would make going further over tricky. A gudgeon and a tiny perch and a couple of tiny indications were all I got on bunches of maggots. Time for the worm and first cast on a dendrabena I had a 2 1/2lb skimmer. I spoke to Darren on the hour and he was really struggling so I was happy enough.

15 mins later and another good bite and a 4lb bream really pulled hard in the extra flow, but the fish was well hooked in its rubbery lips and was landed safely. Another bream of 4lb and a 3lb bream quickly followed before all went quiet. A couple of piccies from my other lucky charm Ryan Clancy, he took these of me without me knowing! 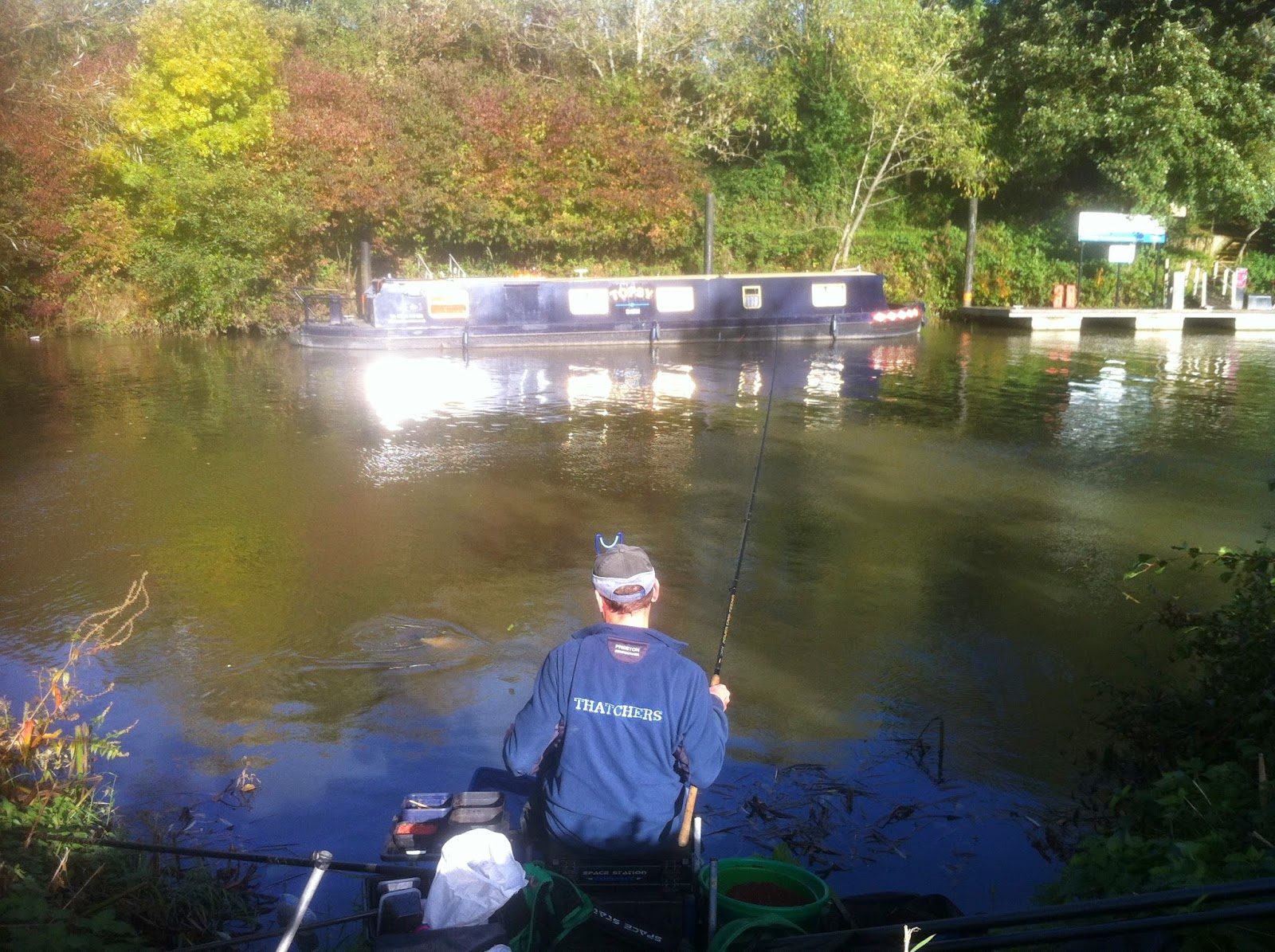 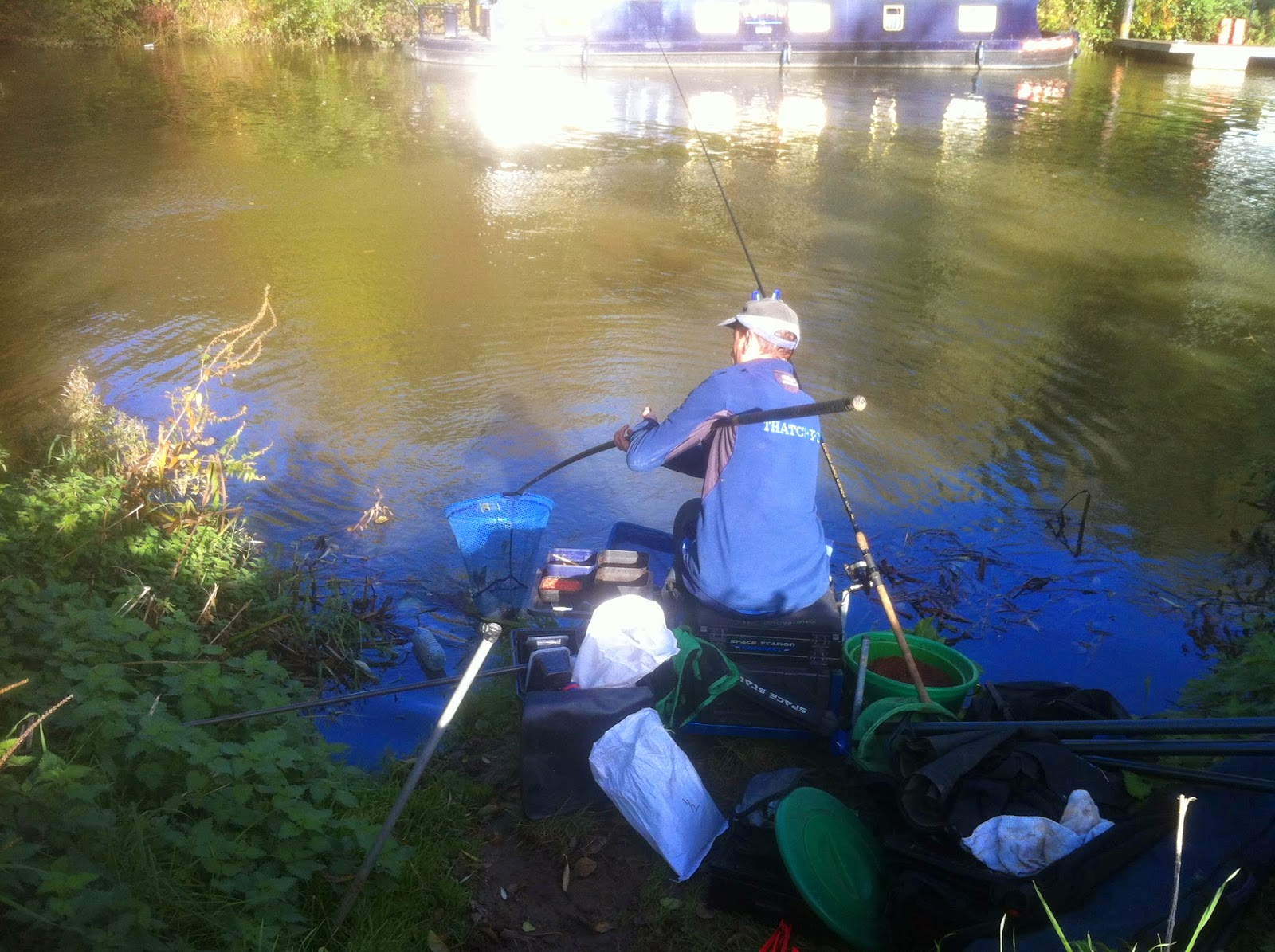 All went quiet for about 30 minutes and then another good bite saw me bump a bream, damn, the worm had doubled over the hook. That knocked things back and I had wait another 30 mins until my next bite, but disaster,I struck and felt a heavy weight and the line parted above the feeder. That had never happened before, but I realised later what I had done, I had been rubbing the line against a zip when plugging the feeder with gbait, so I moved the gbait bowl to my right (as you see in pics above).

I heard that Rich Lacey up at Rotork had some bream so I gave him a call and he had 7 so he was beating me. Having re set up things were still quiet and knowing I had nothing to lose I put on a bigger feeder and fed heavier with casters and worms. This soon had the effect of another bite, but this time from a 1lb perch, and then a smaller perch, not usually a good sign. Ryan then came and sat behind me and promptly saw me hook my first snag, I managed to reel this in close before it got lodged and I lost the hook. Then about 12 mins after this I had another 4lb bream, and then another. All of a sudden my swim was full of bream and I was getting what looked like bites within a couple of minutes, but sometimes it was liners I think. I switched to double dendrabena and this target bait brought me bites within seconds of hitting the bottom, and I hooked a real beast of a bream which turned out to be 7lb 14oz (my biggest ever). Ryan was amazed at this spell and so was I! I reckon I had 6 bream in 20 minutes. Here is me with my biggest bream (thanks Darren Gillman) 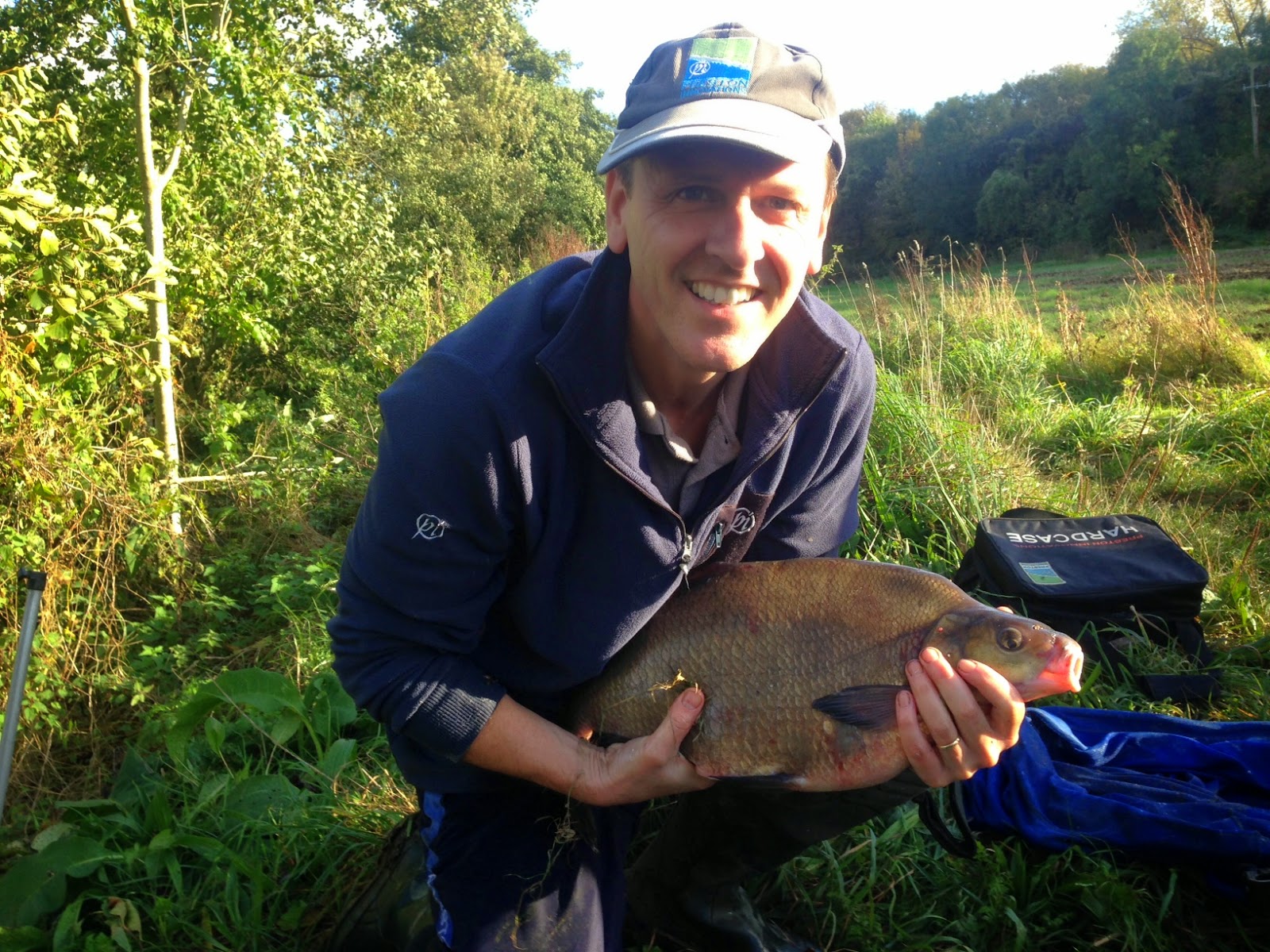 After this mad spell the swim went quiet again, obviously the shoal backed off again. With 30 mins to go Martin Barrett rang me and as he did he hooked and lost a bream, and as he was telling me he wished he hadn't phoned me I had a bite and hooked one and told him I had to go (lol) it was another 3lb fish and about 15 mins to go had another. I missed a definite liner (nearly pulled the rod in) and that was the match over. I thought I had 12 bream so well over 40lb.

Jerry Pocock came down with the scales and other than myself the little field had fished as bad as what I had expected it to, with a couple of 2lbs and a couple of 4lbs. After a few weighs Bri shouted out 51lb 2oz, my best weight at Newbridge! Darren took a little video of part of the weighing in..


Back at the results I found out that Rich Lacey had weighed 39lb and he was to come 3rd overall, in second place was Lee Warden on peg 26 who had 42lb of bream on the feeder. Of course that meant that I had won the match, yay!  Martin Barret came 4th with 28lb. Unlucky angler on the day was Roy Carter who was paid out for 5th overall, but then the organisers made a mistake and he was 6th and first out the frame, but he did get his section by default!

Thatchers A came joint 1st on the day and so we now have a 3 1/2 point lead over one of the Bathampton teams with the league now at its halfway point.

I certainly got a bit of stick afterwards for not looking forwards to fishing my peg, it is strange how things can turn up and why I was the only one to catch bream in the field I don't know. Certainly the Sonubaits gbait is working fine, and it was great to feel the heavy thud of slabs, told you it would be a feeder job Graham ;-) Today is why I love fishing the river, not just catching a net ful but because you never always know just what will happen, and the extra water does move the fish around. Next week its the ATWL back down at Keynsham.
Posted by Tim Ford at 20:36