Well time seems to fly and another Commercial House League was coming to an end, with 6 teams in each division this year it has been a nice even league. Once again I let myself down in the preparation front as Saturday I took my daughter back to Plymouth University after her Xmas break. When I got home from this trip I got some bread and my liquidized bread out of the freezer and that was about it! I knew I needed some new hooks tied but decided to do them on the bank.

I was glad the wind was not as bad as previous days (another fence panel in my garden has gone to heaven) but it was still going to be awkward in some places. Liam Braddell was winning the individual stakes of this league with 57 points, and I was 2 points behind him. This was a very similar position to last year when on the last match I overtook Liam to win the league, would lighting strike twice? Liam did the draw for the team and the best peg went to Gary O'Shea who we were still waiting for to turn up lol! Liam was up at Dundas but in a poor area of his section, I was in the same section as last week but not sure where. I set off from the draw to park up at Darlington, and then walked up past the bay, past the turret pegs, past the wooden bridge and found Andy Gabb on peg 2 who was pegged UNDER the wires!!! Andy moved to his right to make it safe, as I was peg 3 I would be the other side of the wires, a good peg normally but was shite last week. I found a lady looking at my peg number, turned out she wanted to moor her boat there, she was none to happy when I said no way but then she pointed out I was in a no fishing area as the warning signs showed! I moved about 4m to my left and set up in piles of dog shit!

Luckily for me the lady never showed up, but to my right a bit further a boat had moved and I expected it to come back. The wind was gusting on and off here and so I made a couple of changes to my usual canal set up; 1) used my short no4 section (which was a godsend) and 2) didn't set up my drennan roach punch rig but instead a Preston wire stem 0.4g PT Series 4 which I have been wanting to use for a while as it is my bagging rig, but still with 0.07 to 18 PR311. Here's the float.. 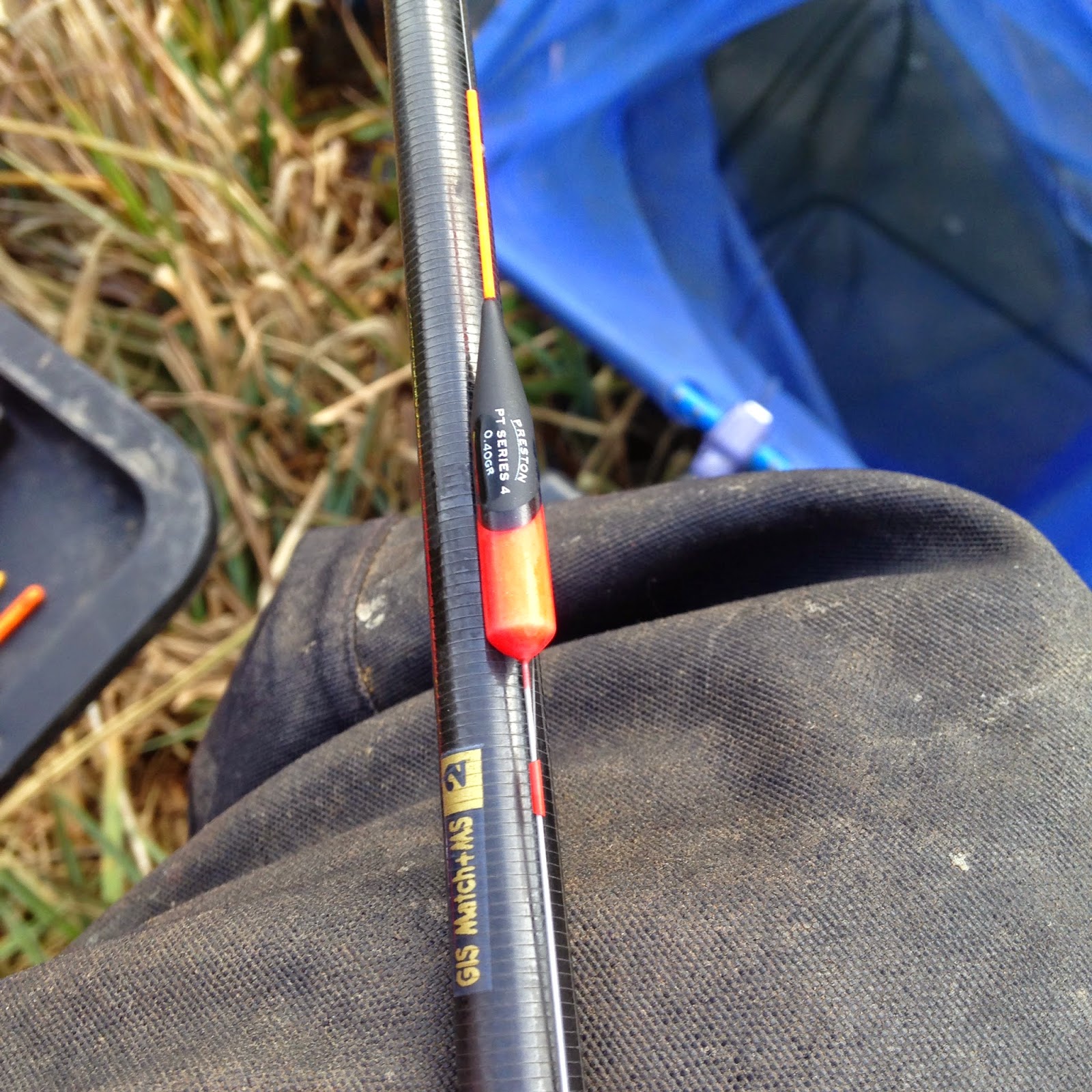 Also set up my usual 4x12 bloodworm rig for fishing against the boat and across at 13m. A caster rig was assembled but I hooked this up in the tree branches and lost it and my lucky plummet :-( To be honest other rigs were a waste today so no mention. Can you see the tricky branches on the tree across? 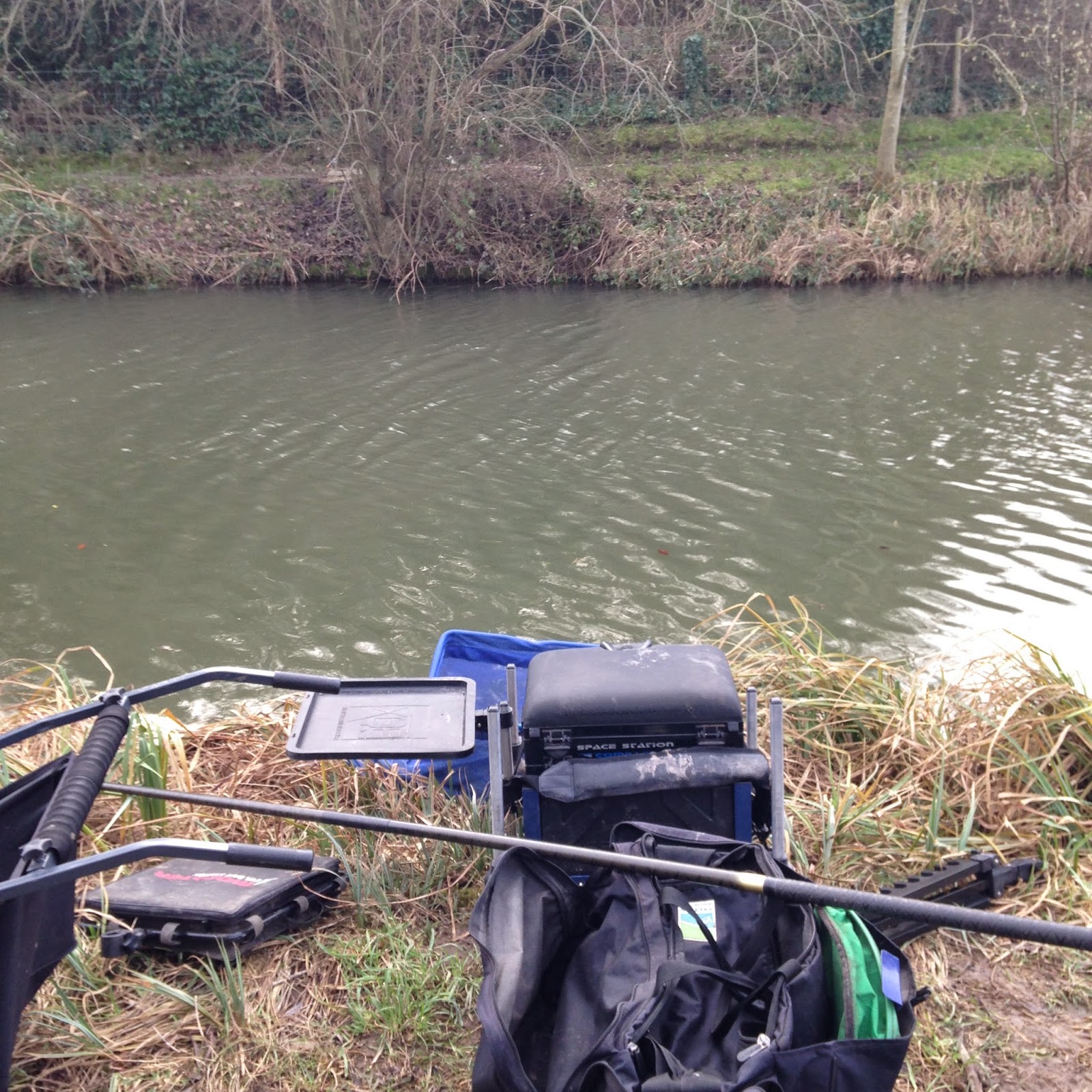 Glenn Bailey was out for a stroll and and he sat with me for the start of the match, I fed bread on my top 5 line, then some joker to a boat to my left. I was going to feed joker across but noticed something going on with Richard Whitmarsh and the boat moored next to him, it was moving! I decided to get over my bread line immediately, it was a good move as an 8oz hybrid was netted first chuck. I lowered the float in for a second time and another lovely bite resulted in a 12oz hybrid. I then had a little roach so I put a bigger piece of punch on and dropped in, the float disappeared soon after and a skimmer over a pound was the culprit. Next drop in same result another skimmer, wow! Glenn said there are 9 minutes gone and you have 4lb, and where was this boat? Turned out it was facing the other way so I need not have worried. After this amazing start the bites stopped and then a boat went through. Once the water settled down I fed some more bread and also some joker across. Bites were slow on the bread and now just from the odd small roach, pinkie on the hook improved things and then on the hour I hooked a lump which I told Glenn as soon as I hooked it was fouled, and charged off to the far side and the hook pulled.

Glenn went off for a walk to see how others were doing and when asked only said I had 2lb, oops! My joker swims yielded a 3oz roach on pinkie and then tiny fish on bloodworm, but I stuck with them hoping things would improve. I felt I wasn't making enough of the peg and decided on a bold move, I fed chopped worm, caster and joker on my now dead bread line hoping the skimmers would come back. When Glenn came back he told me Mike Kent on the end peg was probably beating me but the rest were struggling.

I did get across for two drop ins on my caster line and had two small roach, but the wind got so bad I could not fish this again all match. Dropping in on my short line with my bread rig, now fished slightly over depth, with double pinkie I was soon netting a 4oz roach. No skimmers showed on this line but I did get ruffe, perch, gudgeon and roach on either pinkie or small bits of worm. As this feeding had done me OK I fed the same again on the same depth which I found at 11m straight across. To be honest I stuck to these two lines for the remainder of the match as fishing at 11m at times was almost impossible and my joker lines further over were out of reach. I can't complain as I stuck it out on bigger baits for better fish (as bloodworm only brought bit) and caught odd fish till the end. I thought I had 8 to 9lb.

Andy Gabb had the scales and board so I helped him and went up to peg 12 and weighed Mike Kent first, he had a very good 9lb 12oz and he had added 3 to 4lb of roach on caster late on to his skimmers. The next 5 or 6 anglers all struggled for 2lb odd, with Shaun Townsend getting the wrong side and coming last with 2lb 1oz. Vinny Lunn had 3lb I think and then Rich next to me had 3lb 14oz. I weighed less than I thought with 7lb 15oz but this still secured me 2nd in the section as Andy and the lad on peg peg 1 both had a couple of pounds only. I had heard that Liam was struggling, and as I walked back up the towpath with the wind now blowing rain in my face he called me. He'd done bad and I had beaten him, he congratulated me but said he wasn't coming back to the results!

Gary O'Shea made no mistake on his flyer at Richardsons and won the match with 13lb 6oz.
2nd Rob Randell 12lb 15oz (from a right bung hole, Dundas bay all on his own!)
3rd Graham Hunt 11lb 12oz (perch at Limpley)
4th Lee Trevitt 10lb 13oz (skimmers and roach at Limpley)
5th Mike Kent 9lb 12oz (thanks for framing Mike as I got the £60 section by default!)

On the team stakes:-

A Div my lot Thatchers A won the day and we won the league by 11 points, the B team came 2nd beating Bathampton by 1/2 a point.

B Div Sensas Wilts Green won, M&N Electrical came 2nd and both are promoted to A Div.

The knockout was won by Kev Dicks, runner up Roy Carter

Biggest fish winner, me with a 7lb 14oz bream

I'm not sure if anyone has ever won the individual 2 years on the trot but it is something I can add to my CV (sorry Liam lol). You can't win the individual from bad draws so I have to thank Liam for drawing me some decent pegs (is this getting too much now Liam? lol)

Well done Mike and Nicola Goodhind, and Vinny Lunn for running a great league, I cannot wait for the next one!