I didn't get the chance to wet a line this weekend as Saturday was spent at Bristol Rovers in the hospitality suite, with good friends and my eldest daughter Lucy. We had a really good time and although the game was a bit tense at times the result was great. Here's a pic of Podge, Benz and Lucy with man of the match Rory Gaffney. My wife came along too and very kindly drove meaning I could enjoy a drop of cider. 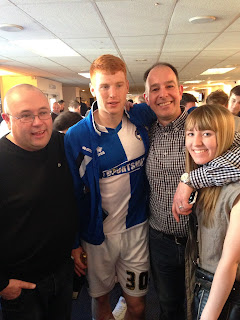 I couldn't wet a line Sunday (no it wasn't due to a hangover I was fine) as I was driving Lucy back to Plymouth for her last term at Uni. I am therefore getting my fix today by reading all the other blogs. Anyway, for those interested here's some more extracts from my diary.

First up Saturday 4th October was the Woodlands View winter league, where I drew peg 19 on Deans and endured a tortuous day catching only 5lb 10oz on maggots. I've not recorded how bad that was on the day but I did record that chopped worm worked best on the day as the lakes fished terrible. The following day it was back to the Bristol Avon on the ATWL where I hoped for a better draw. Sadly I didn't get my wish and a peg in the middle of the long ashtip was not good (back then this field was always a struggle). The river was low and clear and had struggle written all over it, and I set my stall out to catch what ever I could on the float. I loose fed caster and hemp on the pole and 3/4 of the waay over. The pole line was poor and nearly all my fish (roach, and little perch) came to the far line swapping between a waggler and crowquill. Red maggot or caster on the hook was best, and my weight was 1oz more than the previous day at Woodlands, today though it was worth 12 out of 13 points and the team won the day.

The following weekend I fished on the Sunday in the Commercial House at Frys. The river had now become coloured and very few pegs were float fishable, I was drawn on peg 2 at Frys and it was an out and feeder job. I fished two lines, one down the middle and the other just a third out. The close line yielded a skimmer, down the middle I had 2 chub but lost another. I managed a similar weight to last week with 5lb 12oz for 5 points, as team we won the day so going well in both leagues. I had a match on the Wednesday at Newbridge, it was the first of a league of Wednesday matches that I had entered. I found myself behind the pumphouse on peg 22 where the river was looking nice, I set up a 1/2 gram pole float for 10 metres out using 20 to 0.09, also a waggler. I had a nice start on the pole feeding maggots and hemp and caught roach steadily, but after 2 hours they shut up shop. The waggler was OK but I got bleaked out. I finished with 10lb 15oz and that was 2nd on the day so a great start to the league.

Saturday 18th and back at Woodlands for the W/L and I was on 34 Back Deans, an end peg. I fished waggler and maggot for most of the match up to a little tree, 7 carp for 21lb was good enough for 2nd in section. Following day and back on the river on the ATWL at Newbridge (back then it didn't seem too much work to fish river one day commy next, it does now!). I was up in the little field on peg 9 and started on a 4AAA waggler catching roach until I got bleaked out, onto the pole to catch roach until I got bleaked out! I spent the last 45 minutes fishing 5m to hand for bleak. I had 9lb 9oz for 2nd in the section, if I recall being beaten from the peg below by Adam Westmacott. Team slipped to 4th on the day.

I had another poor Commercial House match on the 26th October, I drew peg 14 at Swineford and blanked, never had a bite. Only pegs with cover / noted chub pegs caught fish. The last match for me in October 1997 was on the K&A Canal at Limpley Stoke, on the Wednesday league. I drew down the bottom of the straight end peg and was happy with that, Kev Dicks warned me that the day before when he pegged a mass of leaves was a few pegs below. As I set up the leaves were to my left, but no sooner did the match start and the leaves were in and never left, I wish I had a camera back then as it was a joke, I spent more time out of the water than in. To make things worse Des Shipp was on my right and the leaves stopped before him as the wind was holding them back, Des won the match. I managed 5 bites, 5 fish for 5 1/2ozs, a day I wish I could forget.
Posted by Tim Ford at 20:51