I fished this league last year and had a torrid time drawing consistently on poor pegs on Lodge Lake, surely if I fished it again the law of averages would mean I'd draw on Carey or Campbell? Had to travel on my own today due to the fact it is impossible to get both Glenn and my gear in either of our estate cars (its the ready made rods and large stink bags that do it). A nice run down and I was parked by Tony Rixon and Chris Fox, Tony suggested not bothering with a trolley as I'd be on the car park bank of Lodge, grrrr!  My first job at the fishery was to find Viaduct expert Martin Preston. Martin is a Yeovil FC fan, and he bet me a tenner at the start of the season that his lot would finish higher than my Bristol Rovers, it was nice to start the day a tenner up! Martin is a school teacher, but obviously he needs to study the football form a bit more. Thanks for taking the picture Mark Poppleton, I'd been hoping to get this on my blog for a long time. 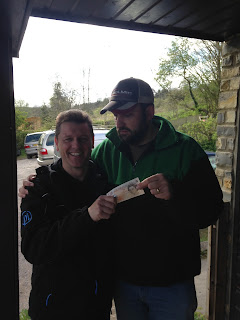 My bright start to the day and smile on my face was soon wiped off when I drew peg 55 on the car park bank on Lodge, Glenn drew just before me and pulled 96 on Carey, he never even spoke to me as he said after he didn't know what to say. Well I was on a poor peg again, not a good draw, and the day before a match was fished on Lodge and it was hard, with Ben Haag not weighing off my peg. All that said I was determined to do the best I could off the peg and started thinking about a plan of attack, I decided to try to catch a decent weight of silvers hoping for the odd carp, and some carp late on. My section ran from peg 53 in the corner where Terry Leahy was, to peg 62. On peg 56 was Steve Seagar who had a face like thunder, and in peg 57 was young Lewis Walker. My view today... 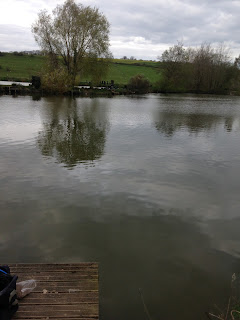 On the all in I fed about 20 pieces of meat at 11m down to my right at the bottom of the shelf, then shipped out the silvers rig to 14m with a 6mm banded pellet and fed lightly with 4mm pellet with a catty. After about 10 mins I had a bite, it was a carp and it felt like a decent fish, my light elastic was going to make landing the fish hard and most it was on the floor out of the pulla bung. I did manage to land the carp, a fish probably of 9lb and a good start. The rest of the first hour though was poor and I only had 2 tiny skimmers and one of maybe 1lb. Terry on my left had already had a few carp on the waggler to the end bank but for the rest of my section it was a struggle.

Going into the second hour I tried the waggler where I had been pinging out a few 6mm pellets, an hour on this produced 2 good skimmers and one spooked carp. Steve next to me had his first fish after 2 hours, and Lewis only had a couple of skimmers, to say it was tough was an under statement.

I tried the meat line at 11m but there was no early signs, I chopped and changed between long pole and waggler but only added a couple of small skimmers, With about 2 1/2 hours to go I went down to the 11m line again and this time the float buried within seconds, I was attached to my second carp of the day. It was another nice common of about 8lb, safely landed I fed a few cubes of meat and dropped the rig in again. Almost a repeat performance and another common was landed. My third drop in also resulted in a carp and this was also landed. Of course just as I had visions of emptying it that was it, time to look elsewhere. The waggler line was no good but there were carp near the surface, I couldn't seem in the ripple but I got liners and spooked them.

With meat seemingly working I fed a new line with some meat at 14m in front, I had been feeding by hand at 5m but I never had a touch here. I took another carp from 11m and missed a bite, but had to rest it again, and for a long period it was dead. The long meat line produce a perch, 3lb bream and a 10lb carp, this was over about an hour when I was looking between here and the 11m line. With 40 mins to go I had another common on the 11m line, and this one had to be 15lb. With 6 decent fish in the net I decided to but another keepnet in, what a tool, that was that I never had another fish but I did miss a couple of bites. I wasn't sure how I had done in the section, but was sure I had been beat by a few.

The match was won by Tony Rixon off peg 116 with 225lb, so I imagine his blog will involved a bit more action that mine has today. I am positive that on the next match I will draw a flyer!
Posted by Tim Ford at 21:34