Midweek Glenn Bailey suggested we fish an open at Viaduct, I was already in as a reserve for Landsend on match lake but decided to keep Glenn company and go to Viaduct as it had been fishing well. That meant doing some more prep, and I really fancied having a crack at the silvers which had been coming out in good numbers. I got some info from Scott Russell who seems to win the silvers every time he turns up and then spent 5 hours over a couple of days making rigs and tying hair rigs and hook lengths.

Glenn and myself had plenty of time to discuss tactics as we saw the Premier League darts in Cardiff on Thursday, we went with my eldest daughter Lucy, Podge and Benz. A good night out. Saturday we  all watched the Gas win 3 nil and the end of season promotion chase is getting tense.

Glenn got us to Viaduct in good time, but due to a bit of chatting we were nearly at the back of the draw queue. The venue had fished well yesterday with Scott catching 85lb of silvers from peg 127, and 14 ton weights. I wasn't very happy when I drew peg 130 on Campbell, this area hasn't been great of late and the carp have been at the other end. However, when sat on my peg getting everything sorted Steve Long said some skimmers had been caught on 129 a couple of weeks ago and he reckoned 30lb was possible of most pegs if fished for all match. My mind was made up now, all out for silvers, no rods, no reels and just the one rig a 4x12 discontinued Preston float, carbon stem and a 1.5mm hollow bristle. This had a 0.128 exceed to a 18 B911 with a bait band on a hair.

I was set up in plenty of time as you can imagine, lol. Took this picture before the start when there wasn't much wind, the angler opposite was fellow blogger Dominic Sullivan. 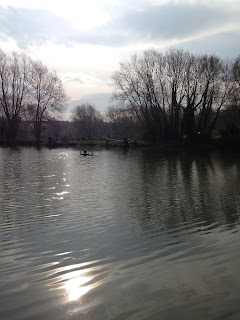 To start the match I shipped out to 14m with a 6mm hard pellet and dropped the rig in, and I fed 4mm pellets with a catapult.  As ever the wind had picked up before the start and it was an effort to get the pellets out to that distance, I wanted to feed a short line by hand but I could not get 4mm out so opted to throw 6mm pellet to about 5m. It was a bit of a slow start for me with just a couple of missed bites and a couple of small fish lost before a 6oz skimmer got me started, After 20 mins I had another skimmer but it was not right, I decided to try a 4mm pellet in the band. This had a positive effect and bites became more frequent with skimmers up to a 1lb and a couple of tench coming in the next 40 minutes. I was glad I hadn't fished for carp as Chris Davis on 132 was emptying his peg, and Roland Lucas on 110 was also catching carp.

Going into the second hour the fishing was good, my only issues were trying to feed the bait in the right area due to the wind, it was in my face but veering off left and right, and trying to see the float. However, I was catching well and it really was like shelling peas at times, though I did get disrupted by a 5lb carp that stretched my black no8 elastic a long way. After netting it I had to shorten the elastic! I found that bites were most positive when the bait was taken on the drop, bites when the bait was on the deck were also hit but I missed more of them. I'd also gone back up to a 6mm in the band and it made no difference to catch rate but I did get the odd 2lb skimmer so stuck with it.

The third hour also went well, but I did hook more carp, landing another and losing a couple. The short line was tried but was unresponsive, not a bite, so I had to stay long. I had been using my clicker to keep tabs on my silvers (first time I've done that) and after 3 1/2 hours I was up to 44lb on it, my silvers had now really gone off the boil and so I decided to put another net in to see what I could get in the next 2 1/2 hours, plus 50lb is the limit on silvers in one net.

I really was struggling now and was hooking more carp, the short line was not working, other than a carp, so I decided to start feeding 4mm pellet on another short line to my left as the wind was not as bad as earlier. I got the odd skimmer out of the blue and another tench long but I was also another 2 hook lengths down. Coming in close on the 4mm fed line the float was static, but just as I was about to go back long I had a 1lb skimmer. In the last hour this was the main line I fished, and although it was slow I had some better skimmers and two more tench, plus a couple of carp. I did try long again but that was carp city, and the anglers either side were catching carp on the pole too after having not much before.

When the all out was called I had 20lb on my clicker for the second net, so 64lb was clicked, but I really wasn't sure I could have that much and wondered if I had over estimated, we would see. Steve Long and Steve Tucker arrived at 132 to weigh in, Chris Davis did well and had 201lb, the lad to my right Craig Cox had 135lb, my turn next and silvers went 65lb 4oz which I was very happy with (also happy to have clicked it so close lol).  My accidental carp went 38lb so I had 103lb 4oz in total.

The match was won by venue expert Phil Cardwell who had a fantastic 271lb from Carey peg 97,

Silvers winner was me (yay) and Mark Wynne was 2nd with 41lb from peg 128 and Dom Sullivan was 3rd with 21lb from peg 111. Glenn just missed out on the silver money coming 4th with 16lb 8oz.

In total there were 21 ton plus weights ( I was the 21st weight!) and this venue continues to impress. What a lovely day out.
Posted by Tim Ford at 21:20