Wasn't sure where to fish this weekend, and was busy as ever. I was toying with going to Hill View but was talked out of it, and instead took on the local venue Windmill fishery. It wasn't going to be great with the forecast of 20 mph wind, so I made sure I had a 10ft tip rod with me.

Woke up Sunday and the sun was shining, but it was chilly out and the breeze was already making me think about adding extra layers. I took a breakfast at the Beefeater which I cannot complain about, but at £8.99 is top heavy on the price. Mike Nicholls, Bela and a young lad called Joe had already finished their breakfast but I had their company for 10 mins. At the fishery the wind wasn't too bad but a draw on the near bank would mean the wind would be mostly off your back. There were two golden pegs drawn out (worth over £100) these were 10 and 24, I didn't draw them and instead got peg 22. This is a nice looking peg with an island and the end of it just to your right, see pic.. 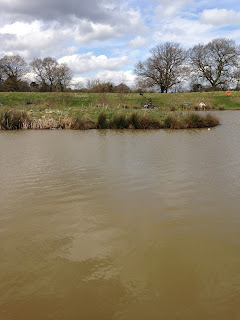 Next the island it is very shallow, and I fished at 14.5m which is a couple of metres short of the island where it was just 2 feet deep. As you can see from the pic fishing the pole would be nice, and I picked two spots with the same depth. I set up a 4x12 PB Carp 2 with 0.15 to 18 PR36 for banded pellet. I set up a 0.4g pencil float for fishing about 4m left and right where I would feed casters one side, and maggot and pellet the other. Just before the start I set up a straight lead with 0.18 to 16 PR38.

The wind had already decided to pick up and I was thinking the pole could be tough, I fed some 4mm pellet via a cad pot on my two 14,5m lines and dropped the rig in with a 6mm pellet in the band. After 45 mins all I had was a couple of missed bites which could have been liners, and the wind was causing my rig to blow through so I had to give it up. A quick look on the short pole lines with double maggot and I had two 4oz carp, a couple of rudd and a carp of 12oz. Both lines then went stone dead and so I picked up the lead rod and put a Sonubaits Bandum in the band. I under armed the lead onto one of my 14.5m lines, and in less than 5 mins the rod bent round with a carp heading off along the island. It was no match for the gear I was using though and after a short fight a 5lb common popped up and into the net.  Another chuck on the same line produced nothing at all, so off to the other fed line towards the end of the island. I was feeding my inside lines when the rod nearly went in!  Another spirited fight and this time a 4lb mirror carp was safely netted.

At this point it becomes very difficult to write anything more! The wind got worse, even the tip rod was being buffeted around, feeding my short lines by hand was more hit and miss as the gusts made it hard to throw it accurately. I never had another carp all match, the lead rod never went round again, well it did once but it was a male mallard which I played from 10 metres above me in the sky all the way to the bank. The lad next to me grabbed Donald and we removed the hook from his now flaccid looking tongue. He flew off and seemed no worse for his experience.

All I could see happening was people at either end of the lake getting a few carp, whilst those around me caught none. I tried a method feeder with gbait in to see if I could stimulate some activity, and I did get a few liners but never a bite. In the end I packed up with 30 mins to go as I couldn't get a bite for love nor money. In fact the guys around me had not had a carp, including Dave Wilmott on Golden peg 24, he ended with 1 roach, this after winning the last match here.

I left before the end so did not get the results, but Mike Nicholls will of course have all the info on his blog. Right time to settle down and watch the golf with a cup of tea.
Posted by Tim Ford at 19:18