Didn't have a particularly good week, my nan died (although she was the grand old age of 90) and then had what I think was heart palpitations on Wednesday night. They had a weird effect on me and Thursday at work I found myself carted off by ambulance to Southmead hospital. There was no serious issue, and might just be down to a virus or a one off,I still felt like I'd been hit by a bus though.

Thanks to Lee Trivett who collected my bait on Saturday, and that meant I was not under any pressure and even had time to have a couple of beers to celebrate Glenn's birthday. I woke up Sunday and other than tired I felt well, I honestly didn't know where I wanted to draw, but Swineford or Jack Whites would probably be good, as well as the noted bream pegs at Newbridge. Sadly I got neither and ended up down the trees at Newbridge, just about the one area I thought would be very hard to frame from. Trevor Chalk was down to fish this match and he drew on 115 not great on a day like to day. The river was still clear and without much flow, quite amazing that the rain we had hardly had an effect. Some idiot/s had ripped out most of the pegs so we did our best to work it out, my peg was still in, but in my opinion it was unfishable with this tree right over my head. I can only assume Mr Magoo  put this in. 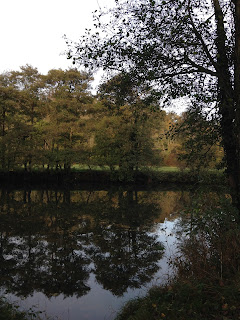 With the next angler above me having a lot of room he agreed I could move 5 yards up where I smashed down nettles, brambles etc to get to the river and fish from about 5 foot off the water. It looked a bit like this, at least I could get the 5 sections of pole up in the air that I would need to fish this deep peg. 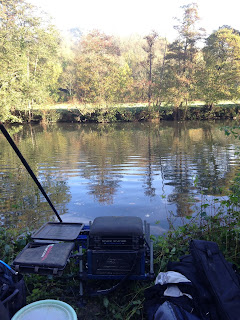 When the all in was called I cast out 8 feeders full of gbait, worm and caster 3/4 across, then fed 12 balls of gbait on my 13m pole line. I started on the pencil rig with a single maggot and three small roach in three chucks, I tried the heavier rig with caster and never had a bite. Back to the pencil rig and with a single maggot I had a bite every run through from 1oz roach. I had the odd small perch and one or two 3-4oz roach. It was though an absolute nightmare to fish, with lots of rowing boats that were all over the river, and some who were effing useless. Shipping back was also tricky as there were a great many walkers, dog walkers and people watching the rowers. It was like Picadilly circus and I kept repeating to myself keep calm, keep calm. I did have one outburst at a four, more out of frustration really, but bit my tongue for the rest of the day. 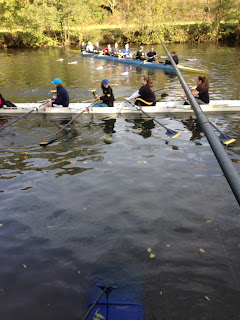 Back to the fishing and I caught on and off for the first two hours but the fish were very small and so I thought I had about 2 1/2lb. I had a look on the gbait feeder but that was no good at all, the angler above me came down and said he about 12oz and above him was worse. That was how I expected it to be, and I thought I would do my best to enjoy my day on the pole.  Back on the pole and it was much harder so I cupped a ball in, this helped and a few more roach came out, I also had a few right down the peg probably just below my loose feed. Another top up ball had a positive effect and I had a couple of 6oz roach and a 8oz hybrid, I thought this might see the fishing improve, but another ball did not work and it really died on me. I chucked the feeder again for 30 mins, but other than a quick rap I had nothing.

With about an hour to go I just kept working hard on the pole, trying different hook baits, though fluro maggot was by far the best, and messing around with the loose feed and gbait. I managed a few little chublets and another 6oz roach on a caster on the heavy rig, but the pencil rig took everything else. When the all out was called I thought I had 5 to 6lb, and to be fair I was pleased with that as I had thought it could have been a lot worse.

The scales had to weigh in from the end peg where Derek Coles had drawn, he had the top weight in that section with 8lb 10oz, and there were a couple of 7lbs, then it got worse with a couple of 3lbs. Then in my 5 peg section I weighed in 6lb 14oz and that won the section money, mainly due to the fact that everyone else chucked back! The next section above me was won with 4lb 13oz, and it was definitely not a good area to draw.

Back at the results and the banter was flowing well with Ray Bazely running proceedings and generally taking the mic. It was apparent the river had fished hard, but there were still some decent catches. Ray had got a new trophy for this match, and he did a very nice gesture by presenting the old cup (which I had won three times) to me to keep, thank you very much Ray!

Well done to Terry, sadly he doesn't do the pools so Towner cleaned up, he might buy a beer next week.

Couple of pics of Terry, and even though he didn't get any dosh he has his name on the cup. He actually approached me before the match to say he reads my blog and likes it because I fish the rivers. He told me what peg he had drawn and I said if was on it I'd go for bream, so perhaps I had a little hand in his success, good on you Terry, well done indeed. 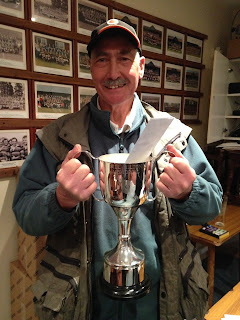 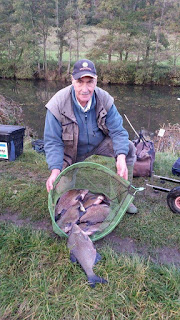 Canal at Bath next week, best get some rigs and bread sorted out then!
Posted by Tim Ford at 20:12