ATWL - Bristol Avon Keynsham - Round one

I knew I would feel tired Sunday morning, but I hoped a breakfast and cuppa would perk me up. Meeting up at the Crown in Keynsham it was not long before the draw would commence. There were four sections at Swineford, three on the Crane and one at Jack Whites. Andy Ottaway and Lee Trivett had pegged it and done some serious swim clearing on pegs 17 and the gas pipe. When the team draw was done I could not believe it when Lee drew 17 and Andy the Gas Pipe! Myself I was going for the long walk up to the Beach at Swineford.

I walked along the cycle track with Shaun Townsend who was on peg 29 in the other section, it was a good workout.I finally got to my peg with less than an hour to get ready. I'd forgotten my waders so was lucky that Andy Britt could lend me his, thanks mate. All I had time to set up was a 2g pole rig with 20 to 0.10 a 4g flat float with 18 to 0.12, and a waggler with 20 to 0.12. It was an awkward peg for sishing a pole but there was a nasty downstream wind which ruled out the crowquill, plus there have been skimmers showing in the area and I thought the pole would be best for them. Before I go any further I was surprised to see Dave Stiff on the peg below me, end peg. Surprised because he had walked up from the Crane, can't believe a bloke who lives on a boat doesn't know where to walk from lol!!!

On the all in I threw 8 balls of gbait in, I had worms, casters and hemp in the balls. I loosefed maggots and hemp further out and down for the waggler line. I began on the 2g rig, the first half dozen runs through were a little disconcerting as I only had 1 small roach and dace. I was expecting decent roach on caster, but it wasn't happening. Then about 30 mins I had a 6oz roach, next drop in another good fish but this appeared to come off on the way back I thought. Next chuck another but pike took it. Soon after another pike took a fish and snapped me. New hook length lasted all of a couple minutes as pike did me again. I then bumped a decent fish and quite frankly everything was going wrong. I did manage to land a couple of 6oz skimmers and after the first hour had about 2lb.

Going into the second hour I was playing the pike again, this time it stayed on for a while and eventually it swam into the reeds under my feet and I lost the whole rig, oh you pig I think I said... I attached another 2g rig and soon was back in action, but bites were almost non existent and I guessed the pike had unsettled the fish. Out on the wagg for a bit, it wasn't great but I did have a couple of 3oz chub and dace and bleak. I kept thinking though I needed skimmers as I thought my section would be won with 15lb+, so out with pole again. Over the next two hours I never had any pike trouble, yippee, and by feeding casters and topping up with the odd food rich ball of bait I caught the odd small skimmer and some roach. I only had 3 skimmers on the flat float, but the 2g rig fished a little over depth with either maggot or caster was by far the best.

Going into the last hour the skimmers seemed to have had enough, and I worked hard with the waggler and pole to catch roach, the waggler was better as it avoided the pike which had returned!

With the match over I was knackered, throwing the pole up behind me, and having to stand up to it every time was hard work, but I knew I had a decent net and hoped I had 15lb. Once I had finally packed up I had to weigh in as I had the scales, we started with Dave and he had 9lb 8oz which included a brea, of 3 1/2lb, nice one Dave. My turn next and I was pleased to see the scales record 17lb 10oz. Jeff Surmon above me had 11lb 8oz, then Andy 8lb 7oz, and last Shane Caswell on Bitton Brook had 8lb 10oz.  Section win for me and job done, so it would make the walk back a little easier.

Mike Kent had taken a walk on the river and he took this photo of my catch. 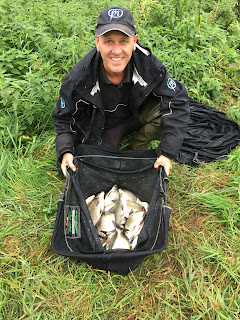 Finally back to the pub and I was wet through from sweat so glad of a Thatchers Gold to cool down. It soon transpired the team had done really well and we won on the day with 36 points out of 40, Bathampton were second.

The Crane was poor today with everyone having pike problems and 10lb the best weight I think.

I think I had enough fish on the hook today to come 2nd, but everyone had pike trouble and lost some fish, Lee lost 3 big chub for example. First hour was a nightmare, but after that things got better and it was a lovely day catching on the pole, and catching small skimmers is great fun.

Round two at Newbridge next week.
Posted by Tim Ford at 20:48