Thanks to social media I was able to order some bait via Facebook messenger with Matt Challenger whilst I was working in Munich this week. It is not conducive for match prep to be working away so much and then watching Rovers on a Saturday. However, you only get one chance on this planet so I like to fill my days as much as possible whilst I'm fit and healthy. I was worried about my participation Sunday as Friday and Saturday I had a bad back and was struggling badly, thankfully it improved enough that I could get my gear into the car Sunday morning without too much pain.

I was slow getting to the draw so I didn't have time for breakfast, and before long the draw was underway and I was hoping for a peg at Swineford or Jackie Whites. Thanks to Mark Harper I got my wish and was on peg 27 at Swineford, and that meant another long walk along the cycle track, it takes me about 20 minutes. Our team was struggling for anglers and I had managed to get Andy Curry to fish for us, he probably was regretting saying yes to helping after he was given a peg at Frys lol.

Right, finally at the peg and soaked with sweat, as was Martin Barrett on peg 29. I was happy with the peg as it usually holds plenty of roach and sometimes the odd skimmer, but in this section there are some great pegs and 15lb has to be the target to do well. It is comfortable peg once you are down in it, but really not good for the pole with a high bank immediately behind you, so all rods for me today. 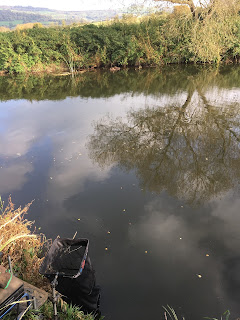 The river is really clear at the moment and does not have much flow, I really felt a peg with chub on would be better than roach today. My peg has most of the flow from about 7m to half way across and so this would be my main attack.

The question for me was to use gbait or to loose feed, and in the end I went with just loose feeding due to the clear water and long trot I had. I began on the Bolo but it wasn't quite right to me and bites were not positive so I switched to the stick float and was soon getting a bite most casts, trouble was I was either missing them or catching 1/2oz fish. It was not the start I'd hoped for but when loose feeding the swim can improve so I persevered and upped the caster and hemp feed. The first hour wasn't great, and I was a long way behind Martin. I switched back to the bolo on my 18 foot rod and bites were better but the fish were still small. There were clearly plenty of small fish in the peg, and the bait was being picked up on the drop forcing me to shallow up a few times.

In the second hour I picked up my two best fish, both roach at about 6oz. I was catching best on a bronze maggot on the hook, caster did not produce better fish at all. I tried a tare a few times today, but again I only caught a couple of small fish and often had fast unhittable bites which I think might have been from dace which I had on and off.

Halfway through and I don't think I had 4lb in the net so not going well. Glenn rang me, he was for the second match running on the fence peg at Jackies which is solid with dace and he was bagging. Every time I tried to up the feed to feed off the bits my bites would slow right down, and I just got the feeling the bigger stamp of roach were not feeding. Then to make matters worse I managed to catch the tree on the strike and snapped off below the bolo. I could not fish the stick as the wind was to strong upstream and so I had to set up again. At first it seemed the rig was not working as well as before, however, things improved and the last two hours the roach were better and I could get runs of 2oz roach but after three on the trot you would be back to tiddlers. I started to feed maggots heavily over where there was not much flow, but did pick up a few roach here. It was a case though of casting around the peg to try to find those slightly better fish before they moved again. The last 90 minutes I reckon I caught most of my fish actually away from the feed, and this was something many people experienced.

Match over and I thought I had about 9lb which I expected to only beat a couple of people today. Sam Johnson had a nice walk to weigh the section in, and when he got to Martin 26lb was top and 10lb was next. Martin had 13lb+ , he had fed a bit of gbait but had managed a dozen chublets across which was worth a couple of pounds at least, I'd not seen one of them. My turn and I was a little surprised to see 11lb 4oz on the scales, "a lot of fish" was the comment, and on another day with better quality it would have been 20lb, but if's, but's and maybe's....

Paul Isaacs had won our section from Bitton Brook, he had 6 decent chub and lots of dace, roach, bleak and chublets, a busy day and well done him. Martin was 2nd and I was 3rd in the A division.

The long walk back but at least the sun was shining and it was such a pleasant day weather wise. Back at the results and I soon found out some parts of the river had fished very hard, and most of the river was below par today, the exception being Jack Whites which was superb.

In the A div Thatchers B were first and Thatchers A second, and after three rounds these two teams are 1st and 2nd respectively.

In the B div Maver are leading Stand and Deliver. But in both divisions it is still quite tight and all to play for.

Next week it is the same venue (less Frys) for the third round of the ATWL, and unless there is a decent amount of rain then we can all look forward to a tough match, unless you can draw bunghole pegs lol.
Posted by Tim Ford at 20:33