The blog is back after I spent a great week on holiday in Zante, loved it and so glad I went. It was a busy week for me and with this match on the Saturday and the first round of the winter league on the Sunday I had to use Friday afternoon / evening to do all my prep. Not easy to get all my gear organised for a day on carp and then the river, but it has to be done.

Met up Saturday morning in Cannards Well with Mike Nicholls and Glenn Bailey, bit early for my liking but meant we had brekky in double quick time. Once at the Viaduct there were plenty of winners already there, and the talk was you needed to draw Campbell lake to win the £1000 prize. 67 anglers were fishing and as well as Campbell, Carey, Lodge and Match lake were all in, even if you drew poor there was £65 for winning your 5 peg section. Into the draw queue and I had two of the best draw bags in front of me, Des Shipp and Andy Power, not bad anglers either lol. I just hoped I could get a flyer on Campbell as that was going to be my best hope of getting in the frame against tall the regulars and very good anglers. I pulled out 117 on Campbell, happy days. It is a peg not used in most matches as it is set back and hemmed in, and 116 and 118 usually catch in the edge back towards it. 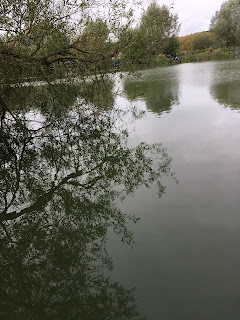 When the match began I started at 8m right in front with meat looking for a mug fish, no bites here at all sadly so I moved to the same distance but next to the tree with meat. One skimmer was all I had from there so not a good start but Dave Romaine on 118 was fishless and not much was happening. I was feeding a few 8mm pellets with the catty out for the lead so went on that. It didn't take too long for me to get a little 3lb carp, and about 20 mins later another of the same size. An hour gone and that was all I had, but it was more than my neighbours,

The next hour went passed without any action, and the third hour was also poor until a few carp started to show themselves out in front. I had a few on the lead but again only small fish, but at least I was getting a few liners and indications at last even if the carp were still hard to catch. With about 90 minutes to go I had 9 carp for 40lb, Dave was still struggling but then had a carp on meat, I had tried the tree and margin lines without a sign, but I saw a few bubbles by the tree. Out with the rig and within no time I was attached to carp, I had to give it some stick because the branches, but it came out and was about 5lb. Back out in again fed a bit of meat and another carp, about 8lb this time. Typical of carp these days, they were coming on the feed and coming in closer late on. I couldn't absolutely empty it but I did at least manage to put another 7 carp in the net from this line, I lost two I think, one was definitely a fouler. I tried the margin to the right with pellet and hooked one, but despite me pulling hard the scrapper did me in the brambles.

Match over, it was certainly a bit tough where I was and from what I could tell I was looking good for a section win. In the end only one other angler weighed in my section, on 116 and he had 65lb, 115, Dave on 118 and Nick Ewers on 119 all chucked back. I weighed 100lb 10oz so was happy enough with that and it was nice to finish my commercial fishing off with a ton.

I had to shoot off straight away as I had a work do to attend, a good night playing skittles, so I missed the full results but I do know that Andy Power won the match from peg 129 with over 200lb. He'd have probably won it from my peg too.