Well after last week's match I was sick as a pig and didn't go into work on the Monday, it turned into a hacking cough which kept me and the wife awake most nights. That's the sob sorry done. Made some rigs up, tied some hooks and mixed my groundbait Saturday morning and felt well prepared.

I did have a few drinks Saturday, mainly Jameson whiskey which I hoped might numb my sore throat, and I did sleep better, still woke up early with the clocks going back lol. Off to the draw and once again it was a nice breakfast at the Crown in Keynsham. Whilst eating there was a debate as to who would draw for our team, and in the end "Lucky" Lee Trevitt volunteered. When he came back with the pegs he had drawn a few good ones, he was end peg in the trees, Luke Sorokin was on 50, and I was on peg 3 in the little field.

I got to my peg and was knackered, couldn't believe how hard I found the walk, but guess that's the lurgy. Peg 3 is the upstream peg and back in the summer it held a lot of skimmers, but in the winter leagues the skimmers have not shown and pike have been a pain. 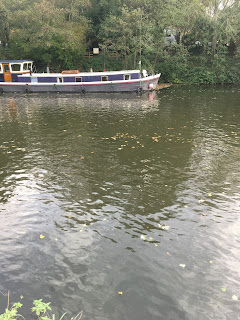 I was positive about the peg and therefore I made up 12 balls of gbait which held 1/2 pint of caster, 1/2 pint of hemp and a good helping of pinkies. I threw them in at 13m, I'd normally only go to 11m but thought an extra section might give me a better chance of skimmers, though I wasn't expecting to see any of them till later on. I began on the 2g rig with single caster on the hook, missed a bite and then had a roach, then another roach, then a third which a pike took, new hook required. Back in and I was getting bites but not hitting them all, and then had another pike take take a fish, this one stayed on a bit and in the end I got the bloody thing in, about 3lb. 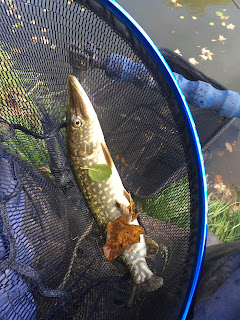 Back in and still a bite every drop in from small roach, but I didn't feel I was hitting enough bites so switched to the pencil float. This was a good move and I definitely hit more bites, but I had to shallow up and was about 1 foot off the bottom and still getting bites on the drop. Surprising really as at this stage I was not loose feeding, just plopping the odd ball of my mix. Another pike put in an appearance, this one was a double and it forced me off the pole onto the bolo. I was able to get bites on this but fish to bite ratio was poor, but fish hooked and landed ratio was better!  After a while I decided I was missing to many bites and went back on the pole, a good move as I had a couple of 4oz roach when the pike got me again, and again and I had enough and went for a walk to Ivan Currie on peg 7, he was suffering pike strikes to and generally fed up.

I went back and began loose feeding heavily with hemp and caster, I was worried that bleak might come in, but as it was they never did, I had 20 mins without a pike attack and then I had one on proper. I played it for 5 to 10 mins, and really gave it some stick, I actually had it in the net but it wasn't all in and got out, think it was getting on for 12 to 14lb. Anyway it decided to go down stream and eventually the line parted, but I was amazed how far it went before the 0.10 broke.

Giving that pike a bit of a headache seemed to improve things and I had a good 30 mins on the pole fishing shorter at 11m catching small roach, eventually of course a pike fecked this too. A dingy went past me with three rather unpleasant lads in it who were piking, just as they got past my peg they had one, a double, how many of these feckers are in here I thought.

The last 90 mins were still a bite a chuck, I had tried the flat float on and off but only caught the same size roach or a little perch, it was clear to me the peg was full of roach and pike. A very large pike emerged during this time, it was huge, I saw it a numbers of times go for my fish, but I think it was too big to be really fast. There were still other pike in the peg, as I lost 2 on the bolo which were clearly not big pike. Eventually the leviathan got me, and I was never going to win any battles with this one so just pulled hard until I snapped. 10 mins to go I hooked it again, and then tied on my last pre tied hook length. Caught a few more roach and that was it.

I cannot say it was a lovely day's fishing, but it was a bite every single run through, I honestly think without pike trouble there was a chance of getting near 20lb of roach. Dean Harvey who was on his usual peg 16 came up with the scales and weighed me first, I was still packing away so wouldn't get to see the others weigh in. My roach went 13lb 14oz, a little less than I hoped, guess the fish were not as big as I thought. Once I packed up I met the lads below the bridge but everyone had weighed in. The weights in my section are show below, Dean had small skimmers on the pole and feeder, and two 6lb bream in two casts on the feeder. 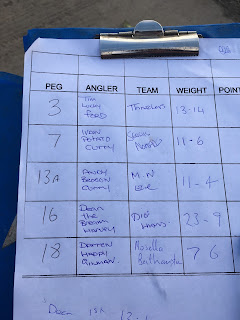 Back to the results and it was soon evident that the river had fished well today, pike had been a pain for many, but for the first time bream had shown in some areas. There were 24 double figure weights today and every section was won with double figures, see below where you can see 1st and section weight in each section, not bad fishing. 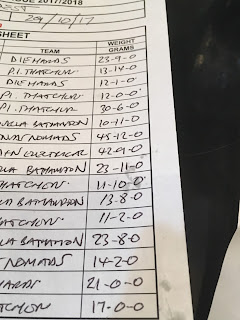 Thatchers managed to win on the day with 29 points, Bathampton 27 and Die Hards 26. League overall is now Thatchers one point ahead of ahead of Bathampton. There are two matches left on the K&A canal next week is up at Melksham, I'm dropped for that so weekend off for me, so next match is the Poppy.
Posted by Tim Ford at 20:02