Some time ago I received a message from Bob Gullick asking if I would like to fish a match at Sedges to celebrate his 50th birthday. It was to be a silvers match on Brick Lake and with a free brekkie and tea and cake thrown in how could I refuse!

Got to say I have not been feeling to well this week and when I awoke 5:30 Saturday morning and heard the howling wind and sleet I was thinking I really would rather stay in bed. However, it would be poor show to let Bob down so I got on with it and put on lots of extra layers. As soon as I started to load the car I knew winter had arrived, gloves and woolly hat were also needed.


Here's a picture of Bob and his birthday cake which tasted very nice. 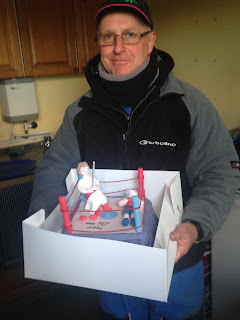 Bob and the 19 invited anglers all met in Parkway Cafe in Bridgwater, there were loads of drawbags and great silvers anglers in there. I had a nice breakfast and most people went for the normal size, but Dom Sullivan had the large and it was a big un!!!  At the fishery and the cold Northerly was hammering down the lake, pegs 6 to 10 and 11 and 12 looked the calmest, with the other end and especially 18 to 20 looking really rough. I pulled out peg 3 which I didn't fancy one bit, the skimmers aren't usually here in numbers and the wind would make life very awkward, but with £40 for the 4 peg section it was worth a shot. My section was Russ Peck on peg 2, Alan Oram on peg 4 and Dom Sullivan was on peg 5 and I thought he was favourite.


When the hooter went to start I fed some micros at 11mm, 3 balls of gbait at 13m and then cast the feeder out with double maggot on the hook. It was a slow start for me, but Dom had an early small skimmer and over on 17 Gary O'Shea had a tench first cast on the tip. After about 25 mins I snared a 1oz roach on the tip and I did miss another bite probably from a roach. After 40 mins I had no more so picked up the pole and tried a soft pellet over the micros, nothing, not a bite. Right onto a red maggot on the hook, a bite and a little 2oz skimmer which I tried to swing and the wind blew it off the hook. Over the 13m line and nothing not a bite. Back over the micros and I had a tiny roach  but nothing else,

Nicky Ewers on peg 1 had 2 skimmers on the tip, and although Russ and Alan were biteless on it I decided to give it another go. It was more difficult to cast precisely as the wind was getting stronger so bad casts had to be retrieved, but when I landed on the spot within a couple of minutes I had a positive bite and struck. There was a decent fish attached but not a skimmer, probably a bloody carp, but as there was £20 for the top carp weight I played it carefully. When the fish popped up and I saw it was a tench I was dead happy, and in the net it went. Next chuck and the tip flies round again, another tench? Not this time sadly, it was a carp. I played it carefully and it came in slowly but then decided it wanted to see Alan Oram and soon after the hook length parted. That knocked the feeder on the head and I rested it again.

Back on the pole and everything was rock hard, I had to go well over depth as the trip was bad. A little roach and a tiny skimmer from the micro line and nothing from the gbait line, in fact I never had a bite at 13m so no more of that! Alan then had a decent skimmer on the pole and lost a carp. At this stage I was winning our section.

The rest of the match was rock hard, Alan got an eel and was close to my weight, Dom fouled a skimmer and was also close. All I managed was another little skimmer and a rudd on the feeder, and a couple more tiny fish on the pole with pinkie. To be honest I was really getting cold and couldn't wait for the end of the match to come. At the all out it was clear it had been a struggle for all.

The silvers winner was local ace Eric Fouracer who had 3 bream on the feeder for 8lb+, just beating Matty Toomes who had just a few decent skimmers on the pole. Accidental (not so accidental) carp winner was Ken Rayner with 6 carp on the lead for 40lb. Ken was on peg 19 and chucked into peg 20 as Dave Roper never bothered to fish the peg. It was good to warm up with a cup of tea and a piece of Bob's birthday cake, and Bob had won his section (4 corners of lake) so had some birthday money. I did ask Bob if he could move his birthday to July as it would have been a bit warmer lol! Thanks for the invite Bob, I hope you enjoyed your birthday.

Fishing again tomorrow the Commercial House on the canal up at Bath, hope I get a lot more bites tomorrow!
Posted by Tim Ford at 19:42