Looking forward to this match, as ever, but the rain forecast could mess it up. In the end the river was looking great Saturday but the rain we had early Saturday morning was really heavy and pushed the river up and coloured. That meant minimal preparation which was dead handy as I was very hungover after a night out with lads (Thatchers Gold and Jaeger Bombs were not a good idea) and all I needed was to defrost my groundbait.

Sunday morning I was feeling fine and got to the draw where I saw Andrew Chatterley and Steve Nadin who were up from Dorset, must be 20 years since I've seen Chats! There were plenty of other anglers who I only see on this match and it is always good to see them. After our 2 minutes silence the draw began, I was hoping to pull a peg at Newbridge and I got my wish when I found I was going to be spending 5 hours on peg 77 which is 3 below Newton St Loe bridge. It was so mild as I walked to my peg I had to remove clothing. My first glance of the river by the arch and it was dirty and pushing through, but not that bad that you'd have to fish right in close. As I walked along with Jeff Surmon we spotted a few bags of gbait on the floor that had been dropped, it turned out to be Trevor Chalk's bait, Trevor is normally to be found fishing the river Wye.

Finally arrived at my peg and decided to fish from the top of the bank, on my right was Steve Skelton and on my left Martin Reyat. Looking at the river I thought a flat float might work, but I hadn't brought any with me. Then I remembered this was an open match, be positive, so it was 2 feeder rods to be fished down the middle. One feeder rod had a 14 PR355 to 0.165, and the other rod a 12 PR355 to 0.165. 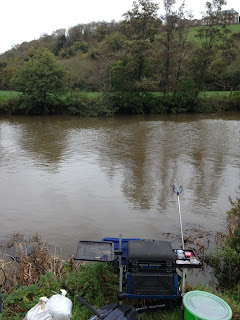 As I was setting up I saw an angler pushing his gear down from the bridge, it was Alan Jones (who is getting on a bit) and he had walked from the pumphouse by mistake and had to go to peg 90 on the stream. A bad mistake to walk 70 pegs to that peg lol! I also heard another angler left his seat box in the car park whilst he drove to the Crane, that made me laugh. I did set up a bleak rig as I was on a peg which caught some last week, and thinking that 10lb would be a good weight today bleak would be handy. I was just ready for the start, and I threw 8 jaffas stuffed with worm and caster out to about halfway and followed them in with the feeder. The first 30 minutes were dead and then I had a bite which I missed, but the very next cast I had a small eel. I was trying different hook baits out and the eel had come to a dendra with red maggots, not long after an 8oz roach also took the same bait.

After an hour I had added a small roach and then had a rattler of bite and had another eel of around 8oz. This eel had swallowed the bait deeply and after a quick try with the slamo I decided to cut the line, as I did the eel had managed to make a hole in a new landing net and slipped through it back into the river, balls! As I had to tie another hook on I decided to have a cast out with the bigger hook and try a lobworm tail. Not long after tying the new hook on I had a bite on the lobby but missed it, try again and another 8oz roach. No more bites on the lobworm followed so I went back to the smaller hook and had a chub of about 6oz. It was about now that organisers Paul Benson and Ray Bazely met behind my peg. Benz said I was doing OK, but Ray had seen a bream caught by Jan Mazyk who was on the bream hole peg.

During the next 2 hours I would get odd bites from roach, I never saw another eel, but these bites are bloody hard to hit despite fishing for drop backs. I think the bigger roach are easier to hook than the smaller ones, and as I really wanted to catch a bream I did not scale down to catch small roach. A dendra with 2 casters was good for another few roach, mostly netters. I kept piling the worms and casters in through the feeder hoping to attract the aforementioned bream but there was no sign of any in my peg or around me. Warren Bates had drawn well again and was on the peg which won the match last week, Warren was struggling and went for a walk, when he returned he caught a bream on his first cast, nice. Sadly my peg seemed to be going downhill with the fish getting smaller, to prove a point I put 3 red maggots on and caught a dace and my smallest roach. Sod that. Tried the lobworm again and had 1 roach on it, but the last hour was not good for me and even though I kept the faith the bream did not show up and I was not going to be winning this year.

In this match they pay money out on every 5 pegs, I thought I had about 3 1/2 to 4lb. Jeff and Martin had a lot more fish than me so it was not looking good even for £20. The section above the bridge was won by Glenn Bailey with 5lb 12oz, Jeff had just under 4lb, then I weighed 5lb 2oz which caused much cursing and foul language to appear from Martin. He needen't have worried as he did me by 3oz, and yes I was now cursing losing that bloody eel lol! Just seems not to be my year on the rivers, not won a bean and I cannot rememember that happening before, I've got one more chance in two weeks to avoid the white wash.

Back at the results word started to come in of bream that had been caught and it wasn't many. Also a couple of anglers had lost a lot of eels as they had holes in their keepnets, one was my teammate Nick Chedzoy, he lost 15 of 17 eels, plonker!! In the end the winner was Jan Mazyk who had 4 bream for 24lb 6oz, well done!!!

In second and next to the winner was Dereck Coles who had 14lb 12oz which included a 9lb 10oz bream, wow!!!

In third and a previous winner was Andy Ottoway who had a really good net of roach and eels for 12lb 6oz, he just beat Warren Bates who framed for about the 4th match on the trot with bream and is doing really well. The top 4 all came from Newbridge and you can see below the top weights. 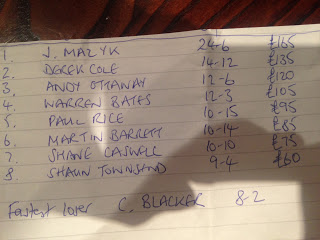 As usual the results were full of fun and banter as Ray is the king of wind up. I managed to win something, a tin of biscuits on the raffle lol, but Glenn won a rod so he had a good day. John Smith got the biggest laughs as he kept coming up to claim raffle prizes only to have the right number but the wrong colour! At the end of the day Ray and Benz and their helpers did a great job, and advised they are getting a new trophy for next year as they will make it the Bill Milton memorial trophy. Bill was an avid supporter of the Poppy match and it is a nice touch, now I just need to get my name on that trophy!

Not sure what to do next week, if the river looks good I might fish it for fun, or I might sneak on to a carp match.
Posted by Tim Ford at 20:40