It was positively warm Sunday morning without the strong northerly wind, OK it was cold and there was ice on my car but it was still warmer than yesterday. Got to the draw with a bit of time to spare today and so had an egg & sausage bap whilst chatting to the lads. Plenty of ringers in today, with Dave Stiff, Paul Barnfield, Chris Ollis (yes really) and a young lad called Andrew Cranston (look out for him one for the future).

There was no bloodworm allowed today because this match was supposed to be on the river, but on Weds it was decided to put it on the canal. After seeing how hard everywhere fished yesterday I was thinking today could be a toughie unless you drew well. Team draw was done by Mark Harper, and he put himself on a great peg, one past the swingbridge up past Bathampton bend. I was in D section at Meadow Farm, and had 3 end pegs in the section so was up against it. Got to the canal and Rich Candy is on the flyer on the Bath side of the bridge, Tony Gilbert on the flyer t'other side of the bridge. Andy Britt was on 7, and I was on 8 with Martin Reyatt was on the end peg of our section on 9. Andy was gutted and said we were in the worst bit, it was narrow here only 10m wide, meanwhile Martin had a lovely bit of decking to fish up against and I fully expected him to beat me. Any said he though Vinny Lunn would win the match, I made a counter prediction that Mark Harper would win, and also that I'd get 1 point!  My peg below, with the sun in my face. 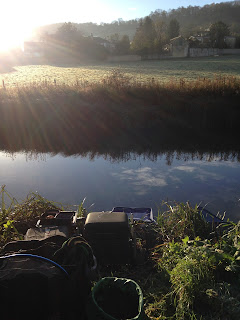 Just before the start Martin wandered down and had a pee behind me, there was a tree swing cut back in and so it was a safe place to pee. As soon as Martin vacated I took my turn to empty my bladder, but (I blame it on my woolly hat) I turned round the wrong way and smacked my head into a tree. Ouch, it hurt, really hurt and soon after I had a small egg size lump appear, plonker! Never mind if I can see two floats I might do better.... I shout the all in, cup in a decent ball of bread just past 4m, and some worms down to a boat, then a few casters were potted across. I started positive with an 8mm punch and lowered the rig in, it drifted to the right with the tow and didn't dip. I lifted it out and repeated the process, and did it again, 3 drops with the same punch no indication. I dropped the rig in above where I cupped my bread in and as the float was settling it shot under, my strike was met with firm resistance, skimmer. I held the pole and very slowly shipped back, by the amount of no4 elastic out this was a decent fish. I broke down to the top 2, turned to get my landing net, looked back to the water and saw a 2lb fish below my top set. I then saw my rig fly up in the air and the 2lb skimmer laid flat for a second or two as if to say "look at what you could have won" and then twitched and swam off. I did shout out in anger, think it was the lump on my head made me do it.  Never mind where there is one skimmer there is sure to be...... none! That was it, not another bite, and I mean not another bite on small punch or anything.

Thirty mins in and I fed a cup of bread 9m up the canal on the same depth, this was a good move in that it avoided the blank, I took a 1oz roach and 7 pairs of eyes, and after an hour that was it. I got up for a walk, Martin only had 6 fish and was struggling like me, but to my right Andy and Mat Challenger had skimmers and the other anglers had roach and small skimmers. I was 3lb to 4lb behind already. Now when you can't get a bite and you've not got b&j and you're 3lb behind big fish are probably all that will claw it back. I tried my worm line and caster lines all to no avail, also biteless. I was loose feeding a few casters to another part of the far bank and I did get a dink there but no more.

Feeling bored, fed up and with a muzzy head (not helped by staring into the sun) I decided to put bread in against the far bank and use my 4x12 rig with punch. This was a good switch as I could get a bite a chuck here from five to the ounce roach!!!! I tried a bigger punch and that was no good at all, a 2mm punch was the only way to get a bite. I fed 2 chopped worm swims way off to the left and right, one fed heavier than the other in the hope of nailing a perch. Back to the bread across for more pairs of eyes. I settled into a rhythm, catch 10 see through roach and then have 15 mins looking for a perch. I did manage a 4oz perch on my caster line, a 4oz perch on the worm, and managed to foul a 2oz perch in the dorsal fin. That was how my match panned out and I knew I was beat up.

Martin had managed to catch a dozen perch against the decking and was glad he had them, 4lb 6oz, My sprats went 2lb 1oz. I was chip shop sausage when Andy Britt put 4lb 1oz on the scales and then Matt won the section with 4lb 15oz of skimmers. Matt told me he hardly had a fish after the first 25 mins!!! Sadly my prediction came true and I had 1 point for the team, I did beat 2 in the B div but that was scant consolation. Even Rich Candy on his flyer managed to beat me and he packed up 1 hour early getting the time mixed up, PMSL!!!

I also got my other prediction correct with Mark Harper winning with 11lb 12oz of mainly roach up to 12oz on bread then casters, a lovely net of fish there. 2nd was that excellent angler Paul Purchase with 6lb 8oz, young Andrew Cranston came 3rd with 6lb 6oz, Mike Kent 34th from Darlington with 6lb 4oz. Bathampton won on the day and now lead the league with the next two matches being on the canal in 2016.

What a shite league I have had so far, it is by far my worst since, well I cannot even remember lol! My day got even better when I got home to find the electrics in my shed weren't working despite no fuses or trip switches blown, so I fumbled around in the dark and managed to trip up over my trolley. Feck me what a day.

Next week back on the canal for the last ATWL with B&J.
Posted by Tim Ford at 20:17