Not fishing the winter league today meant I had to chose where to fish, and my original thought was to pleasure fish the river. Of course the rain that fell during the week and especially on Friday put paid to any river fishing, and after a chat to Dave Haines and Shaun Townsend I set my stall to fish Windmill for the first time.

I got to the fishery a little late (due to over celebrating the Rovers winning the day before) and found only another 7 anglers willing to face the elements, apparently Mike Nicholls and Bela Bakos did come to the venue but cried off! I was given a very warm welcome by fishery owner Terry and the other (regular) anglers and had a quick look at the lake as Dave Haines decided what pegs to put in. It certainly was very windy, and the far side was a bit better as the wind would be ever so slightly off your back. Dave put every other peg in from 11 to 1 then 31 and 29, the last two having a little calm water. I drew peg 3 which meant nothing to me, but most people didn't seem to fancy it, and a quick ring to Shaun didn't give me a lot of hope as his advice could not be followed due to the wind. I took this photo after the match when of course the wind had dropped a little lol. 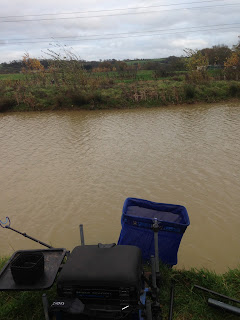 The wind was so bad the first thing I set up was a little lead rod, but as it turned out I never picked it up. I then set up a 0.75g pole float with a 16 B911 to 0.14 exceed. Plumbing around I found the bottom of the shelf at about 5m, and I used my short no4 section to help control the rig. The only other rig was a 4x12 job for using in my left and right margins, with again 01.4 to a 16B911. The water was very coloured and I hoped the fish would come in close to me.

On the all in I fed 4mm pellets in the margins and a conker ball of micros at 5m, starting here with a 4mm expander on the hook. Everybody else seemed to chuck a lead or a feeder to the island, maybe I was on for a battering. It took about 10 mins for me to get a bite and a little skimmer of 2 to 3oz was swung in. Back in again and soon had another tiny skimmer. By now Dave Haines to my right had lost a carp on the lead and Gerry Welsh to my left had one, further down on peg 9 Bob Price was getting a carp a chuck.

After an hour I was getting regular bites from small skimmers but nothing else and quality. The lake was now tripping very hard against the wind and I went 4" over depth to try to slow the rig down. I'd basically drop the rig in and try to hold it steady before either the trip got the better of the rig or the wind blew my pole tip and moved the float. The small skimmers didn't mind the bait tripping through but I thought the better samples might not. I tried a piece of 6mm meat on the hook and after a a bit of a wait a bite and a skimmer of 1.5lb. Sussed it I thought, but no, it was a longer wait for a bite on the meat and then I'd miss it every time, I assume it was the little skimmers.

Although only odd carp had come out (other than Bob) I was not to keen to chuck the lead as I was getting a bite a chuck on the pole and enjoying seeing the float going under. About halfway through I added another skimmer of 1lb and a little crucian, a couple of missed bites saw me rest this line and go in the margin. LH margin was useless and never produced a bite, RH margin and the float went under and carp on, well when I say carp it was 4oz. Carp under 8oz are to be put in the silvers net so I was happy enough, and when I had a 4oz perch in the margin next I felt someone was telling me it was a silvers day. No more bites in the margin today.

Back out at 5m and the peg seemed to have slowed with no bites, but I let the float trip through and about 8ft from where I fed the float dipped and I had knocker on, or as we know it a crucian. The next 3 drops in the same hole and 3 crucians, the smallest was 4oz the biggest 1lb. I kept the odd conker of micros going in but the fish seemed to be backing off, or the feed was going down a long way with the trip and I went even further down the peg and got bites. I now started to get the odd 2oz to 4oz carp (probably 10 over last 2 hours) and I had a another lovely crucian off about 1.5lb. As soon as those better fish went it would take a few minutes for the little skimmers to come back in again, and I just kept catching them with the hope of the odd other fish showing up, and I did get a 12oz tench and a couple more small crucians. When the match had finished I was really happy having had a bite nearly every cast and enjoyed battling the elements. I'd caught all bar one skimmer on 4mm expander, meat and corn were not to the silvers taste today,

I managed to win the silvers today, my weight was 23lb 8oz and I must have had a hundred fish, Terry took a snap of my net. I think 13lb was the next best silvers weight, but there are certainly lots of silvers in here. 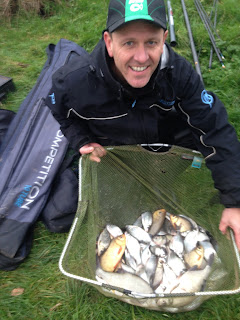 Winner on the day was Bob "the bread " Price who had 70lb+ on the lead with bread. Bob had caught the same weight from the next peg on Thursday, and it seems the carp seem happy to be shoaled around the end of that island. Gerry was 2nd on peg 5, he had 44lb of carp on the lead.

Well that was an enjoyable first visit to Windmill, it is certainly a very different venue to when it first opened and there are plenty of bites to be had. I shall go back again hopefully when the wind is not so bad so I can fish a bit further out!
Posted by Tim Ford at 19:23