A day out on the River Tone in Taunton

For some time Brian Gay had told me of the great fishing on the River Tone in Taunton, specifically the stretch in the town which is free fishing. Since I had not fished the river before, and not fished flowing water for ages I had to give it a go. I found a free day on Friday but getting up a 6am was tricky after picking up my daughter in town at 2:30am. (Lucky for me Brian rang me and woke me up!)

I think it worth mentioning the attributes of this stretch of river; firstly there is a car park quite near (Wood Street) which for £5 or £6 you can park for the day, don't let that put you off as the fishing is free. Then it is a walk across a road, past Lidl and onto the river where a proper concrete path runs next to it. Probably still a walk too far for some aging commercial anglers (lol), but with my Preston Trolley loaded up it only took 5 mins, although I did get some strange looks on the way back. The river was described by Brian as a mini Rotork (stretch of Avon in Bath) and I could see why he thought that. My peg though had no trees but lots of weeds on the far bank, but I would not be fishing all the way across there. 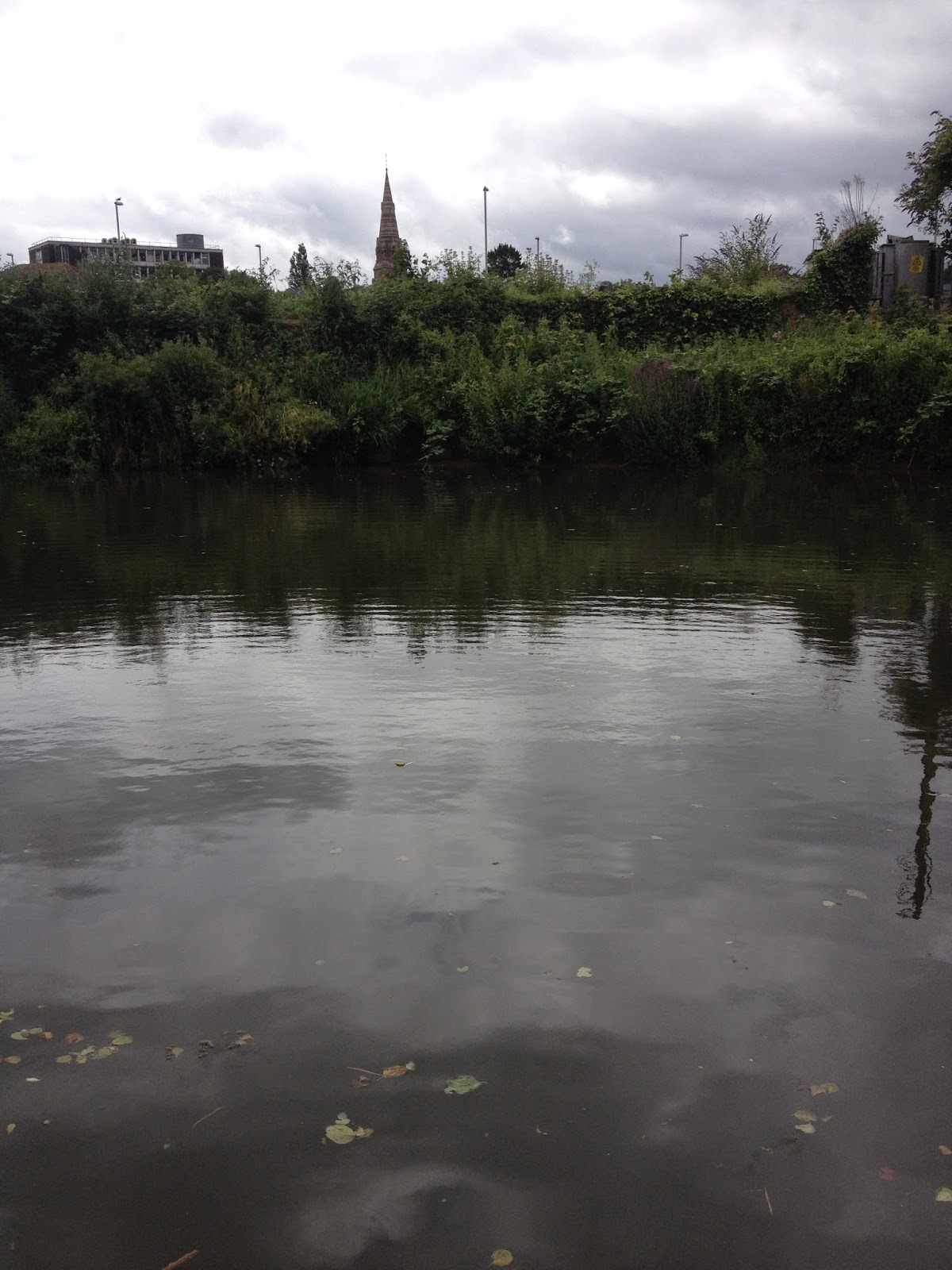 Brian fished above me and he was just above a big willow tree, which although it looked the part Brian had put me in what was considered the better peg. 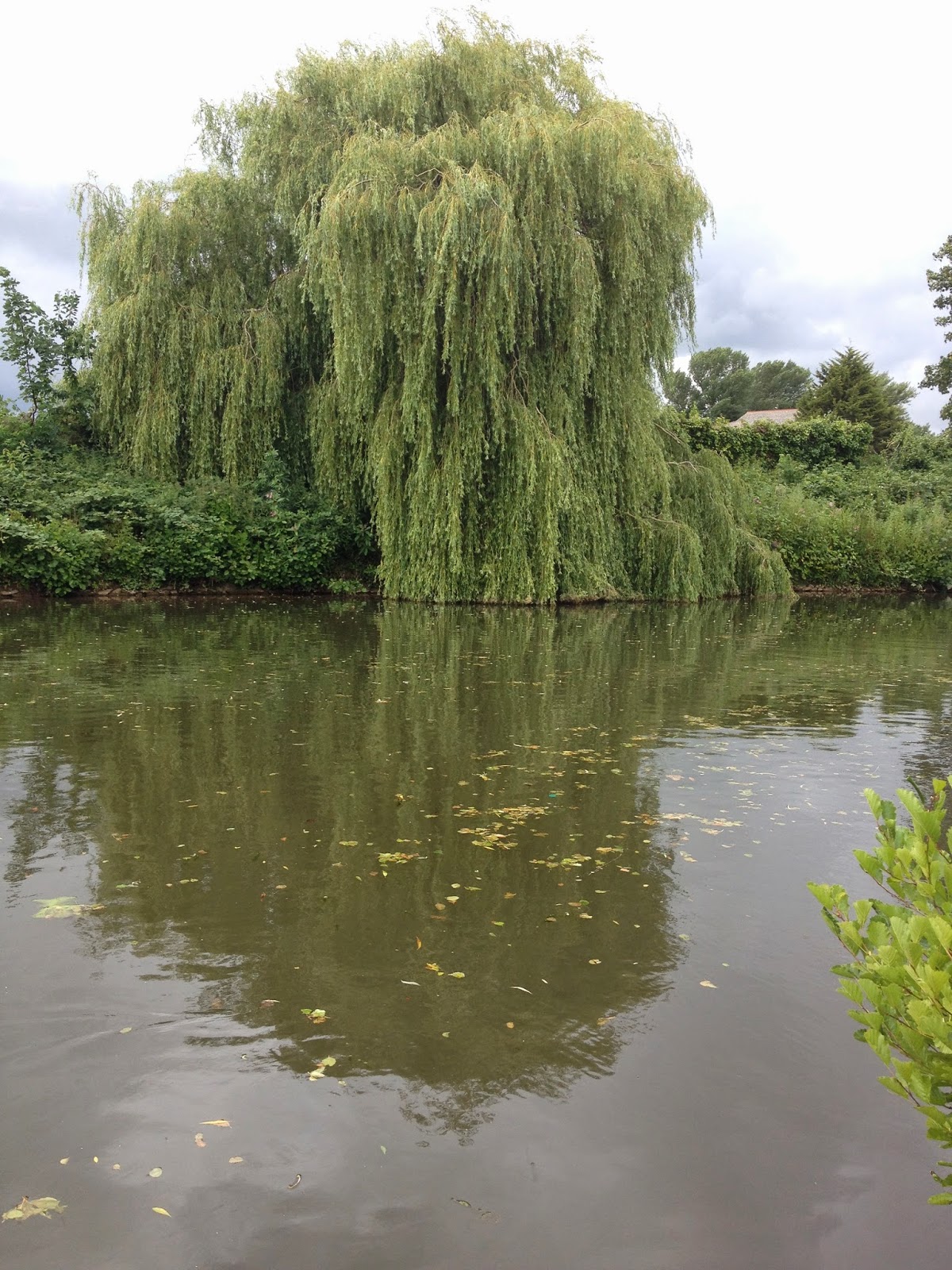 Brian had already set up and had just had a few casts when I arrived, he had picked two swims which he had been informed had some chub form although he expected us to catch a lot of dace and we had 6 pints of maggots each to feed them off! My peg was a little steep to get down, but nothing I'm not used to, but at the waters edge there was a lovely concrete bottom which made it easy to set my box up on. 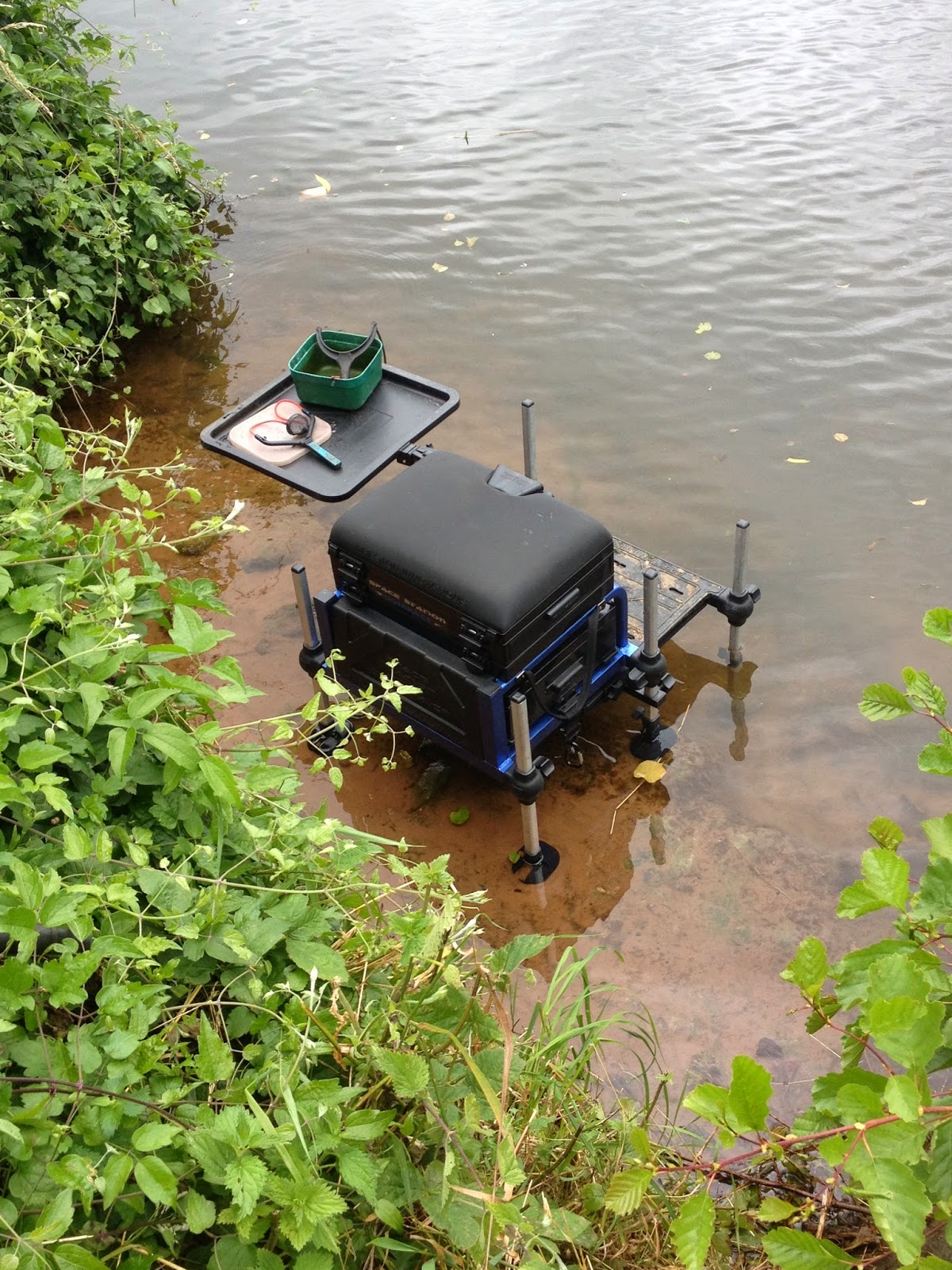 I had come with the expectation of fishing the stick float and the waggler, but the flow in the river was not conducive to a stick. As such I just set up a 3AAA waggler with to start an 18B611 to 0.128 exceed. I thought that was beefy enough as the chub weren't expected to be big. I started with the wag set to 4 feet deep with just 1 no8 and 1 no10 down the line. From the start I fed half a pouch of maggots to see what would happen, actually I cast out before I fed on the first chuck and as I fed the float went under and back came a sucked maggot! For the first 20 mins I missed a few bites had a couple of dace and a 1lb chub, the wind then started to become a pain (doesn't it always!) swirling left then right and often in my face, it made loose feeding accurately very difficult and I ended up trashing 2 catapults during the day. I tried altering the depth and moving the shot and going a bit deeper caught me a roach and this little beauty, a grayling. 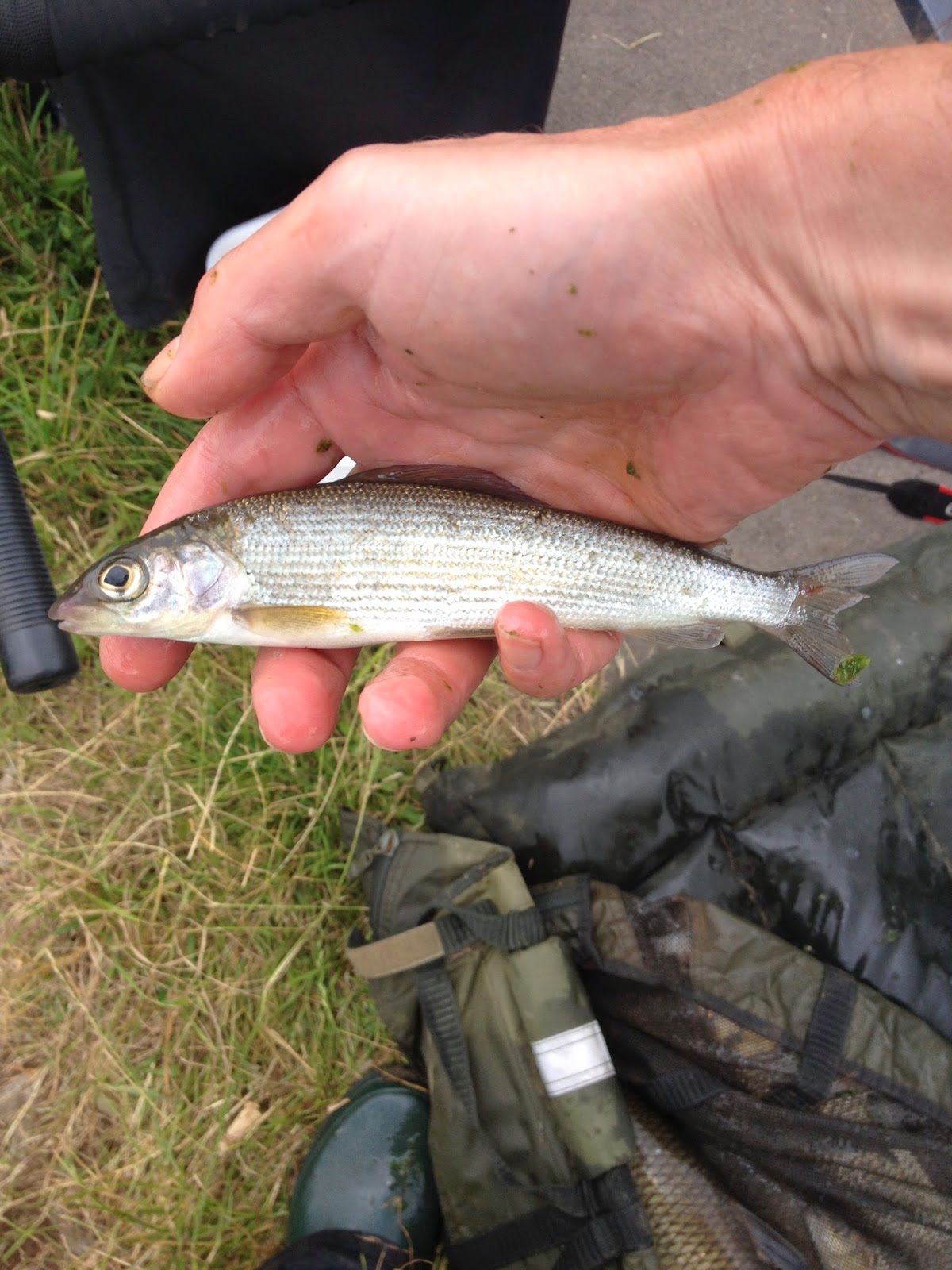 As I had missed a few bites I stepped up to a 16 B611 and all of sudden I had a run of chub, with most just over the 1lb mark, and then they started swirling for the maggots! After 90 mins Brian came down to see me, I reckoned I had 15lb, Brian had as many chub as me but his were the 6 to 10oz stamp we had expected to catch. My stamp of fish and both are lack of dace were quite a surprise to Brian. From this point on I had to work hard to try to fool those crafty chub, I cant say I worked anything out but every now and then a little change caught me a fish, but only the one. I did straighten the hook once on the strike (Zorro) so I changed to a 17 B711, that was handy as not long after I had my biggest chub which we weighed at 2lb 14oz (Brian's biggest weighed the same.). After about 4 hours I had fed about 3 pints of maggots and tried to force things by feeding even heavier. Sadly this had an adverse effect and the chub stopped swirling and at the same time they started swirling in Brian's peg! Things tailed off for me after this with just the odd bite and at 2:30 after about 5 hours fishing I decided to pack up as I wanted to get back to Bristol before the traffic built up. Brian weighed my fish for me and they went just under 26lb, which is a cracking weight from any river and it really made my day. Expert cameraman Brian took this catch shot. 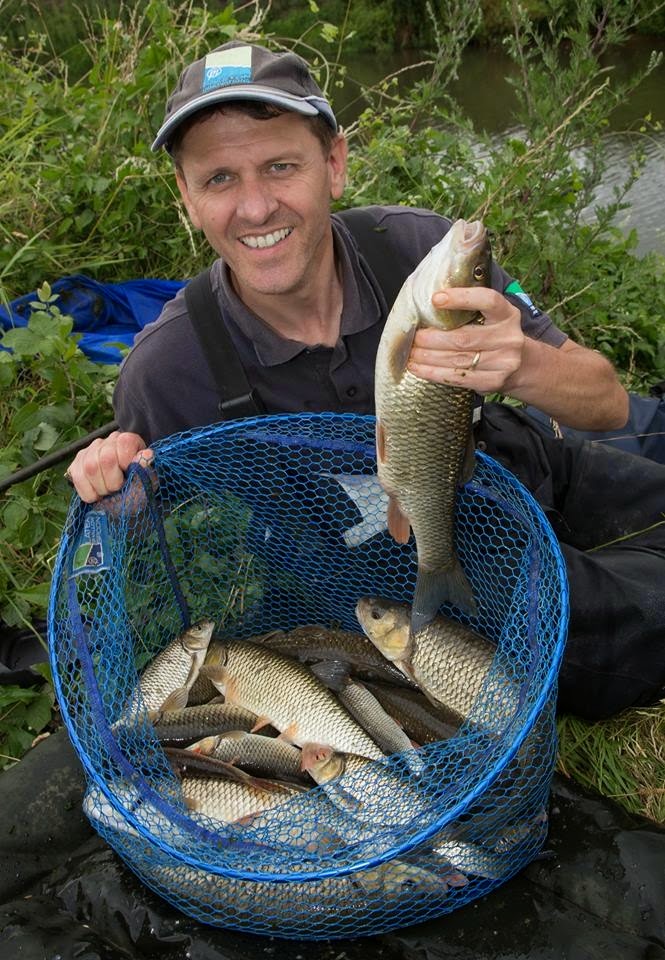 Brian fished on for few more hours trying things out to fool those chub, and he had a few more and a couple of 1lb perch to end up with 32lb. When you consider our weights of adjacent pegs, in very tricky fishing conditions (a slow river, clear, often sunny and a poxy wind) you will appreciate that high level of sport this venue provides. I am sure 50lb+ would be achievable with a better flow. I have only one bad thing to say about this venue..... it is too bloody far away from where I live. I am trying to convince the wife that a day out shopping in Taunton is a good idea and that I can fish whilst she shops. A visit to the river after the summer has got to be on my list of things to do this year.

Landsend Sunday for me, guesting on the float only again. Not a venue I excel at probably cos I don't fish it enough, (and I really don't want to be fishing 16m all day as that will but me in traction!) but a venue that needs working at and that suits me.
Posted by Tim Ford at 11:13