I decided to fish Acorn as Glenn Bailey had a days holiday on Tuesday and it was somewhere he likes to fish, and I hadn't fished it for a while. This match proved very popular today, with anglers who were on holiday fishing, as well as a couple of Welsh anglers Giles Cochrane and Lee Pestilicco (no mugs them!). With a club match also booked onto the lake it was not possible for everyone to fish on Paddock and so Mike Chapman had to also peg the top lake. After much discussion it was decided to have 3 sections of 9 and pay 2 overall and 1 silvers in each section, this was because the top lake was not expected to frame. I hoped not to draw the top lake, simply because I didn't have the gear or the bait with me to tackle it. However, drawing peg 31 at the top end of the lake was not my ideal choice as this can be a hard area. Glenn drew 5 which can be very good, he had the two Welsh boys on form pegs 1 and 2 so a tough job there.

Getting to my peg I was disappointed to see very little fish activity, and Glenn only made me feel worse telling me his peg was heaving! My section went from peg 17 to myself, so the danger pegs would be 21 (Harry Muir) and 22 on the bridge I felt, venue regular Dave Wride on peg 23 would also have to be a threat. I had come to this match with a very focused approach, pellet and paste short. My long line was top set plus 3 sections with a 4x10 Big H, 0.185 to a 12 Drennan Carp Feeder hook. My margin line was a top set to my left in about 16" of water with the same rig components. The margin line had been well cut back by someone and so it made my choice very easy. Hopefully you can see that in this picture, as well as the clearing storm clouds. 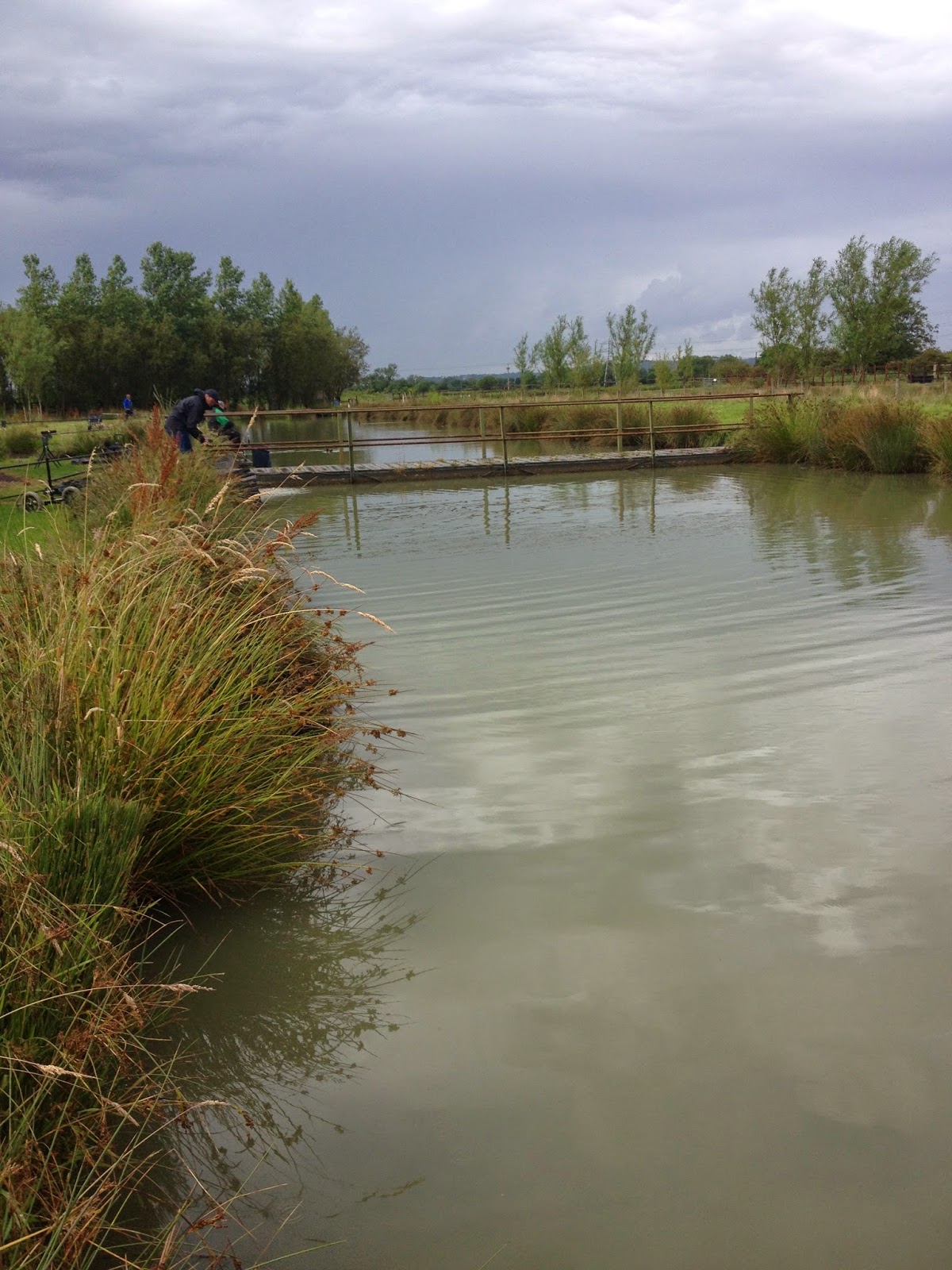 When the match began I fed a big pot of 4mm pellet on my long line, and a half a big pot of 6mm pellet in the margin. Out on the long line and a small fizz was a good sign and within a couple of minutes the float zoomed under and I landed a 4lb carp. After 15 mins I had another 2 carp, although these were (ahem) foul hooked! Another 30 minutes and nothing so I had a quick look in the margin and a 4lb fish took a liking to my paste, that was a lone fish. Looking around people in my section seemed to be struggling early doors, so I stuck with my tactics.

Two hours into the match and not another fish! I decided to grab a shallow pellet rig and try right over as the paste was really not working. Four foulhookers across was my sum total and I was now wondering what to do next. The guy on 29 only had 1 skimmer, and it seemed all in my section were struggling, even the bridge pegs were not as prolific as normal. Down on the island pegs 1 and 2 were catching, but Glenn only had 2 carp.

With 2 1/2 hours remaining a thunderstorm hit us, and this coincided with my margin coming to life. Feeding some 6mm pellets by hand and also in a toss pot with the paste I had a steady 1 1/2 hours. The last hour though only gave up 2 more carp despite there being fish in the swim as my float was often moved by a fish. They would not take the paste and a try on my pellet rig didn't work. I cannot be sure why this was, but it could be I got carried away and fed too much. I did hook a carp 5 mins to go but tried to bully it in and pulled out of it, plonker I hoped that wouldn't cost me. I noted the lads on bridge pegs 33 and 34 pulled their nets out straight away as they struggled.

Andy Gard on 17 brought the scales to weigh our section starting with me, my carp went just over 61lb which was about what I thought I had. Pegs 29 and 27 DNW, Dave Wride had 29lb and then bridge peg 22 had 40lb+. Harry Muir on peg 21 put 71lb on the scales and he won the section, Andy Gard had 22lb of silvers to get the silvers Prize, and so I had managed to pick up 2nd overall.

The top lake didn't fish that well with 56lb being top weight I believe. The island section plus some other pegs was much better though with Lee on peg 2 winning with 140lb, Mike Chapman on peg 36 120lb (paste), Giles on peg had 115lb. Glenn had 70lb in the end with a late run on the paste in the middle. He was 5th overall with that, but did go over the 70lb net limit.

It was a strange day with the weather starting cloudy, then getting sunny and warm and then stormy. The fish were unresponsive in many pegs with most people catching better in the last half of the match. I was happy in the end with another pick up, that's every time since I've come back to fishing after my op I've won a bit of dosh. That may change this Sunday with a trip to Ivy House on their open match, a lot of regulars fishing there so will need a good draw.
Posted by Tim Ford at 20:42