Guesting again today and was given a bit of a disabled draw by being allowed to only draw a peg on either Speci or Match Lake (as lake 3 is a bit far from the loo). Glenn Bailey was playing taxi again this week and we got away from Shipham cafe in plenty of time to get to the fishery and dip our nets and stack up our trolleys! I got to the front of the draw queue and pulled out peg 1 on Match lake, a nice draw and the Landsend master Tony Rixon said he fancied it. Tony pulled peg 5 and I though I fancy that, didn't want him in my section lol!

Getting to the lake I had Paul Blake as my neighbour on peg 3, opposite on 24 was John "Turkey" Thompson and I could also see Joe "Tourett" McMahon on 22. Peg 1 has many options, other than the bush at 4m most of them were 14.5m plus, so I was going to be getting a physical workout today. Below you can see the end of the island I could fish to. 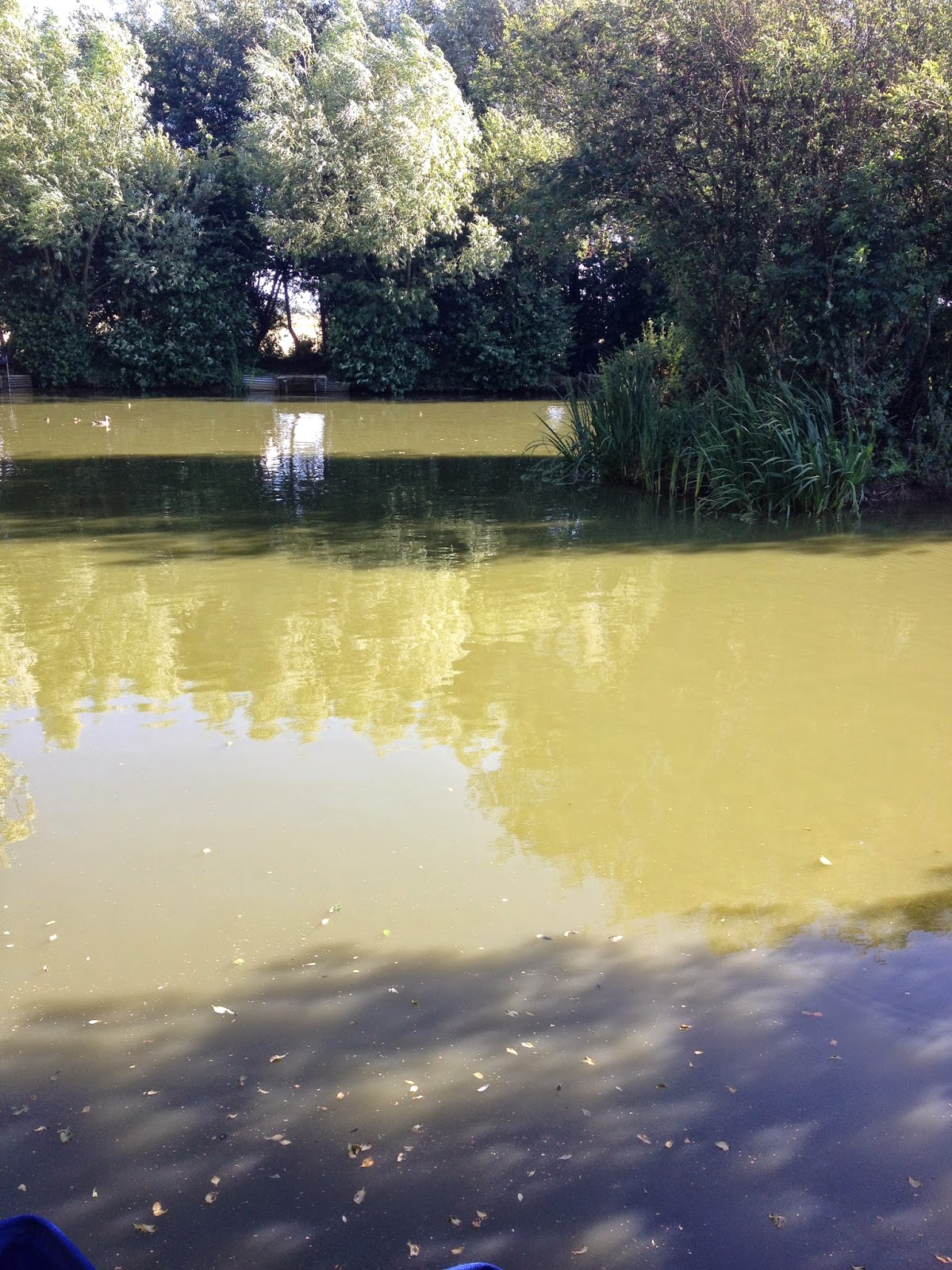 And here you can see the left hand margin I could fish at about 14m, I did a bit of pruning before the match which certainly helped during the day. 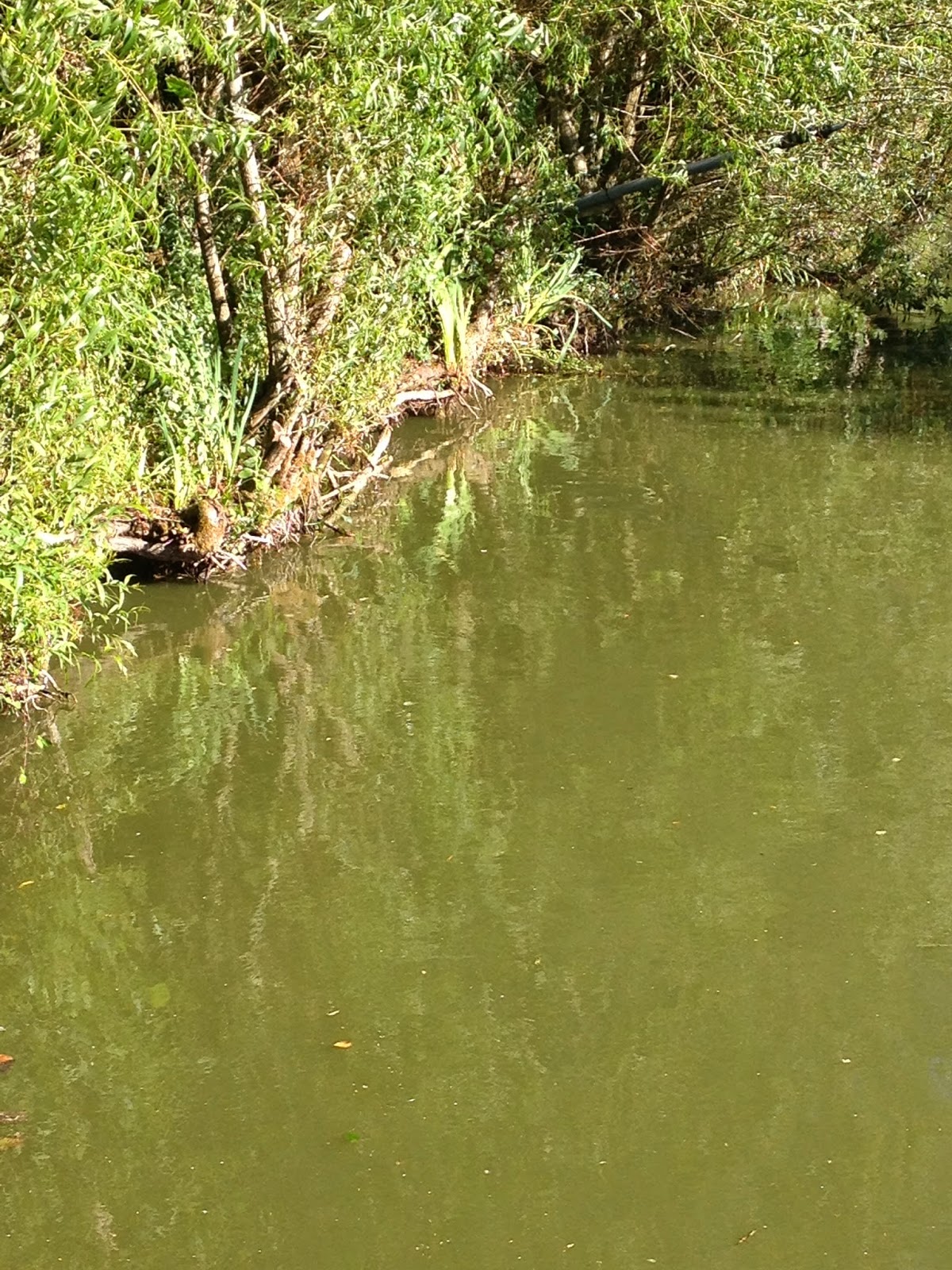 I set up a 4x10 durafloat 10 with the usual 0.16 to 16 PR36 and this was for hard pellet and would do for the left hand margin and against the island in two places as the depths were almost identical at about 14" to 18". A rig for 9" was set up but I never caught on it. A depth rig for by the bush but I never caught on it! As a late idea I set up a paste rig as Mike Duckett said the fish were responding to the paste.

To start the match I fed a near full pot of 6mm pellet in front  for the paste and potted some more into the margin and one of the island swims. I fed meat and corn against the bush, another waste of Lidls finest... I started on the paste and first drop in I had a 3lb carp, great Mike was right, ermm no more bites other than a skimmer. I was feeding an island swim and the margin by catty but really didn't want to try these this early. With no bites on the short lines I went to the point of the island and fed a toss pot of 6mm pellet and dropped in with an 8mm banded pellet. I had a liner almost straight away, then an F1, then a carp, then a perch lol! A couple of foulers then led me a merry dance and slowed it up so I tried the island toward peg 2 and caught a carp straight away. This swim also quickly slowed up and I only managed another 2 carp from the island all day.

I took a couple of early carp from the end bank margin but that was that and I left it alone again. The usual mid match lull was on me again and I probably had 7 carp 4 hours. Luckily from this point on the end bank margin got going and at times the elastic was ripped out of the pole, the odd fouler was inevitable though. It was really hard fishing though as the wind was really blowing and I was having difficulty keeping the rig in place even with a bit of extra line above the float. Feeding was also tough, keeping it accurate that is. Martin McMahon watched me for a bit and had a good laugh at my piss poor feeding, but he came in handy removing my rig from the bank on two occasions! I was really enjoying the match now but was having to go in tighter to the bank to get proper bites, trouble was that was so very difficult as the wind just kept getting worse. With 25 mins to I was totally knackered and the fishing went tits up, the bites went iffy and I couldn't hit indications deep or shallow. I trashed a rig and my pole nearly came off the roller, and I never had a fish, it was a sad end when I expected to be still catching well.

I had ended with 20 carp, which was more than the other people in my section, I thought I might have 80lb, but some were saying I'd have 100lb. When the scales got to me Tony was winning the section with 76lb, having just beat Paul who had 75lb. As my first net was weighed I knew I did not have a ton, I had quite a few of those smaller carp that do tend to inhabit the end bank. I was though delighted to weigh 82lb and win the section and beat the master. Truth be told I think my peg would have framed today with an angler like Tony on it, I really need to get to the gym!

Back to work tomorrow, I will be aching like buggery after today so nice to sit back in my comfy office chair! Acorn Tuesday my first time there for some time.