I'm now working a 4 day week so have Wednesdays off, that meant I got to make the small numbers up on this match along with Glenn Bailey who I gave a lift to. Tony had been kind enough to txt Glenn that the M5 south was shut so we decided to take a route (thanks to Sat Nav) that would go via Street. The traffic wasn't that bad but we nearly got hit on some narrow lanes and then way before Street we came across "Road Closed". We took a guess and ended up on a very small country lane and had a few near misses but we got back out on the right road and found a Sainsburys to have breakfast. Just yards from the venue we got stopped by Farmer Giles moving his herd of cows, and we arrived about 2 minutes before the draw, what a journey!!!!

With only 10 fishing the venue owner gave us the top half of the lake, pegs 6 to 15, and I fancied 6 and 15 as they were at the windward end and could obviously draw a lot of fish. I managed to draw as far away from my choice as possible on peg 11, but this is usually a good peg for carp  being in a corner where the wind usually blows. Glenn drew 14. For company today I had John Bradford on 12. See below my view of the end bank. 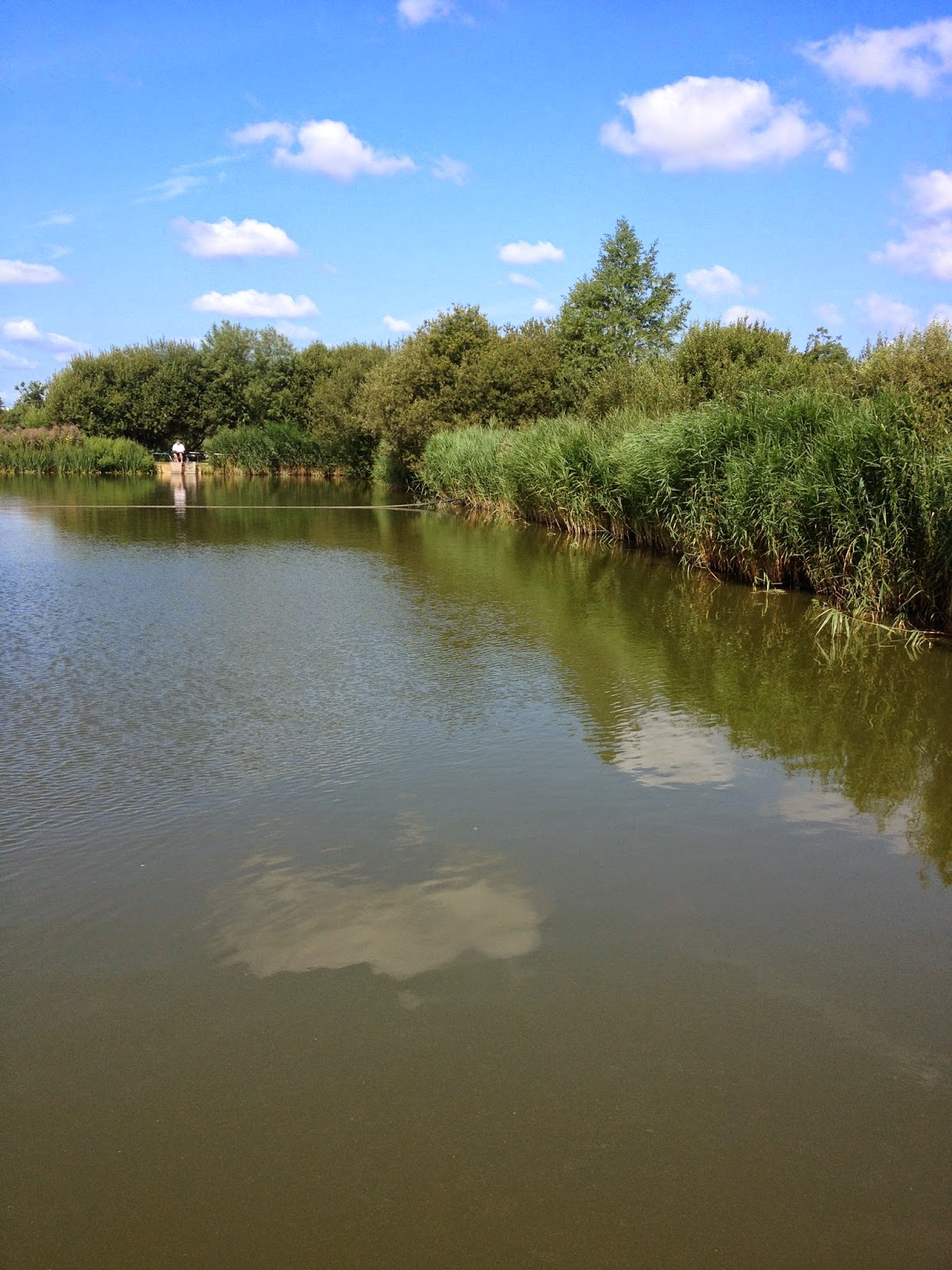 I set up a pellet wag and straight lead today, these would be used over where I fed 8mm pellet as far as I could. A 4x10 durafloat for the left hand margin was set up but caught nothing, then a 4x12 version for fishing about 14m to the end bank in about 4ft of water, and rig to fish shallow, 16 PR36 to 0.16 featured on all rigs. Just as the match was starting the wind started to get up a bit and was now more in my face, not what I needed but I still started on the wag after feeding a pot of 8mm pellets to the end bank. It was though a very slow start for me, but Fabio over on peg 10 had one on the wag first chuck. Here he is below trying his end bank later on. 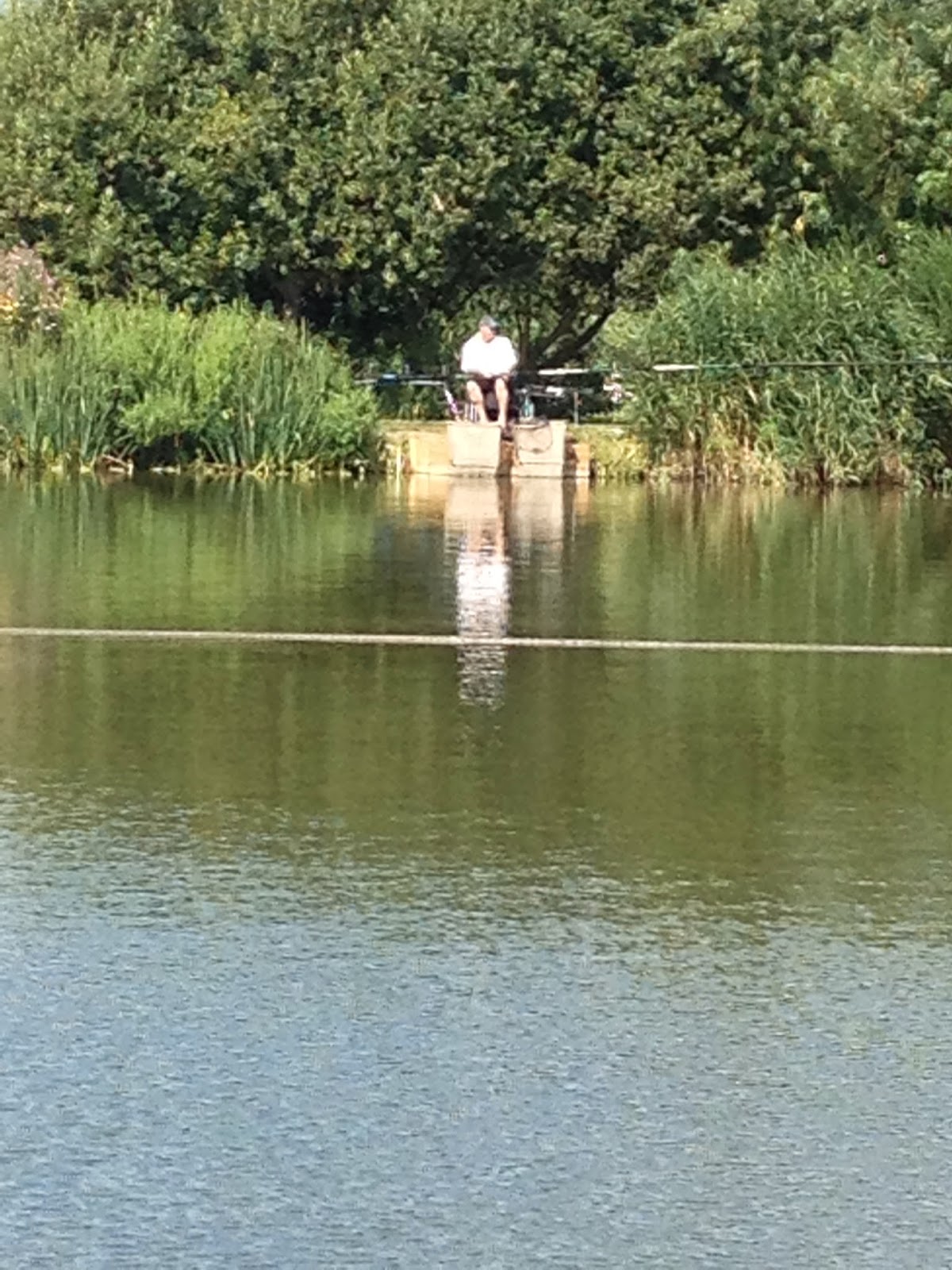 I was going nowhere on the wag and the wind was not helping, I chucked the lead out and had a carp first cast, next cast a liner and next cast a snag and I lost the rig and put the rod down never to try it again. I picked up the wag again and increased the depth to 3ft and I had a bite first cast and after a very manic fight landed a 10lb ghostie. Sadly the wag produced no more and I came off it but did continue to feed this line.

After only 90 mins, early than expected, I was trying the end bank and on my first drop in with an 8mm pellet in the band the float buried and the first carp was hooked and landed. Unfortunately the fishery landing net broke and I had to go back to the hut to get another one. I could not get close to the reeds due to them being overgrown or fallen over, and the line I had picked at 14m gave me a little hole to fish in but I was still a good 18" away from the edge. For this reason I did not want to feed with a catty and instead continued to pot in 30 or 40 pellets after every fish. It was hard work double shipping, but it was proving very effective with carp coming regularly and no foulers. Inevitably it slowed, but the wind now making the wag a waste on my bank, and my left margin not producing I continued with the end bank. I had a real quiet spell and so I put a big pot in again and then I had two tench in two casts.

Glenn was doing well he was catching a lot of skimmers and had a few carp. I continued to catch carp but it was a long wait in between bites but as nobody had really been bagging I thought I was doing OK. However, Tom Magnall over on peg 9 had go the pellet wag to work and was now flying.

My last 90 mins were the poorest of the match for me, the wind was making it now very difficult to get my rig into position, and when I did the reeds were bashing my pole and catching the float, quite frustrating. This was at a time when I was struggling for bites and makes it all the more harder. I got them back in the swim and had 12lb ghostie which I pulled out of just as I dipped the landing net to it, balls! Then I had fouler trouble and lost one in Johns swim (think I trashed his rig to oops!) but going shallow got me no bites and the fish were doing my head in. Fishing 18" off bottom I caught a tench and another carp and soon the match was done. Whilst I'd caught plenty and had a real enjoyable middle period the end of the match has I though cost me.

The scales were on the far bank and when they got to me Tom Magnall was top with 122lb, and Ziggy the Polish angler had 76lb of silvers!!! My fish weighed 113lb 11oz and so that big ghostie cost me beating Tom. The gimp had chucked back, as did Jamie Parkhouse, Glenn then weighed 54lb of skimmers on paste and with his carp had 113lb 4oz, lol let that be a lesson mate ;-)  Next peg to Glenn on 15 A gent called Terry down on holiday fishing the match weighed in 133lb to win, he had caught all his fish on a top set, well done!

So the two end pegs won the two categories, but the anglers did well on them, I ended up 3rd and another pick up for my troubles. Finally I would just like to say thank you to Tony for running Wednesday matches for so many years, I may not have fished that many myself due to my job, but it takes a lot of effort and phone calls and we should be thankful for all his efforts..... even if he did mug most of us most of the time lol!

Thankfully the drive home was plain sailing, other than a few eejits on the ring road, kids! Back down here again Sunday fishing the float only, I'm standing in for Paul Beaver Elms this time.