My travelling partner today was fellow blogger Mike Nicholls, glad he travels light as it made it much easier to fit all the gear into my car than it normally does with Glenn! It was a nice steady drive to Hilltops cafe and after breakfast we got to see a couple of old Vespa Scooters that had parked up after their event at W-S-M.

As my visits to this venue had so far brought me no coin what so ever I was not getting my hopes up today, and after speaking to Warren Bates whod fished a Frys match recently on the lake, I thought I'd fish for skimmers if I drew in the right area. I'd taken micros, gbait, casters and worms so was well tooled up! Only 13 here today, and Martin Lengahan spread the pegs so everyone had plenty of room. I pulled out peg 32 which as ever meant nothing to me, but I found out it was the end peg today on the car park bank and was told to fish long down the margin. On arrival at the peg I could not see me fishing the margin long due to a huge amount of vegetation, but the margin at 4 to 4.5m looked inviting enough anyway. I tried to cut down some of the trouble some reeds and grass but it was hard work due to some old stiff plant stems, I realised after theses stems cut my arms to bits.... 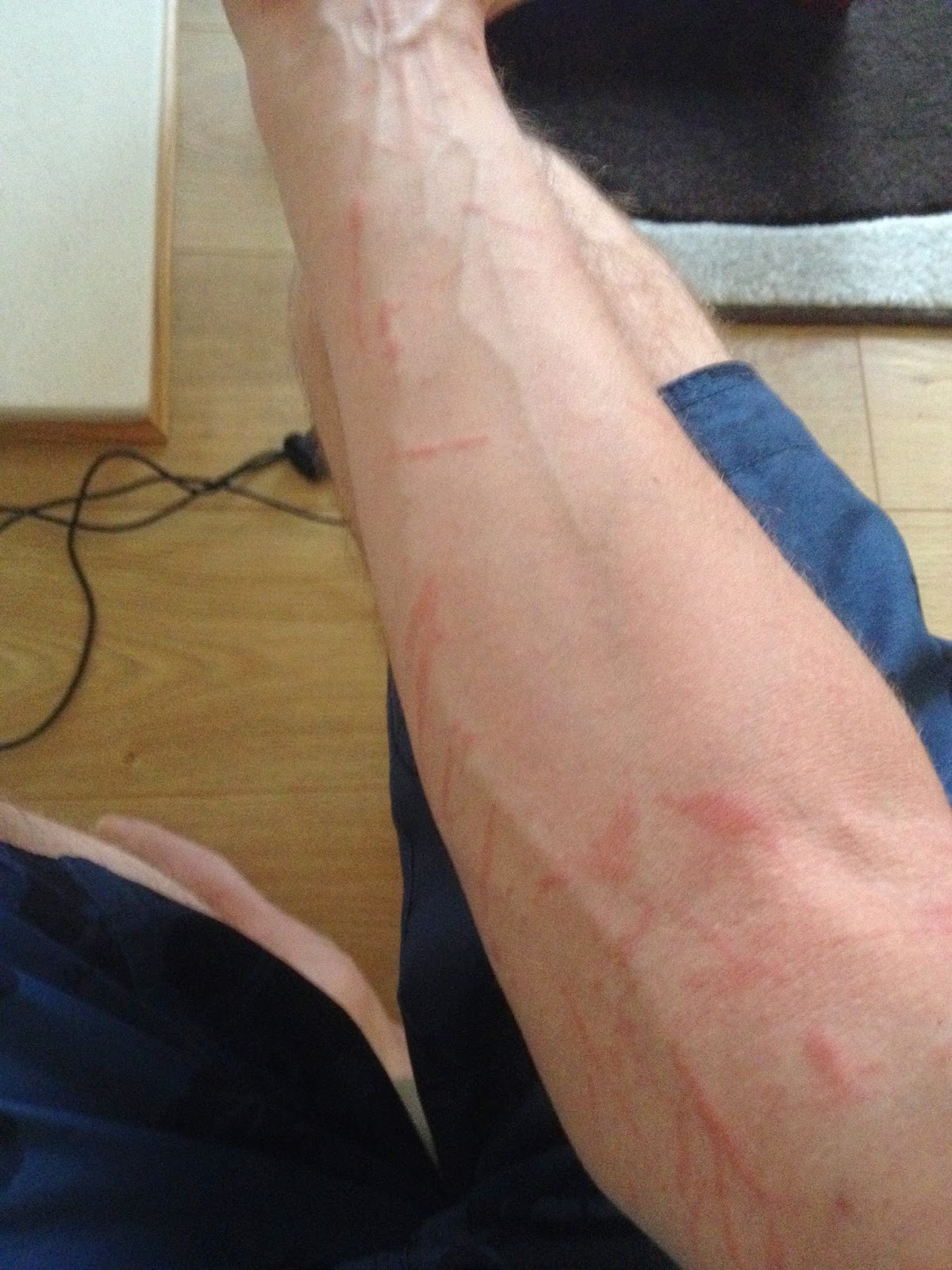 On the whistle I fed a pot full of 6mm pellets at 9m, some handfuls of 8mm pellet in the left hand margin and caster and 6mm in the right margin. I started on the paste and had a fizz straight away and after a few missed indications I landed a 3lb carp, and then a skimmer, but it wasn't right. Going out on the depth pellet rig with an 8mm I could catch skimmers about 6oz to 10oz, not quite fast enough to rack up a big weight but it was interesting and not much was being caught up my end. It was a slow first couple of hours and I had 3 carp and some skimmers but was going nowhere and fruitless drops into the margins led me to think the Woodlands curse was on me again. I dropped back in the left hand margin and the float wouldn't stay still as small roach were attacking the hook bait, this despite me upping the feed. Luckily though the carp were below the roach and I had 3 in quick succession. Mike West turned up at this point, he has not been too well so it was nice to see him, even if he was struggling. I told him there were now carp in my margin, but I need to sort it. Mike left about halfway through the match, and I was now getting into a rhythm in the margin; hook a fish, feed, land fish, feed, drop in again. This worked well for a while, and I suddenly realised I had no idea what weight I had in my net, the limit was 80lb. I started filling the 2nd net and got out my new purchase a "clicker", I had one spell filling this net where I had to shallow up to avoid foulers and keep catching. On the far bank on peg 9 Rod Wotton was really catching well, and we had a good bit of banter about who had the most. Rod did say Leon Hubbard further down my bank was now emptying his margin and catching up.

With an hour and 15 mins to go I had to get my 3rd carp net in, the margin went a bit iffy so I tried the right margin but it was full of roach so I threw loads of casters and 6mm pellets in here! I caught a few more in the LH margin but it went really iffy again, and I was annoyed at the sight of Rod continually playing fish. With 20 mins to go I tried the RH margin and bingo, 3 fish in 3 chucks, then 2 fish in the LH margin to end the match, those last fish went 30lb on my clicker.

I knew I had a big weight but was unsure of what was in the first net, my other two nets I'd clicked at about 70lb each, so maybe 190lb was possible. The weighing was started at my peg, and my silvers went 7lb+ and after a few weighs and some help from Ray Cooper to lift my nets my carp went 218lb, for a total of 222lb 15oz !!!!! That's the most I've ever caught, wow!

Tom Magnall weighed 87lb on the next peg (think there may have been a few more fish in my peg lol), and then we had to get to Leon Hubbard to see what he had, he was admitting to 120lb. Leon needs a clicker, as his weight went 191lbs, and as Shane Caswell said, Leon was a whole keepnet out on his weight, lol. On the other side of the lake Paul Locke weighed a fantastic 48lb of skimmers on paste to win the silvers, and then it was Rod to weigh and he had 174lb and that meant I'd won, yay! 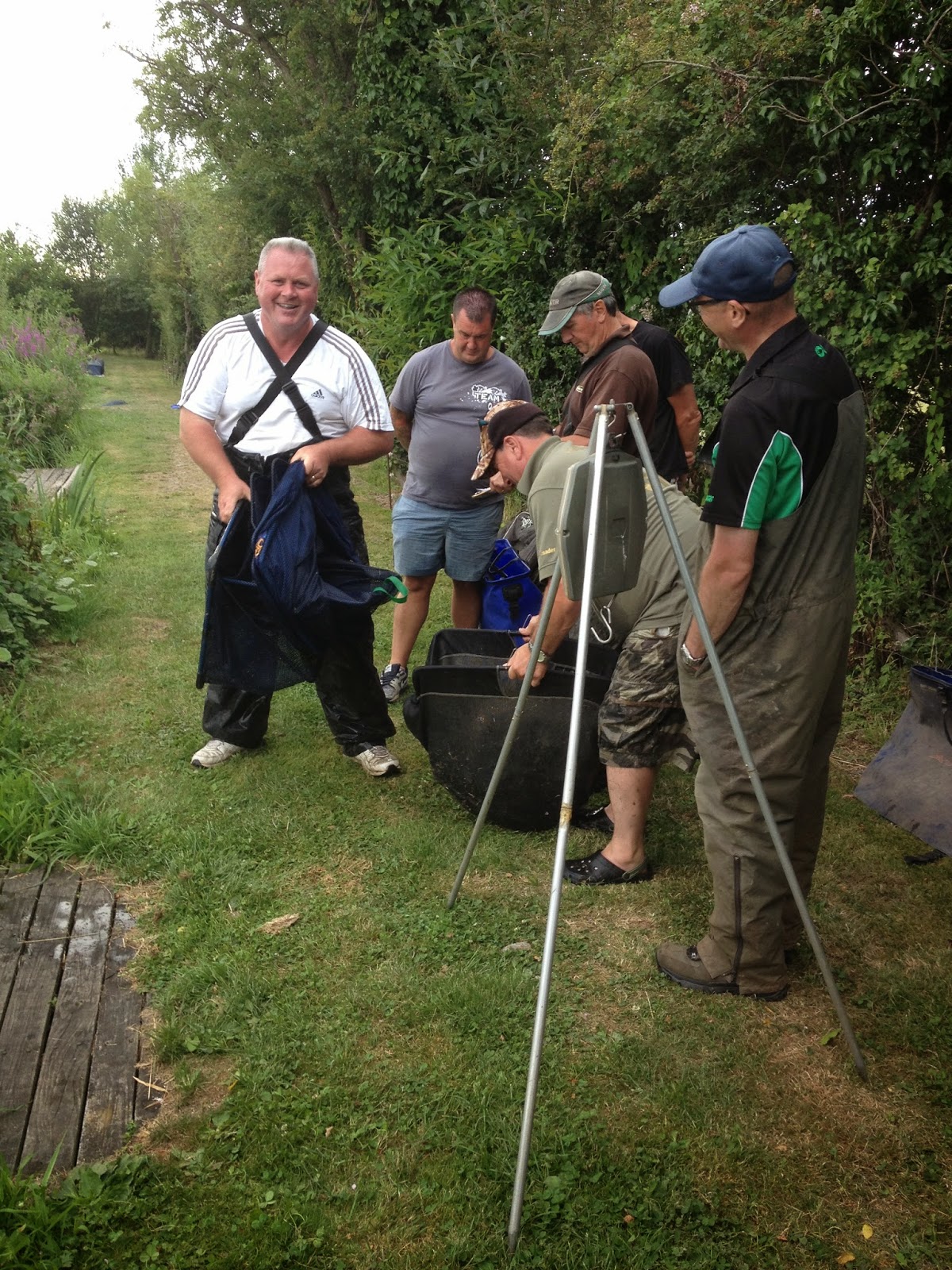 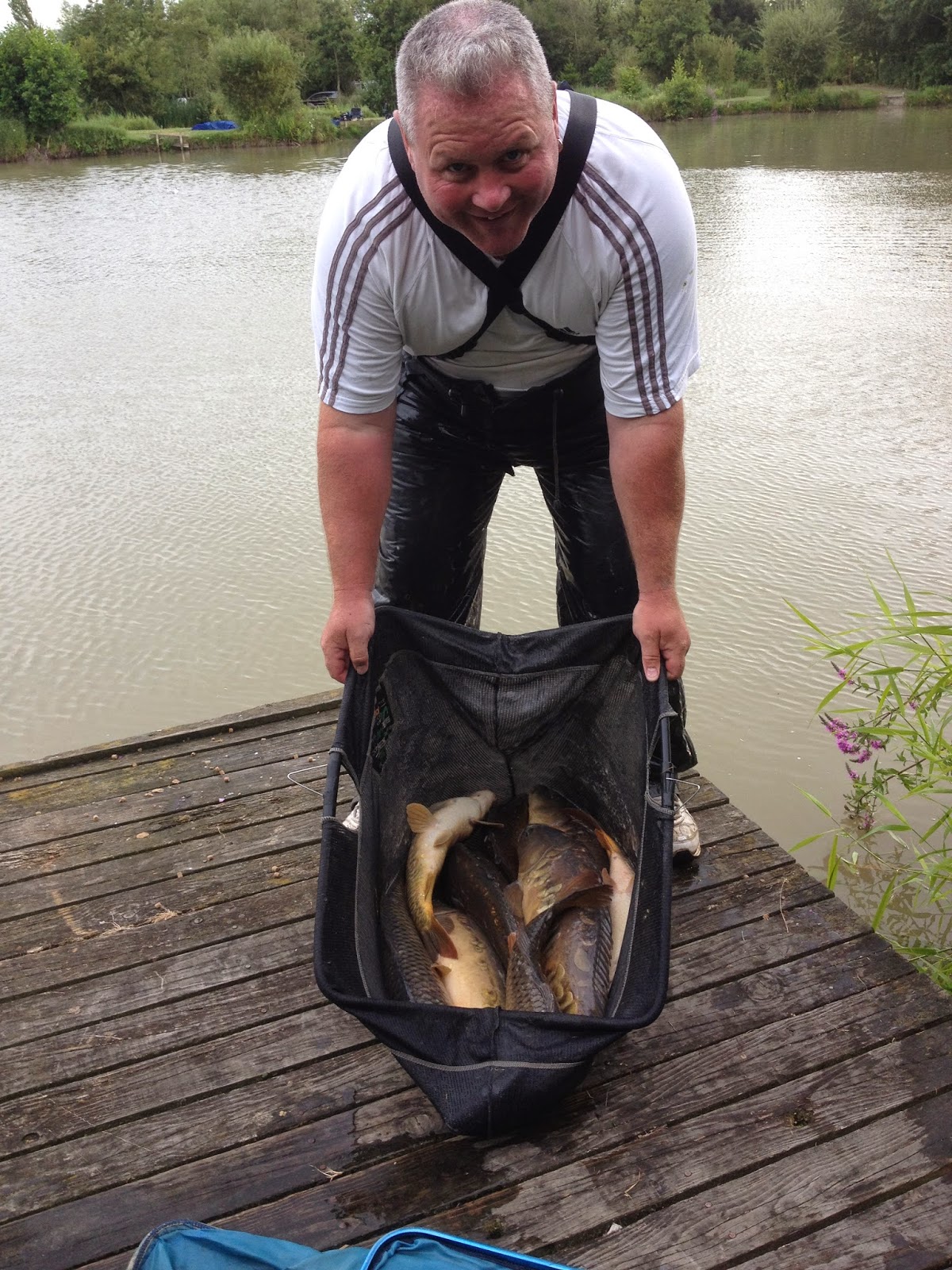 During the day I didn't have to many issues, lost a few foulers, and a few proper hooked carp, changed hooklengths a couple of times when the band broke, and snagged the margin bottom a few times. I can honestly say I have fed and fished margins very similar in the past for little reward, but today it was bang on, and the margins were brilliant all round. Just to say how important tackle set up can be, Leon could have been much closer to me, but he had his elastic snap and said he lost his rhythm after this. Also Rod had to leave his peg to get another keepnet, and he also had his silvers net fall in which he had to spend time retrieving and he lost his 4 tench out of the net. Small things make a difference.

Had a nice cool can of Stella on the way back, and am now looking forward to a good nights sleep. Next up Sedges.