Today's match was in effect a practise match for the next two weeks rounds of the superleague on the Huntspill. However, my team Thatchers had around 12 anglers fishing and the team would be picked after the match. I got to the draw at 8:30 for what I thought was a 9am draw, the draw had begun much earlier and I was one of the last people to draw and had to eat my breakfast rather quick. I drew peg 48 which was probably a flier on the permanent pegs, but the lads sorting the venue out had to strim it out do some weed cutting and created new numbers. Therefor I was actually pegged up at Woolavington Bridge, I was about 6 pegs past the the bridge.

I drove the short journey to the river car park and got my gear loaded and made my way to the bank, I didn't realise there was a cut out route and I huffed and puffed through some long grass. Luckily I bumped in to Tony Goodland who was looking for his peg, he thought he was past the copse but couldn't read the peg number, that would have put me on the copse this side a good peg. Alas, Tony was on this side of the copse and I was next one in, quite a tight peg to him and on my right even tighter to Lance Tucker. Two good Huntspill anglers either side, and on the end peg by the bridge was Neil Richards. It was looking tough to get in the money.

I got the box set up with long legs on the front of the platform going in the water it was a nice position. The river was clear, with little wind but there were plenty of blips topping though Dean Harvey said he had seen a few bream top down by him and Neil. 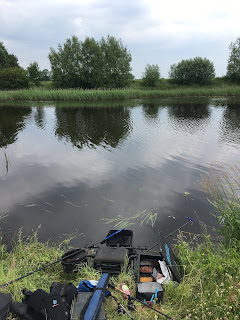 First thing to set up was a feeder rod, dead simple with a 16 PR355 to 0.128 exceed. I did cast a lead out before the feeder was attached and found a clear area just past two thirds. Dragging the lead in close I found weed out to nearly 16m, so this put me off fishing the pole. I instead set up a 3.5AAA Preston Insert waggler, shotted with just 4 no 10 down the line and a size 20 N-20 to 0.10 flurocarbon. This was all I set up.

The match began at 11am and I had about 8 or 9 casts with a decent feeder on, I basically matched what Lance did lol. I then cast out with a worm on to hope for an early bream whilst I fed maggots and hemp on my waggler line at about 20+m. I'd like to write how I had to work out liners from real bites, but alas my tip just did not move and when I tried a couple of a maggots I had a small tap on the drop and that was it. After an hour Tony next to me had 2 or 3 bream, Neil had 3 and Dean had a skimmer. I gave it 1 hour and 40 minutes on the feeder but as I was still blanking I decided to give it a rest and try the waggler. I probably fished the waggler for about 45 minutes and had the odd little roach or rudd but bites were not prolific and the fish a tad small. I was thinking about going back on the feeder when Lance, who had also been on the wag, went back on the feeder and had a 3lb bream straight away. I chucked my feeder out and after about 5 mins had a funny rap, left it and nothing so wound in, it might have been a bite as the worm had doubled over on the hook bugger.

Tony had a couple more bream about now but my tip would just not move, but I did finally get a tiny pull and had a 6oz hybrid on which I dropped off swinging in. With about an hour to go I went back on the waggler and it was much better with more bites and better size fish, roach, rudd, perch and a few hybrids. Tony had another bream but then the wind dropped and all was still seemingly stopping al bream action, Lance had stuck on the feeder after his bream and had nothing and so I just stayed on the wag enjoying myself and was now catching on the drop on single maggot. The river started to pull off to the right late on and this for some reason made my fishing a little worse with smaller roach showing.

When the match ended I was wondering if I was going to beat anyone in the section without catching a Bream, but I had enjoyed the match despite not having a slab, and chatting with Tony and Lance was great as they are good company as well as being good anglers.

Neil was soon up with the scales and Tony's bream went 24lb 12oz, he was clear winner of our section, my silvers went a level 7lb, and then Lance weighed just less than me with 6lb 13oz. I actually beat everyone in the section bar the two end pegs, as Neil had 9lb on the end, 3 small bream and a little tench, I was happy enough as I felt I was fishing for third anyway.

Some of Tony's catch 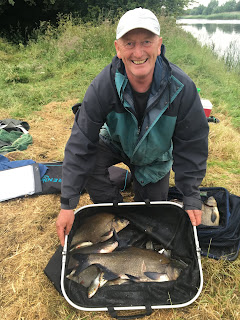 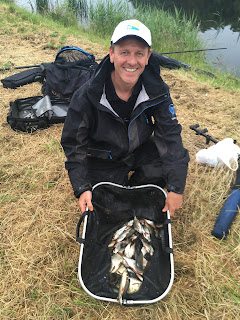 Back at the results it was clear that the fishing had been hard in some areas, bream were not everywhere.

Steve Priddle won the match from a noted good end peg on the North bank, and he had 46lb. Steve Lovell was one off the end peg in the last section at Woolavington and had 34lb and next to him on the end peg Tony Gilbert had 27lb. Tony and Andrew Cranston were the only anglers in the Thatchers team to get into the top 2 of their section and get some coin, I along with a few others was one out. Sadly my result was not enough to get me selected for the team next week, so good luck to the lads fishing it as the team has a slender lead after one round.

I'm hoping to get out fishing on a proper river next weekend, though it may be just pleasure fishing.
Posted by Tim Ford at 21:40