Final match today, Thursday cost cutter. Steve and Matt Long put all of the pegs on Campbell and Carey lake, I was sure of the pegs to be on to frame today bottom of Campbell!

After another lovely breakfast I got all of the gear sorted onto the trolley and pushed it up to the shop for the draw and parked it next to the rest of the lads, and we soon had a convoy. 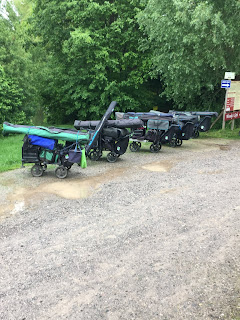 With 37 anglers fishing today it was 50/50 chance of drawing on either lake, but being a cost cutter which ever lake you drew on you were only fishing against them as it was payouts per lake. Into the draw and couldn't believe it when I pulled out peg 121 again, wrong end again! Glenn pulled out 135 and was sure to do well there, I could watch him of course from my peg!

At the peg the wind was blowing up today, and it was straight into the peg. Gutted really as I wanted to fish shallow long but couldn't see me getting the right presentation and the light on the water was awful. Due to the wind I hoped the fish would be close again, so I opted to fish just one section further than yesterday. The standard light pellet rig was set up for fishing on the drop, and the heavier 0.4g version was back out, as was the paste rig. The long rigs were also OK for fishing top set plus one, and I did set up a rig for the margin but never had a bite on that one.

My neighbours today were Woody on peg 123, and Gordon on 119. I decided that fishing for silvers was not an option and as such fed with 6mm pellet from the start, I fed with a toss pot as the wind would mess up feeding by hand. I had a really slow start with a lack of indications for 30 minutes, but then the carp arrived and I had 4 bites and 4 carp on the light pellet rig a great start, it slowed a little but I had 7 carp after 2 hours and Woody and Gordon were struggling with just 2 or 3 carp. Glenn had been emptying it and 10 in the first hour! My peg then slowed up and this was more like a typical Campbell match with a poor mid match. The rain had got worse and I had put the brolly up which made landing fish tricky but it kept a lot of my gear and me dry.

Switching to paste and upping the feed seemed to get the carp back and I caught well again, the fish though were a lot small than yesterday overall. The last hour was only slightly better than yesterday with 4 fish, and no bagging session. As a repeat of yesterday Gordon and Woody in the corners started catching carp late. When the match finished I was sure I had more fish than yesterday but they were smaller, so I said I had about 140lb or maybe close to yesterday's weight. It turned out I had less than yesterday, my carp weighed 142lb 2oz and my silvers just 2lb 9oz for 144lb 11oz. Essentially I just had less silvers than the day before. I had the top weight from peg 110 to peg 127, though it should be said quite a few of those anglers fished for silvers. From the spit down it was a different story! 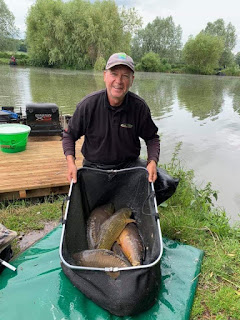 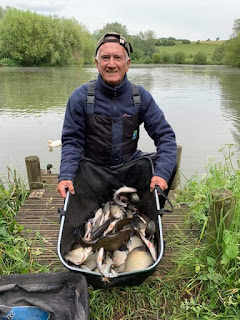 The last night was excellent, we probably enjoyed ourselves a tad more knowing we had no match and no reason to get up early. We had a great debate over wet and dry pellets fuelled by cider and much more. It was about 1am when I hit the pillow.

I woke up a tad late Friday and missed breakfast, I just packed everything up slowly and chilled out watching a few of the lads trying their luck fishing the pegs by the lodge. 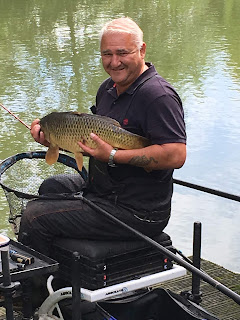 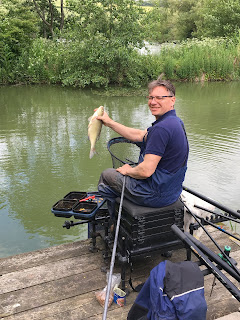 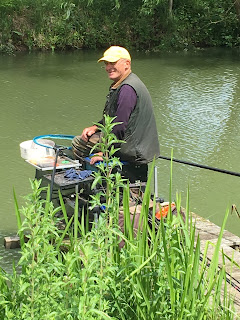 The weather was glorious on Friday, but we could not believe it was monsoon rains in Bristol! I stayed a bit longer to hope it would be gone by the time I got home. Something that was really helpful this week was the Preston Storm Shield side tray, it helped keep my bait and other bits and bobs dry, would have been a nightmare without this.

Lastly when I got home by just gone 6pm I was sound asleep, a sure sign of a great holiday, lots of fish, lots of cider and lots and lots of laughs and good times with great lads. But it was good to be home again and see the family which I had missed. 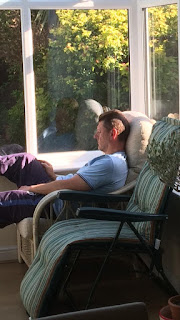