Monday morning and lie in as we had a 10am draw for the residents match on Lodge lake, 12 anglers fishing. We have breakfast in a cafe in Somerton called M&M, and the friendly owner opens early for us to have cooked breakfast. Only Chris Ollis did not join us, he is a veggie and tucks into his own made porridge in the Lodge. I was glad of the extra time in bed and it was nice getting everything ready and in place without rushing, I took 2 litres of water with me to the bank and made sure I drank it every day to rehydrate.

It was a lovely dry, still day to start with though once again showers were forecast. Lodge lake and me have history, I either seem to do really well or really shite, last time here I was on peg 73 and Glenn was on 53, we both endured a long spell without fish that time until the last hour or so. Into the famous Viaduct coffee tin and out comes corner peg 53, had this one before and kind of guessed it would be an early fish and late fish match.

Right in front is a willow tree which is extending out from the opposite bank, carp could been seen swirling here and there under it. 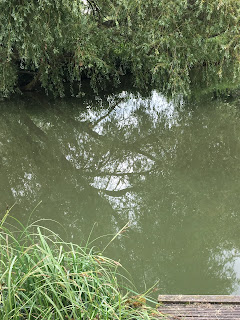 Down to your left is another tree where the water is very shallow next to the bank (or as close as you can get. I have caught a lot of fish here in the past by feeding groundbait in this shallow water. There is also the far end bank where you can try with a wag or a lead. 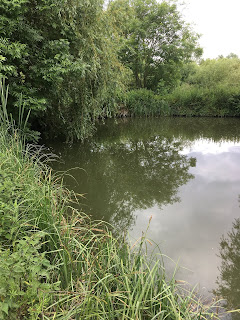 With so many carp showing I set up a mugging rig, also a meat rig to fish to the front right of the willow tree, a rig to fish hard pellet on a 4x12 with 16 KKM-B to 0.17, and a shallow margin rig. Also the lead was set up but other than one liner it will not be mentioned.

On the whistle I began with the mugging rig, and within seconds was attached to a lump. It came in far too easy and I had more trouble lifting it out of the water. No more carp left in the open water so up to the willow trying meat. First drop in and a bite and a fouler, a longer wait then a carp hooked fairly and landed. When I put this fish in the net I noticed the first carp was laying sideways at the bottom of the net, 10 mins later it was the same. I decided to inform the owners and Mat Long came down and weighed it so I could put it back. The fish weighed in at 17lb 10oz, and Mat was not concerned for it but said better safe than sorry. It lead in the the side for 15 mins but then swam off strongly. Me and my best fish of the trip... 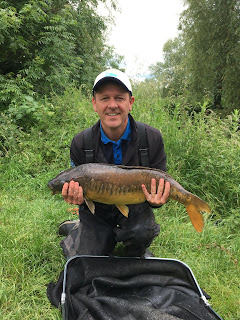 Back in and the meat line was dead apart from a small skimmer. Next option try hard 6mm pellet at 13m inline with the base of willow tree. This was just a waste, no bites or indications at all and as I had been pinging pellets I was a little shocked. I sacked this line off and decided I had to feed and fish further in and would feed about 15.5m. I went back to the meat line to let this settle, the meat line produced a little run, couple of skimmers, a hybrid and a rudd. However three and a half hours into the match and I had only added one more carp and it was very quiet. Well when I say quiet, not quite... a little further up the lake I heard a bang and looked up to see Geoff Francis top set and part of his number 4 being towed across the lake, and then next to him Woody snapped his top set! Geoff tried to retrieve the sections with a lead rod but no good, so he had to go for a swim!

Fair play to Geoff he was a strong swimmer, and than had to get himself dried out after a quick pose in his boxers lol! 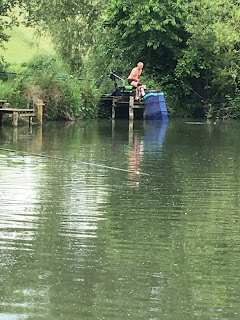 After this commotion rain started to fall heavily but I started to hook into carp on the long pellet line, as soon as I hooked one I shipped back quickly to keep them away from the tree base, the hollo 15 elastic was just right for this. I had to wait for bites but fish were now venturing out it seemed. I could also see Martin Rayet catching on 61 as well as Woody on 68. Geoff managed to lose a topset and number 4 again as it came apart this time, but he got it back without another swim. As I was laughing Karma pounced, I had a bite hit a carp shipped back quick only for the 13m section to part company with the 14,5m section, oh bugger.. I put the two section in my hand down and watched as the pole headed into the far bank. I ran round and found the pole close to the tree, borrowing Chris Ollis's landing net I managed to grab the top set, then with help from Geoff we carefully pulled all of the pole in, phew!

Back under my brolly I attached another hook length and carried on fishing long. I took the odd carp till the end and managed just the one from the LH edge which I had seen boiling the water. Match over I thought I had 105lb to 110lb, but had no clue if that was any good. I was going to be the last to be weighed in as Steve and Mat Long began with Chris on 73. I got round to see Gordon weigh in on 64 with 70lb. Martin Rayet went into the lead with 117lb 12oz, then Glenn had 108lb. My turn and all tallied up I had 115lb, so second place and another pick up.

Silvers was won by Mike Nichols with an excellent 28lb 13oz from peg 32, and Glenn got his first pick up with second in the silvers. Martin won and qualified for the all winners final. I missed out by under 3lb, that one fish caused by the pole coming apart bugger.

We hit the town hard that night and I opened my bottle of whiskey, mistake PMSL.