I woke up before the alarm Sunday morning, 5:38 to be precise when I looked at the clock, might as well get up. I'd got everything ready and in its place the night before so I was sure not to forget anything. I arrived at the draw in Puriton nice and early but still most anglers were already there tucking into breakfast. Had a good chat with the rest of the team on what we might catch and how and discussed who was going to do the draw, nobody would so I put myself forward. Only two pegs left to choose from and that was 2 and 3 so no big deal and I got 3. It is hard to tell where you have drawn as there are new peg numbers being drawn, but when I saw my name against 31 I knew it was a bad area. In fact last week team mate Andy Ottoway had it and he DNW and although 11lb won the section only a couple of 3lb weights were weighed in. Andy was on 38 and was also a bit gutted at being in the poor area again.

When I got to my peg I was quite happy as there was a little more room for me this week, a bit of gap between 31 and 32 due to some reeds growing well out into the river. On peg 32 was DGL man Martyn Howard and to my right on 30 was another Thyers and Huntspill legend Kev Perry, no mugs these two. As ever when I set up the wind was light and the view a standard Huntspill peg. 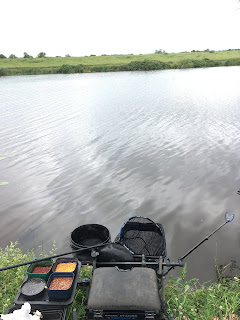 I set up my feeder rod and as last week I cast out a lead to check for weed free areas. Reeling back in the line got caught and I snapped the tip off the rod, balls. I had another tip but it is a bit stiffer but should still be OK I hoped. I used a 16 PR355 and 0.13 powerline today. I also set up the same waggler as last week, but also two pole rigs, a 0.4g and a 0.8g both with 0.08 to 20 N40

The wind was forecast to be westerly and 15mph today so I was wary of fishing too far out on all lines, even though it was still calm when I started. First thing was cast out a feeder, I did this 10 times as Kev next to me was firing out balls of gbait and I didn't want to be under gunned. Have to say his feeding was brilliant. After I fed my feeder line I then threw in 10 balls of gbait on the pole line at 11m and then picked up the feeder rod, put the hooklength on and cast out in hope. First cast on a worm and maggot and no bite, second cast no bite, changed to three red maggots on the the hook and a decent bite resulted in the thudding of bream. A 3lb brem in the net after not much more than 20 minutes, hapy days. Next two casts no bites, changed to worm and cast out but it didn't quite land in the right spot, I thought about leaving it but then decided to reel in and cast again. Another bite and another 3lb+ bream. On the hour mark I had a skimmer of 2lb and this was better than I could have hoped for. The next hour though was poor with just two hand size skimmers and then I started to get taps on maggot from bits, bream well gone then.

I tried the pole now but boy was it hard in the wind, 11m was a struggle to hold and it was hard to see the bites in the waves. When I did hit a bite it was generally a fish of an ounce at best roach, hybrids or tiny skimmers. I wasn't catching these fish fast enough and after 25 mins tried the feeder again, just a tiny perch this time. Back on the pole and it was frustrating as there were plenty of small fish in my peg but I wasn't able to sort them out, the waggler caught as well at times but casting it out was tricky as I had a tree close to me. I did try the feeder a couple more times during the match as I had no clue what was happening and thought I might need more, but it never happened again. The last 45 minutes I concentrated on the pole and waggler, and as last week the fish got a bit bigger but nothing more than 3oz and everything was swung out. It was a steady last period for me and nice to put a few more fish in the net. Maggot was best for me on the hook never had a bite on hemp or caster.

Match over I packed up, Kev had struggled and not had a bream, Martyn had a bag of small fish so I was looking good for beating them it seemed, nit sure about the rest of the section. Jon Tocknell had the scales and started weighing from the other end, it was a struggle for most and Kev Dicks was leading with 6lb 11oz (a bream and bits) until Martyn who had a big 7lb. My fish went exactly 12lb, Kev had less than 2lb and Jon 4lb 10oz which included a bream. A section win and I was really chuffed as this was a tough section and I got lucky getting those three decent fish early which gave me a big cushion. Nice to do well for the team. 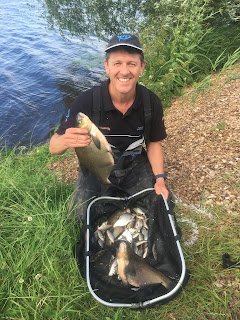 Back at the results and we had five section winners, two halfway and one dipper. That was enough to win on the day but only by 1 point from DGL, and overall we are leading by just 4 points from DGL.

Individual winner was Andy Power with 55lb of slabs from next to Woolavington bridge, also in this section Nigel Evans came 2nd with 47lb. Nick Ewers came 3rd with 41lb from the next section past these guys, and certainly the main bream shoals are currently up here. Some sections today had no bream at all.

Well that was a nice way to end a bus weekend, as a result of my section win I am fishing the third round on this venue next week, really is about time I drew on one of these bream shoals lol!
Posted by Tim Ford at 21:54