After missing this holiday last year I was back in the club this year, but instead of 6 of us we had expanded to 10 people, and would be 5 people in each 6 berth lodge. Attendees this year Mike Nicholls and his son Steve, Martyn Woodington, Mark Tanner, Geoff Francis (1 lodge) and Gordon Cannings, Martin Rayet, Chris Ollis and my room mate Glenn Bailey. I was travelling down early Saturday morning and so took the Friday off to finalise all of the gear, rigs, top sets etc, I  even packed the car the night before as it would be stuffed with not only all the gear and bait for 6 matches but also of course clothes, food and cider.

I was late getting away Saturday morning, this was due to our old cat deciding to take a crap on one of the daughter's bed, hope this was not an omen for the week ahead lol! Some of the lads were still in Canards Well when I arrived for breakfast, and we discussed the week ahead and mostly what the weather was going to do. Our first match of the week was a 13m maximum pole only on Campbell lake, 10 of us, 2 other lads who stay in a lodge every year same time as us, and some of the viaduct regulars. Not fished Campbell for a while and so didn't mind where I drew or if I fished for silvers or carp. I pulled out a peg that I do like, 116, though the tree cover on the inside is reduced after it was pruned a while back. 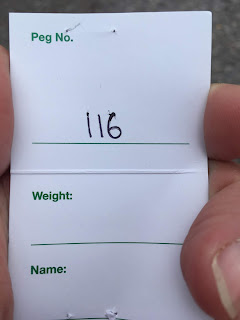 I got to the peg and the view was nice and it was good to be back on this lake again. Nobody on 117 gives you that bit of extra room, on 118 was Woody, and on 115 was Adrian Jeffery who had fished my on the Thursday and said he struggled for 50lb. 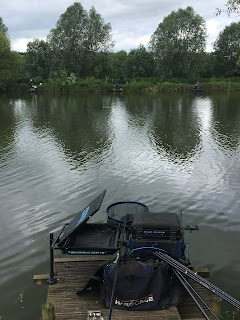 I decided to give myself a chance of catching both carp and silvers and so set up a number of rigs. A 4x12 F1 pellet with spread shot with 18 KKM-B to 0.13 for hard pellet, a 0.4g handmade job for fishing hard pellet also, but this was for getting the bait down and stable as it was predicted to be windy. I did not set up shallow rigs as I felt the heavy rain Friday would have put the carp down. A meat rig with size 12 PR478 to 0.17 and a margin rig for hard pellet were also set up. No paste rigs as I haven't done it for a while.

I began the match short on meat looking for any early carp, but after 20 mins 2 roach and a perch were not a good sign, Adrian started like me and also never had a carp. I went out to 13m with pellet and had just one skimmer and a couple of missed bites. Looking around the lake at my end nobody was catching any carp, and I took the early decision to fish for silvers best I could. Fishing top set plus two sections I started feeding 4mm pellets and fishing either 4mm or 6mm in the band and whilst it seemed slow I began to get bites and catching the odd skimmer. I wasn't catching many, but the ones I did were a decent stamp I thought, I also had a nice surprise in the way of a perch of about 1 1/2lb. I fed some 4mm pellets by toss pot out to 13m and fished out here when I felt I needed to rest the 4m line, but it was not that great on the longer line.

After 4 hours my end of the lake was still very quiet with some very good anglers struggling to get carp, for example Mike Nicholls on 121 and Joe McMahon on 123. I was pleased with my silvers catch and had only had one carp, but the last two hours the silvers disappeared and I only had a handful. What did happen was that the carp started to feed on both of my lines when I did get a bite on them it was normally a carp. I couldn't do anything so carried on, and caught them all on 6mm hard pellet. The Preston Dura hollo green 10 elastic was a little under gunned but it was a good comprise when catching the silvers, In the last 30 mins I changed to size 12 elastic. I did not bother with the margin or try the meat again as I was still trying to find the odd skimmer.

With the match over I had no clue how I had done on the silvers front, I thought I had maybe 25lb. Gordon Cannings and Chris Ollis opposite me on 125 and 126 had quite a few silvers too. The scales started on peg 132 and worked round to 110. When they got to my peg Gordon was top silvers with 24lb 7oz, my estimation was way out and I comfortably went into the lead with 33lb 2oz, and as it turned out that was enough for the silvers win. My carp went 70lb 14oz, and my total weight was 104lb, nice to start with a ton. My silvers catch below. 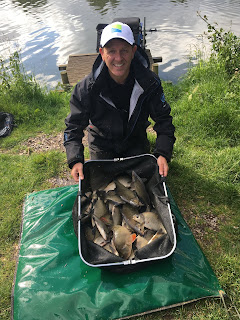 Back at the results and by Campbell standards and recent matched it had fished hard, I'm sure the drop in temperature and rain in the previous days had something to do with this. I was pleased that I had read the conditions right , fished with an open mind, and felt I'd fished a good match, it was a confidence booster.

It was great to get a pick up on the first day and qualify for the silvers all winners final, shame other than Gordon the rest of the boys had not managed to get in. I drove to the lodge and got myself settled in and all of my gear had stayed dry. We had a great night out as you would on a Saturday. 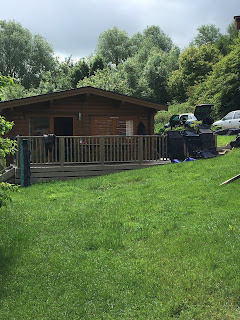