Sunday morning and it was an early start as myself, Glenn, Martin, Gordon and Mike were off to Landsend fishery for Tony Rixon's float only league. I was standing in for Mark Jefferies. Mike suggested we go to the Bear in Street for breakfast, myself and Glenn agreed but Martin and Gordon went on the longer route to Shipham.  Glenn drove me in his van which was a great help, but when we got to the Bear at 7:25 they were not serving until 8am. The lady working there was most helpful though and said help yourself to cereal, toast and fruit and she also made some lovely porridge. I was stuffed!

It was great to be back fishing the float only league, I always like fishing it but it clashes with other stuff so I have not entered it for a while. Tony always runs good matches and tries his best to make it fair for all with pegging. Speci, Match and Lake 3 were in. If I had a choice I'd like a peg on match between 15 and 21, and would like to avoid lake 3 as I never seem to do any good on that one. I was in the draw early and pulled out a decent peg on Speci, peg 40 in the corner. This peg is a struggle in winter and nobody said to me it was a flier but that I should catch carp on the end bank.

Glenn told me he fancied my peg for a few but that I would need to do some serious gardening to be able to fish next to the end bank. He was not wrong! Grass, nettles, hogweed etc was extending into the lake at least 6 feet. I cut out the area around 14.5m (path to lake gave it away) where I found a little cut back in the bank, went back to my peg and sat on my box to view my handy work. Ummm I couldn't see the cut out. The "foliage" on the bank below the cut out extend so far out it hid the cut out, so I spent another 15 minutes clearing that back as best I could. Result shown below. 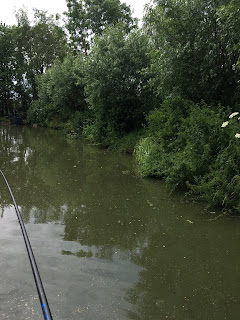 I set up a 4x10 float for fishing the depth by the end bank, about 18 inches (lake was down a foot on normal level) and a dibber for fishing half depth. Both featured 16 KKM-B hooks to 0.15 powerline. A 4x12 with 14 PR478 to 0.15 for meat at 6m, and a pellet rig for the left hand margin. I did set up a mugging rig but nothing came close. To be honest I was pinning all my hopes catching carp in the end bank.

The forecast today was for some showers, I hoped that they wouldn't be too bad as I had left the brolly behind. The match started at 10:30 and it was dry and warm. I looked for an early carp on the meat short, after 25 mins I had a roach and a small skimmer and a crucian. Opposite me on peg 25 Leon Hubbard also had a quiet start, but Lee Williams on peg 38 had 3 carp straight off from the far bank. I had been feeding 6mm pellet to the end bank and was happy to see some tails coming up. I like to give it a bit of time before going in, but as many people down at the other end of the lake were catching carp I had to go in. It was a good move and I had 4 bites 4 carp all hooked in the mouth and in the net in no time, I was expecting to foul a lot so this was a great start. I caught the odd carp and of course inevitably fouled a few in the next hour whilst Leon opposite could hardly catch. Then my peg died and Leon started catching, clearly they had moved. On peg 31 Paul Elmes was catching well as was Shaun Townsend on 36, but Neil Mercer on 34 was doing best by all accounts.

I had a tough hour and then the showers arrived, but soon after I once again had signs of the odd carp coming into the cut out. It was literally one at a time, but just as I felt I was getting them lined up I lost a fouler, had one snag me up solid, and another put the rig into a root or something in the bank. This co-incided with some real heavy rain which had me feeling damp, and it lasted for 2 hours which had me feeling wet! I did try my left hand margin a few times but only had a 12oz chub there. It was a tiring match fishing just over 14.5m for most of the time, and it was made tricky when two of my sections got stuck together so shipping was awkward. I did have a spell where I fished shallow with the dibber, this was because I couldn't hit a bite on the deep rig, I caught a couple of carp on the dibber but when the indications ended I went deep again.

It was an enjoyable match, I landed a couple of foulers, and didn't lose more than about 6. However, my section was in with Paul and Neil and both of those guys were going to beat me based upon their estimations and mine of having maybe 100lb.

Leon and Lee my nearest neighbours both had 60lb, but their section was won by Towner. I weighed 104lb 15oz which was 3rd in the section, Neil having 159lb 10oz, and Paul 123lb 2oz.  Luckily for me they were 1st and 3rd overall meaning I picked up the section money, yay. In second place was Landsend master Tony Rixon with 140lb off match lake peg 15. Clayton Hudson won the silvers with just 16lb 15oz.

The sun came out as we packed up but was too late to dry everything out, my phone was damp and not used for more photos. Glenn had struggled on peg 1 until late in the day when the fish showed up. When we got back to Viaduct the lads there told us they had only had rain for 20 minutes and they had avoided the soaking I had endured! It was decided to stay in and get a takeaway, the doner kebabs some of us had were not the best and Mike Nicholls claimed it was his first and why would anyone eat this shit, safe to say it would be his last!