Tuesday morning I awoke feeling jaded, more tired than anything, didn't feel hungover but a bit crabby I would say. We were off to Avalon today which I had really been looking forward to all holiday. However, it was deemed to be a "float only" despite the forecast of strong winds and rain, and despite my protests the night before this was kept. Travelling again with Glenn I left my lead rod reels etc in my car. Rather rash but I decided on short pole. At the fishery the water was a horrible grey colour, and in the past when it has been like this it has fished badly. This did nothing to improve my mood.

The wind was blowing towards the car park end, but the pegs on the bank from 1 to 23 were a lot better then the other side. The pegs were going to be less windy down at 23, so I go and draw out peg 5 which was the end peg. I asked Glenn to give me the van keys in case I wanted to go for a nap during the match. Very much a case of negative nelly due to far too much pop the night before!

Setting up rigs was easy, an old 4x18 Preston yellow float for hard pellet, and a paste rig both to be fished at 8m, as far as I cared to fish. A rig to fish paste in the RH margin which was only just shallower than at 8m, i.e. nearly 7 feet deep. It was a cold day, no rain as yet, but the Northerly wind was chilly, I had seen a couple of carp top by the island and wished I had brought some rods. On next peg 7 Geoff offered me a spare made a pellet wag rod, it was in Mark Tanners van, so I walked down to Mark on peg 20 to get his van keys. This did not improve my mood as his peg was very calm whilst on 22 Glenn had virtually no wind and was going to fish paste at 13m.  I got the rod and changed the waggler to a 3.5 swan version, I did mention to Geoff that the reel line didn't look great. My view with the gap where the carp were seen topping now and then. 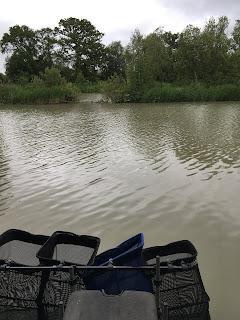 On the all in I cast the waggler towards the gap, it landed some 10m to the right, but still went under! I landed a little 3lb carp. Another 10 casts, no bites and the wind was killing it. Onto the pole at 8m where I fed some 6mm pellets, a quiet 10 mins and then two missed bites before getting one in the mouth and a carp in the net. From now on little fizzes began showing the presence of fish in the swim and it was looking better than I thought! Geoff had started on paste and hooked 5 carp loosing 4 foulers. I was not getting as many bites or hooking as many fish but still got ahead of Geoff with a good carp of 8lb. The lake was towing against the wind, and the hard pellet rig was working well keeping the bait still, However, my lack of confidence in paste fishing (and knowing that in reality I couldn't beat Glenn fishing his game) meant I persevered with hard pellet a bit too long, suffering a few foulers and the odd one in the mouth. In the end I picked up the paste rig and gave it a go, and all of a sudden it was like being acquainted with an old friend.

Fishing the paste was by no means the answer to the missed bites and foulers, but I would say the foulers were much less. I landed a nice commons up to about 12lb, and then had another close to double that as I had its head over the net spat the hook out and swam away, I may have swore. When bites went a bit iffy and the wind dropped again I decided to have 6 casts on the waggler and no more. On the 5th cast the float buried, I struck and the main line snapped, "sorry Geoff that line is fooked" I said or something similar. Back on the 8m pole line the tow was really bad now right to left and fishing the paste trying to keep the float visible was trcky, both Gordon and Martin were catching well, but we were all playing catch up to Glenn who was a long way in front. I caught on the pellet rig but was still missing bites / getting liners. Whilst one of Vic Bush's helpers was behind me I hooked a large fish which ended up doing me in the margin, not long after a large ghostie swam out, guess that was it then! I did manage to catch three carp in the margin on paste but it was a wait and I kept going back to 8m.

As the match was coming to an end I hooked another good fish on paste, I looked at my watch and there were 5 mins left, so just take your time I said. With 2 mins to go up came a near double common, and same as earlier hooked pulled out just before netting it. Hot head I was I took the pole apart quick to go in the margin, and in my haste the number 4 section slid into the lake, I dived for it, missed it, hit my head on the platform and broke a top set. Match over. Those last two minutes were to prove costly in more ways than one.

As expected Glenn won from peg 22 and the paste master was back on form with 170lb, the night before Martin said he would win. Second was Gordon on peg 9 with 151lb and third was Martin Rayet with 132lb from peg 11. Top 3 paid out, I was 4th with 127lb, ouch!

Chris Ollis had a great day on skimmers / bream to end with 41lb of silvers for the win. Geoff had struggled next to me on carp in the end but he took a lovely 6lb 1oz bream. One amazing thing today it never rained on us, but it was cold and I really felt a chill and could not get warm for hours.

The last 2 minutes of the match were as far as I am concerned the only bad part of the holiday and a more positive attitude would have I'm sure got me into third if not second, losing 20lb at the net was though bad luck. I was dog tired from the night before and feeling cold and after only 2 beers I went to bed early, a good decision as I needed a mid week battery recharge and was feeling great the next morning. The view from the lodge bedroom even when raining is a pick me up. 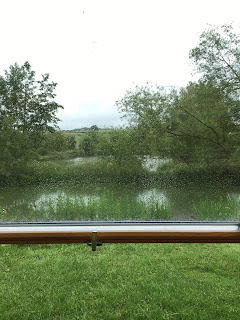