Wednesday morning always means the short pole match on Campbell lake. You can only fish with a top set and 3 more sections of your pole, all the rest of the pole must be kept in the holdall. It can be a great match but if the carp stay out in the middle it can be a long wait for bites. Pegs in a corner, or with an empty peg, or the spit are usually favoured in this match. Based on Saturday a peg in the car park end would be best. Well I drew as far away from there as possible, peg 121 on the top bank. It is a peg that is not often in the draw bag but Mike Nicholls was on it Saturday and struggled for carp and wished he had fished for silvers. 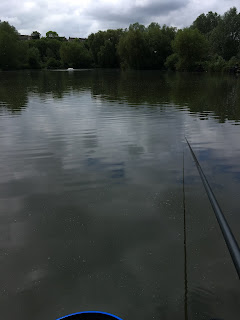 Colin Dyer was on peg 119 and and Steve Nicholls on peg 123, I would probably reduce their chances of bagging being on the end bank. The lake was flat calm certainly as far as I could see but there was a little breeze blowing down the lake that was ever so slight later on. Had it been a normal match I would have considered fishing long shallow, but today not so. I decided to approach the peg in a similar way to Saturday's silver bashing. I would feed two lines on top set plus 3 with 4mm pellet and look for silvers, but be prepared to switch to carp if they were the better option. With it being so calm I could not see the margins throwing up anything and did not target them. Rig wise my light 4x12 pellet rig, a paste rig, a slapping rig and that was it.

As per last match on Campbell it started slowly for everyone at this end of the lake, and it was difficult for me to catch skimmers but enough to keep me going, then I had a carp. I wasn't getting much in the way of indications or silvers and with Mat Toomes on 125, Chris Rolfe on 116 catching silvers I decided to change to feed 6mm pellet on the LH line. Throwing the bait in it didn't take long for this to bring in the interest of a carp or two signalled by some bubbles. I caught 4 or 5 on 6mm pellet and then a couple of foulers seemed to push them out and I struggled for a good 40 minutes.

Glenn told me he was doing well on the paste on peg 112 (I'd already said he would win off that peg) and that the anglers opposite him all had a few carp. I needed to up my game and switched to the paste and after a bit of regular feeding got the carp back and nailed a quick 4, then it was a spell of lots of fly under bites and not hooking a fish! I guess this is where my lack of paste fishing let me down as I couldn't work out how to solve this. However, things improved in the 4th and 5th hour with many decent double figure fish and I thought I was going to need 5 nets at this rate. Never think that, the fish departed me in the last hour and I only had 2 carp, meanwhile Steve and Colin finally started catching carp. Despite my poor lat hour I knew I had by far the best weight at this end of the lake and no matter what I would get my section, but the scales would tell the tale.

My silvers went 13lb 15oz, and my carp 139lb 10oz for a total of 153lb 9oz. Those last two fish were in one net and weighed 22lb. As it turned out I did get the section money because Glenn won with 167lb 5oz, and in second was Martin McMahon on peg 130 with 154lb 4oz, beating me by 11oz bugger! That said being pipped again was not like yesterday, I felt I had a good match and had lost no fish at the net, I was not gutted at all. Poor old Steve on peg 123 snapped a top set and went over in his carp net enough to get disqualified, but it didn't cost him anything other than his own embarrassment. 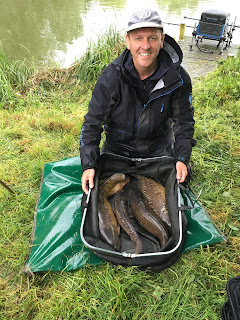 The silvers was a close run affair with Mike winning it with 37lb 7oz from peg 135 and Chris Rolfe having 36lb 10oz.

Back to the Lodge decent weather again today so happy with that, the Canada Geese and goslings were also happy and liked the grass by the lodge. 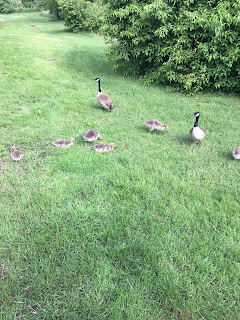 It was curry night in the littlest Indian restaurant I've ever been in, 10 of us and another 6 people is all that you can get in. Food was great and the company was too of course. After some more cider we returned back to the other lodge and raided their cheese and cider supply.